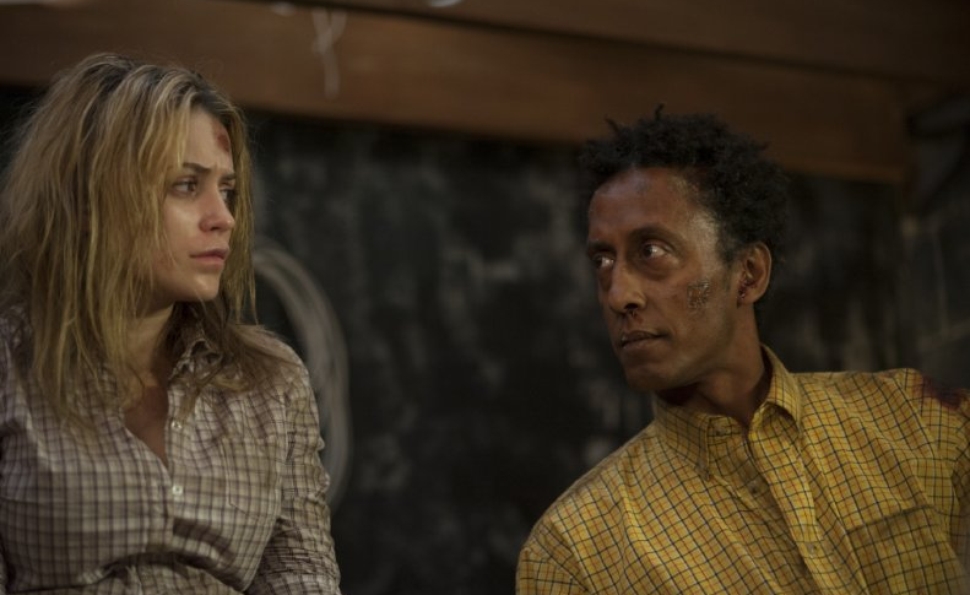 Answering the age-old nuclear-apocalypse question, “What Would Edward Furlong Do?”, Aftermath holes itself up with nine Texans in a country farmhouse cellar in the days immediately following the start of World War III. In that confined space, doctor Hunter (C.J. Thomason) tries to keep the rest of his compatriots healthy and sane, though he’s dealing with a gunshot wound, a young boy who’s gone blind courtesy of an atom-bomb blast, an old man wheezing and coughing due to diabetes (among other things), a pregnant woman, and that expectant mom’s husband Brad (Furlong), who’s prone to losing his cool and throwing violent temper tantrums. Brad is the de facto pseudo-redneck wild card in this otherwise staid, levelheaded group of survivors, and consequently the most interesting. His new roommates are such a nondescript bunch that his regular outbursts of nonsensical anger and frustration—whether he’s ranting about the government’s response, or freaking out about his wife’s deteriorating condition—at least give the proceedings an occasional jolt of crazy.

Like the cellar’s lights and short-wave radios, powered by car batteries, Peter Engert’s film is short on power. It’s sabotaged by a script (courtesy of Christian McDonald) that isn’t interested in using its trapped-like-rats scenario for anything more than standard-issue what-if spookiness. Rather than having its characters’ circumstances reveal something about societal dynamics or human nature, Aftermath avoids depth; Engert casts his material in strictly suspenseful terms. While it would undoubtedly be harrowing to be trapped underground as the country succumbs to cataclysmic radiation fallout, these folks’ unavoidable fate renders any tension moot. Without anything larger to convey about mankind—say, about people’s impulses toward sacrificial altruism, or selfish greed and cruelty, or hopeless despondence—the story quickly grinds to a halt, offering up scene after scene of strangers bickering, listening to uninformative radio broadcasts, and shooting random intruders intent on taking over the cellar.

As Hunter and company’s facial sores get worse, and after one psychotic woman bursts into the cellar and bites simple-minded Jonathan (Ross Britz), it seems like Aftermath might be turning into a radiation-zombie horror story. Alas, such a potentially pulpy avenue is avoided in favor of a drearier descent into decay and tragedy, with some characters sadly giving up the ghost, while others chat about their dwindling chances. Awash in exposition-heavy dialogue, punctuated by the occasional Wizard Of Oz reference, the film provides no meaningful background on its characters, and even less drama, since it’s clear from the outset that irradiation doom is inevitable. Through it all, Engert shrouds the action in murky blacks that reflect his tale’s morose atmosphere while further exacerbating its dullness. So it’s a welcome surprise when, during the climax, Hunter and his remaining friends exit their bunker to confront assailants. At that point, Engert suddenly breaks out a stylistic flourish that involves zooming into characters’ freeze-framed faces—a sign that, ultimately, even he is happy to finally escape his film’s cramped, constrictive setting, if only for one brief bit of ultra-violent mayhem.