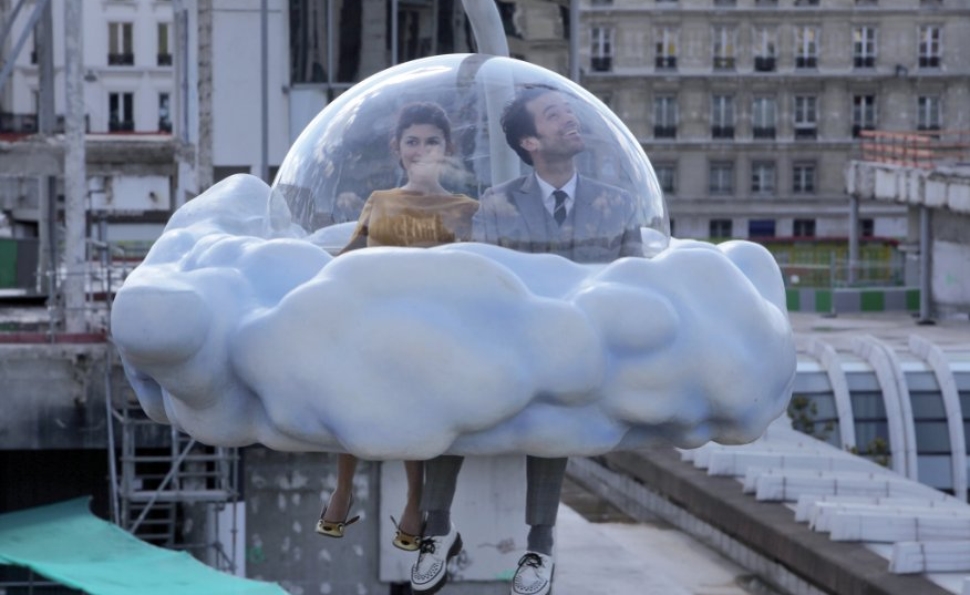 Michel Gondry’s Mood Indigo so perfectly represents the aesthetic he introduced as a groundbreaking music-video director—and later refined as the director of films like Eternal Sunshine Of The Spotless Mind and Be Kind Rewind—that it’s hard to believe it didn’t spring wholly from his imagination. Mood Indigo pushes Gondry’s sensibility farther than the whimsy-averse may be able to tolerate, but the film has its roots in Boris Vian’s 1947 French novel, alternately known as Froth On The Daydream or Foam Of The Daze. Vian’s plot-light, idea-heavy novel is the kind of book many would deem unfilmable, but that hasn’t kept it from being adapted twice before, as 1968’s L’Ecume Des Jours by French director Charles Belmont and as 2001’s Chloe, by Japanese director Gô Rijû. The novel was adapted into yet another language and another medium when the Russian composer Edison Denisov turned it into a Russian opera in 1981. Yet despite the source material’s long, impressively international history, it still feels like something only Gondry could have dreamed up.

The novel’s malleability has a lot to do with a plot so doggedly simple, it affords endless room for interpretations and whimsical flourishes. Reduced to its bare outlines, Mood Indigo follows a dynamic as old as time: boy gets girl, boy loses girl, boy is sad. The boy in question is Colin (Romain Duris), a wealthy young man who enjoys a life of absurd, even surreal privilege. Colin lives inside a magical home that suggests a Gaelic version of the set of Pee-wee’s Playhouse, with a little of David Cronenberg’s Naked Lunch thrown in via touches like an alarm on Colin’s wall that sprouts insect legs and starts climbing the walls.

Colin’s enormous wealth ensures that he never needs to work. So he spends his days making “Pianoctails,” alcoholic beverages created through the music of Colin’s homemade pianoctail contraption; palling around with his literature-obsessed buddy Chick, an obsessed acolyte of a Jean-Paul Sartre-like writer and philosopher named Jean Sol-Partre; and enjoying delicious, seemingly sentient meals, prepared by his brilliant cook, manservant, and lawyer Nicolas (Omar Sy).

Then one day, Colin meets and falls in love with charming pixie Chloe (Audrey Tatou), and his aimless but happy life gains direction. The two enjoy a whirlwind romance and marry, but Chloe falls terribly ill once a water lily begins growing in her lungs, a potentially fatal condition that can only be cured by surrounding the lily with more flowers.

Many fantasy films take great pains to establish the rules of their world before delving deeper into homemade worlds of make-believe. Mood Indigo, on the other hand, makes no effort to ground its fantastical world of whimsy in any recognizable reality, no matter how flexible or loose. Instead, Gondry throws audiences into the deep end and hopes they know how to swim.

Mood Indigo inhabits a world where literally anything can happen, liberated from the dictates of other films, and unbound by the laws of gravity. It’s a world where people’s legs expand to freakish proportions like reflections in a funhouse mirror for a dance scene, then contract back to normal when the music stops. If the film is bound by any logic at all, it’s dream logic. Mood Indigo has the quality of a waking dream, and it induces a state of pleasant disorientation.

In many ways, the film represents a return to the freeform imagery and Rube Goldberg invention that characterized Gondry’s music videos, particularly his clip for “Lucas With The Lid Off.” Though the characters rarely break into song, music is essential to both the theme of the film and its jazzy romantic vibe; at times, the movie combines the sensibility and loose plotting of a brilliant music video with the simple story of a cinematic musical.

Mood Indigo is fizzy and ebullient in the early going, but as Chloe gets sicker and sicker, and Colin grows poorer and poorer trying to raise money to pay for her operations, the whimsy grows darker and more gothic. A delightful romp that initially seems to inhabit a world without death or suffering grows increasingly gloomy, and the first act’s goofy, mind-melting fun gives way to something much more morose.

As the film grows bleaker, its thin, sometimes clichéd conception of its characters becomes problematic. For all Tautou’s gamine charm, her pixieish dream girl seems to exist largely to facilitate Colin’s emotional growth, just as Nicolas seems to devote all his remarkable resources to cheering up a depressed white guy. These characters exist largely as vehicles for Gondry and Vian’s flights of poetic fancy, which is fine when the film is joyful, but grows more distressing once real issues like illness, death, and loss come into play.

Mood Indigo feels unmistakably minor, more Science Of Sleep than Eternal Sunshine. Gondry’s latest demands a high tolerance for whimsy, and will undoubtedly prove anathema to his skeptics. Yet for those willing to abandon logic, suspend disbelief, and give themselves over to Gondry’s crazy, deeply immersive world of play, the result is a wildly inventive head film that’s mood-altering and mind-expanding in its own right.