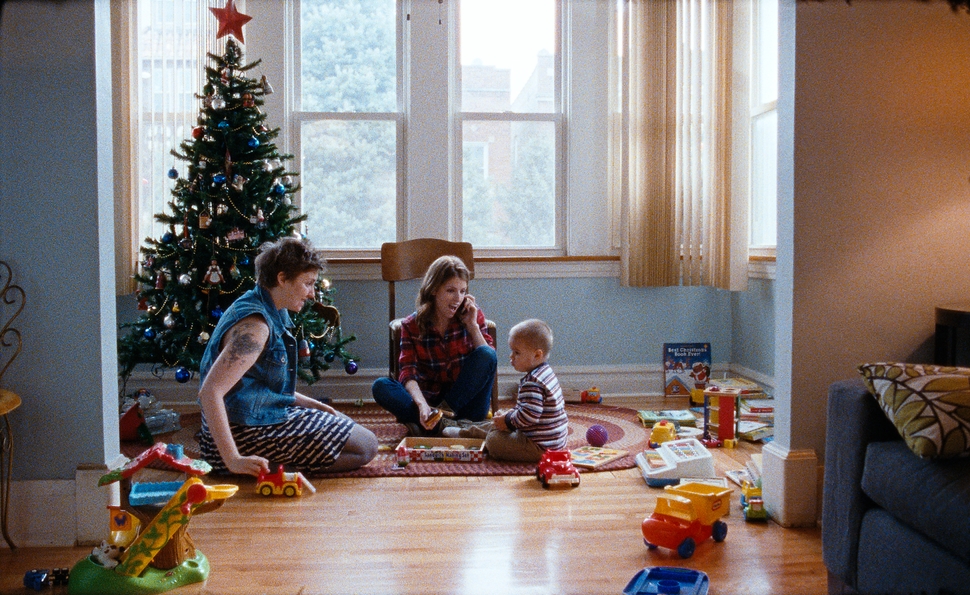 It’s difficult to praise the out-of-season Yuletide charmer Happy Christmas without also denigrating the career of its writer, director, and co-star, Joe Swanberg. One of the leading lights and most controversial figures of the mumblecore movement, Swanberg is so damnably prolific that his movies tend to blur together into one mega-mix of awkward conversations in interchangeable apartments between twentysomething bohemian types played by Swanberg’s filmmaker friends. It doesn’t help that the same actors, scenes, and conflicts reappear in film after film. That only contributes to the sense that Swanberg isn’t churning out new movies at a Fassbinder-like clip so much as he’s making the same movie over and over.

Swanberg’s earnest little indies aren’t necessarily good or bad. They just are. A notable exception is Happy Christmas, which seems to mark a bold leap forward for him, even as he sticks closely to his well-defined, though not necessarily immaculately honed, aesthetic. Swanberg isn’t doing anything new with Happy Christmas, but sticking to the same non-formula formula this time around yields unprecedentedly inspired results. Everything about the film represents a big step up: the music is better, the performances are invariably polished, even the house where much of the action takes place has a sense of character and personality missing from the homes of his previous films.

The always-winning Anna Kendrick, who visited this territory alongside Swanberg in Drinking Buddies in 2013, stars as Jenny, an adorable mess of a twentysomething who breaks up with her boyfriend around Christmastime and sweeps into the cozy domestic lives of her brother Jeff (Swanberg) and his stay-at-home novelist wife Kelly (Melanie Lynskey). Jenny is trying to get her life in order and figure out whether she wants to move to Chicago, but mostly, she drinks and smokes pot and hangs out with her good friend Carson (a very funny, charming Lena Dunham) while stumbling into a relationship with charismatic babysitter and sometimes pot dealer Kevin.

Kevin is played by the perpetually earnest Mark Webber, who between his role in Save The Date and his performance here, is establishing himself as a preeminent heartthrob of the independent-film scene. As in Save The Date, Webber delivers a performance that’s funny and endearing, but also genuinely sexy. Webber has great, instant chemistry with Kendrick, and there’s a sly gender reversal at play here in that Webber occupies the role generally played by women in romantic comedies. He’s the sexy, freewheeling object of desire, while Kendrick inhabits the more typically masculine role of the sexual aggressor.

Happy Christmas does justice to both sides of the domestic divide. Kelly worries about Jenny’s irresponsibility and sees it through the filter of her own life of routine and obligation. But there are wonderful moments throughout where these two dissimilar figures find common ground, most notably in a fun subplot involving Kelly’s impractical but amusing ploy to get her sister-in-law to write a Fifty Shades Of Grey-style bestseller that will give her the money to pursue her dreams of writing full-time.

Happy Christmas appears to be just as shambling and aimless as the rest of Swanberg’s films, just as filled with dead time, ennui, and uncomfortable conversations that don’t seem to be going anywhere, or serving a useful purpose. Yet the film benefits from a surprising tightness and cohesion. Swanberg has always sought to transform the messy raw material of real life into art, and here, he succeeds on a level not even suggested by his previous work. Happy Christmas offers the best of both worlds: It has the ramshackle, slice-of-life, ragged verisimilitude of mumblecore at its best, but fused with a story with actual momentum, unfailingly excellent performances by smartly cast professionals, and what at least feels like a beginning, middle, and end.

Kendrick deserves much of the credit for the bump in quality. It’d be tempting to call her performance here revelatory and star-making, if she wasn’t already a star, and if her charm and magnetism weren’t already so self-evident. Like Jenny Slate in Obvious Child, Kendrick embodies a new romantic-comedy archetype that’s all the more winning and lovable for the way it exposes her anxieties and vulnerability. The scenes of Jenny hanging out with her brother or her best friend or her potential new boyfriend are wonderful. Swanberg adds elements of conflict to the third act to nudge Jenny in the direction of moral growth and maturity, but the nudging is gentle, and the conflicts feel organic and real. Even more than Drinking Buddies, Happy Christmas is a real hangout movie. The Christmas season is made for those kinds of movies, and Happy Christmas has at least a shot at becoming a different kind of Yuletide tradition.