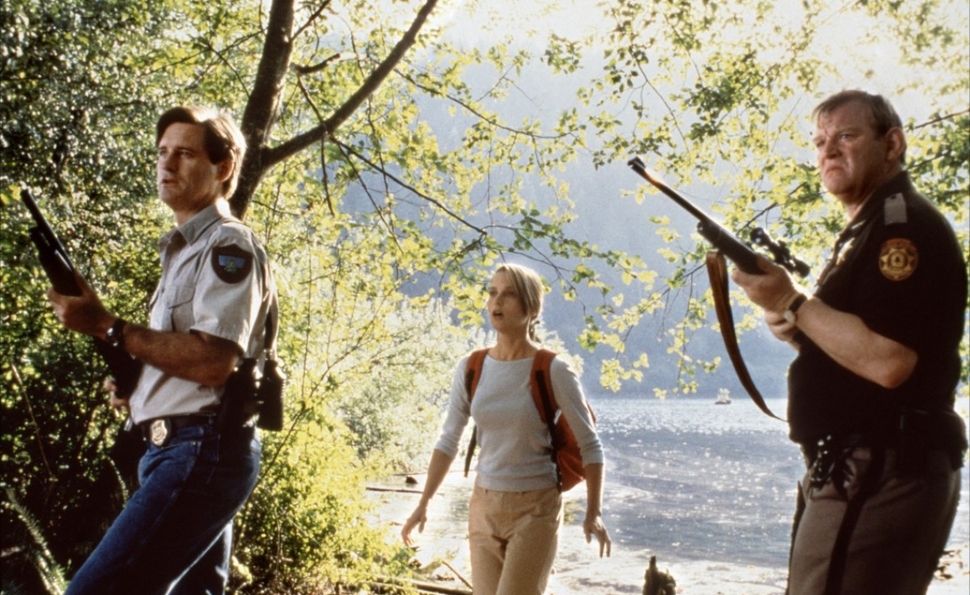 In the 1999 horror-comedy Lake Placid (just calling it “horror” is comedy) the state of Maine is treated like the Yukon or the Outback—not the northernmost part of quaintest New England, but a place so impossibly remote that only the most eccentric hicks could live there. This perspective reeks conspicuously of a person who knows Maine as the faraway place their lobsters are flown in from, and when the characters open their mouths, this perspective reeks conspicuously of one person in particular: David E. Kelley. At the time Lake Placid was made, Kelley—who happens to have been born in Maine—was the undisputed king of the banter-filled hourlong procedural, with Chicago Hope, The Practice, and Ally McBeal all in some phase of their successful runs. Kelley could be described as both a very busy man and a very lazy man: Busy because he had three shows and two movies (Mystery, Alaska was the other) going at once, lazy because they sounded more or less the same. With Lake Placid, he exports his annoying characters to the state from which he imports his lobsters.

Or one annoying character, anyway: an Ally McBeal type played by Bridget Fonda. When a 30-foot prehistoric crocodile devours a scuba diver in the largely unoccupied waters of Black Lake in Maine, Fonda’s Kelly Scott, a paleontologist at the American Museum Of Natural History in New York, is sent to examine the creature’s tooth. Everything is a bother for poor Kelly, who roils from the single-engine flight into town, sprays clouds of Raid in the air to kill off mosquitos, slaps the genial local sheriff (Brendan Gleeson) twice for hauling a decapitated moose head on their boat, and generally acts like an uptight city slicker. She has a David E. Kelley reason to be upset—the guy who just dumped her happens to be her boss, who wants time with his new girlfriend—but she loosens up as she spends more time with her croc-hunting mates. That includes Bill Pullman as Jack Wells, an affable fish and game officer, and Oliver Platt as Hector Cyr, a rich crocodile enthusiast with money to burn on a helicopter boat and other high-tech equipment.

Though Lake Placid was directed by Steve Miner, whose credits include two Friday The 13th movies (the second and third) and Halloween H2O, it’s a writer’s movie through and through, and Miner serves more as a house director, as he occasionally did for Kelley on Chicago Hope and The Practice. There are some intermittent attempts to drum up some Jaws-level suspense, with a score (by John Ottman) that has some detectable notes of John Williams in its DNA. But it’s fair to say that the few people who saw Lake Placid in 1999 felt perfectly safe going back in the water afterward. The great Stan Winston created a magnificent beast for the occasion—massive, speedy, yet suggestive of a millennia-old reptile—but it’s mostly a punchline to a repeated visual joke, as the croc snatches a bear or a cow from the shoreline.

The emphasis in Lake Placid is more on comedy and adventure than on scares, and all the salty one-liners come through Betty White as a widow, the lake’s only resident, who doesn’t understand why these outsiders care so much about capturing or killing the crocodile. (She isn’t alone.) “If I had a dick, this is where I’d tell you to suck it,” says the then-septuagenarian actress, presaging her resurgence as a tough talker in movies, talk shows, and TV shows in the next century. Foul-tongued grannies are a comic mainstay as ancient as the crocodile, but at least White summons the camp energy that Lake Placid is fecklessly seeking. It’s neither Jaws-scary nor Tremors-funny, but genre-movie fans in 1999 did have a chance to feast on the year’s talkiest, most neurotic horror movie. They respectfully declined.

A half-hour retrospective documentary gathers everyone willing to talk about Lake Placid today: Pullman, Miner, cinematographer Daryn Okada, and editor Marshall Harvey. Kelley is present in his absence. There’s also the five-minute EPK featurette from its original release, as well as trailers and TV spots, including one hailing it as the next Anaconda. Another short feature shows test footage of the crocodile. It mostly just floats in the water, looking pretty chill.