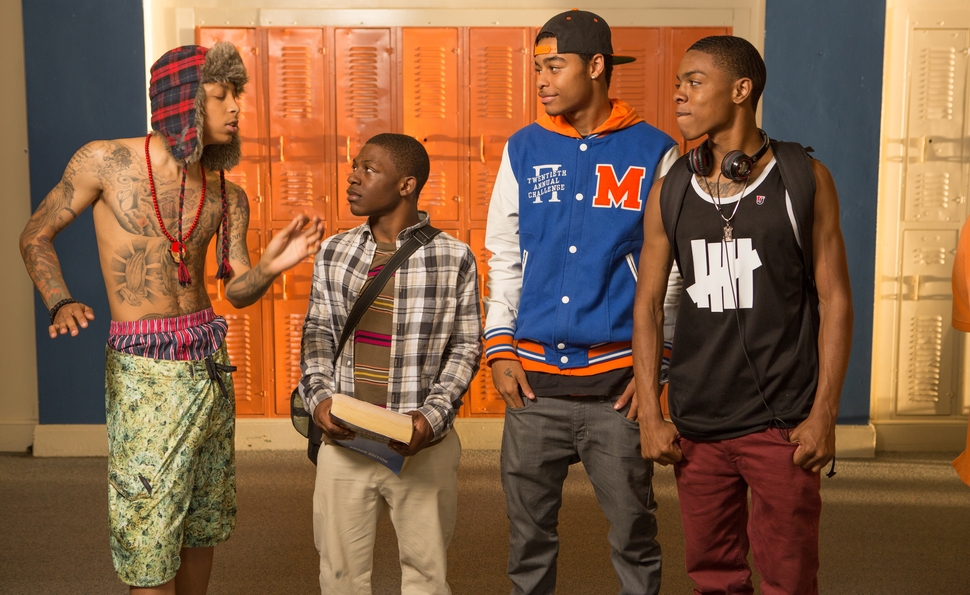 In hip-hop and R&B, there’s an unfortunate tradition of famous comedians popping up in music-video interludes that could charitably called “skits,” and less-charitably called “random bits of woefully unfunny comic business.” Like seemingly all hip-hop-related skits that weren’t engineered by Prince Paul, these sad attempts at comedy are generally unbearable. They serve no purpose other than establishing that a video’s director or star knows a reasonably successful comedian willing to spare three hours to put on a silly wig and dumb costume and play the guy who won’t let a rap star and his posse into the club, or an old man who yells at the star from his lawn chair.

School Dance, the abysmal directorial debut of one-man industry Nick Cannon (who also co-scripted, with Nile Evans), suggests 77 minutes or so of these woeful music-video sketches stitched together into something not really resembling a movie, padded out by extra-long credits featuring a fake music video for a morbidly obese Chunky A-style rapper. The film’s resemblance to a music-video skit is heightened by a cast filled with music-video-skit faces like Mike Epps, who has appeared in videos from such artists as Alicia Keys, Noreaga, T.I., Ice Cube, Hurricane Chris, Angie Stone, and Kendrick Lamar.

Epps brings the same absence of commitment to the role of horndog Principal Rogers in School Dance that he does to his music-video cameos. It’s as if Epps arrived on set in the requisite dumb wig (this time a graying one that combines an afro and a ponytail) and silly outfit (a tacky 1970s-style suit) expecting to do a few hours of improv for a Nick Cannon video. He was then informed that he would be appearing in a sizable supporting role in a feature film, and decided his entire performance would consist of ogling a teacher’s ass in a tight skirt and screaming at students to stop looking at his bitch.

Epps isn’t the only music-video cut-up donning a silly wig and a dumb outfit as a favor for Cannon. The ascendant, wisely uncredited Kevin Hart looks like an extra from Don’t Be A Menace To South Central While Drinking Your Juice In The Hood, with his Eazy-E mop of Jheri curls tucked under a Raiders hat. Hart plays a would-be thug who hangs around the high school where the action takes place. Katt Williams, meanwhile, comes with his own signature silly hairstyle, and sports prison blues as the incarcerated father of the film’s high-school protagonist.

Bobb’e J. Thompson, so charming as a child actor in Role Models and such a nothing here, stars as Jason Jackson, a high-school freshman so unbelievably boring that not even having an imaginary Marlboro Man-like mentor only he can see makes him even a little interesting. And the mentor is played by the almost-always-great Patrick Warburton, too. (The “almost-” qualifier comes into play here.)

Jason’s ambitions are as hopelessly clichéd and boring as he is: He wants to fit into the hip, popular clique of creepy misogynists known as The Rangers (cost of entry: the panties of one of the members of The Sweet Girls, their girl-clique counterparts, who double as a bland pop-dance outfit) and win the heart of dream girl Anastacia (Kristinia DeBarge of the DeBarge musical dynasty).

Like Anastacia, the women of School Dance are oversexualized to an absurd degree. The only exceptions are Jason’s pistol-packing, shower-cap-wearing, drug-selling, Madea-wannabe mother (Luenell) and a teacher of Jason’s played by Tacey Adams, who speaks in a stiff version of profane black slang despite being a proper-looking middle-aged white woman, a gag that hasn’t been funny since Barbara Billingsley did it in Airplane! The teacher character is even named Mrs. Billingsly, which suggests Cannon has at least seen Airplane!, even if he learned nothing from it.

Cannon is a big believer in the power of repetition. He apparently nurses a strong belief that if a gag isn’t funny the first time around, it will somehow become hilarious the eighth or ninth time it’s repeated, whether it’s a zaftig female police officer with the unfortunate last name of P’Eniss, or her partner (Jim Breuer) having an LSD freakout after consuming pot brownies.

A smarter movie with a conscience might question whether becoming part of a clique of creeps who live out the misogyny of their awful rap songs in their day-to-day life is a worthy goal for an earnest young man. But School Dance is too immersed in its own sexism and caricature to question its characters’ hateful attitudes. From mothers to would-be lovers, School Dance has a deep streak of sexism that extends to Luenell breaking the fourth wall at the end and pointing a gun at the screen while issuing a series of threats to the filmmakers, other characters, and the audience. But no threat she offers is more terrifying than the possibility, however unlikely, that she and the rest of the film’s random assemblage of nincompoops will return in a sequel no one wants.