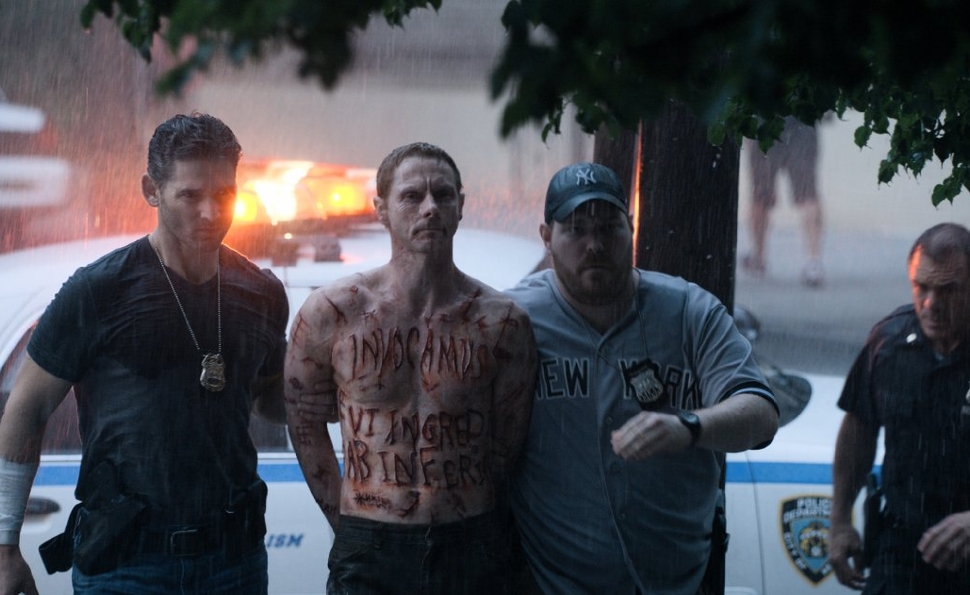 Deliver Us From Evil

Director Scott Derrickson is a horror maximalist, the type of filmmaker who’s skilled at creating moody atmosphere, but not for the purpose of slow creeps or understated effects. He does mayhem at full volume. For example, in 2005 and 2006, two films adapted the same true story of a sheltered young woman from a religious family who was supposedly possessed by demons and given an exorcism. The German film Requiem subtly questioned whether the victim’s condition was psychosomatic, the result of trauma related to her upbringing and her anxiety over being an independent adult in a new place. Derrickson’s The Exorcism Of Emily Rose, by contrast, chucked the “was she or wasn’t she” question of her possession, and married intense demon shock effects with the implication that science could not explain such a religious phenomenon. It was fire and brimstone in Dolby surround.

Derrickson’s scare tactics were employed to much greater effect in 2012’s Sinister, a hard-R shocker that felt like a much-needed breath of toxic air, conjuring up some gut-wrenching images and rebuking the PG-13 timidness that had stunted mainstream horror for the better part of a decade. But Deliver Us From Evil, another fact-based demon-possession tale that Derrickson co-wrote with Paul Harris Boardman, finds him firmly back in Exorcism Of Emily Rose territory, borrowing effects from William Friedkin and David Fincher, and adding the kitchen sink atop that. This is blockbuster horror, a Dateline NBC segment blown out into a catch-all gothic extravaganza that includes references to Iraq and PTSD, the Bronx Zoo as a gateway to hell, a heroin junkie turned über-hip Catholic demonologist, and the deepest consideration of Jim Morrison’s mind-expanding lyrics since Oliver Stone’s The Doors.

Playing a tough-guy cop so generic, the script cracks wise about it, Eric Bana stars as Ralph Sarchie, a Bronx policeman who follows his “radar” through a dark, rain-saturated urban pit right out of Fincher’s Seven. One night, he and his partner (Joel McHale) take a domestic-disturbance call at an apartment where a deranged Iraq veteran resides with his scarred, glazed-over, seemingly abused wife. Then they take a separate call at the blacked-out Bronx Zoo, where a mother has thrown her baby in a ravine, and a suspicious hooded figure is spotted in the lion enclosure. More weirdness follows, all tied to an ancient evil imported from three veterans’ Iraq experience, and Sarchie, his aggrieved wife (Olivia Munn), and their young daughter start noticing spooky occurrences at home, too. Searching for explanations, Sarchie gets them from the mysterious Mendoza (Carlos’ Édgar Ramírez), a chain-smoking Catholic priest who specializes in demonology.

Sarchie and Mendoza make quite a team—even their names sound like the title of a buddy crime-fighting show—and Derrickson lards the film with brooding conversations about lapsed faith and the battle between good and evil. Deliver Us From Evil takes this hokum extremely seriously, but any serious consideration of its themes are overwhelmed by the aggressive deployment of horror clichés, from defiled religious iconography (beware the cat crucifix) to a soundtrack that buzzes with pops of distortion, jack-in-the-box music, children and animal noises, and the low rumble of Satan’s helpers. Deliver Us From Evil accepts Sarchie’s conversion story at face value, but the particulars are mostly shopworn elements from Seven and The Exorcist, all directed at a cop-on-the-edge type who’s completely susceptible to them, despite his professed skepticism. Derrickson gives it everything he’s got, but when a film offers “Break On Through (To The Other Side)” as a spiritual pathway, it’s hard to take seriously.