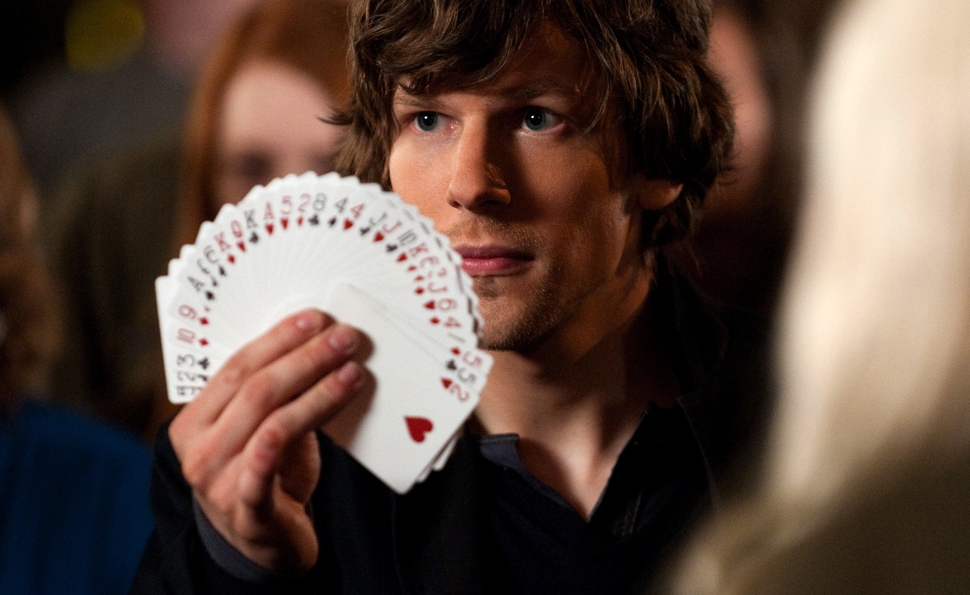 Now You See Me

Movie magic and stage magic didn’t used to be so different. Whether it’s Jean Marais stepping through a mirror in Orpheus or George Lucas using miniatures to create a mile-long spaceship, practical effects, like a magician’s illusions, trick the eye into thinking it’s seeing something it isn’t. That changed with the introduction of CGI, which now makes virtually any visual feat possible. Consequently, special effects have become more overwhelming, but less surprising. Since it’s now possible to create whole worlds out of digital bits, the answer to the question, “How did they do that?” always has the same answer: “Computers.”

CGI can produce wonders, but misapplied, it can make visuals appear insubstantial and films feel ungrounded. Now You See Me—a lighthearted caper film in which a quartet of magicians perform a long, elaborate public con for reasons that remain a mystery for much of the movie—underscores the problem by portraying a host of ostensibly possible illusions via CGI gimcrackery. In an early scene, escape artist Henley Reeves (Isla Fisher) chains herself into a tank of water, then emerges unscathed after she’s apparently devoured by hungry piranha. It would look like a neat trick if what made it to the screen resembled physics as we know it, and not a feat only possible with heavy digital assistance.

That’s a distraction throughout most of Now You See Me, which never seems to feel confident in its own clever premise. When not bending reality via special effects, director Louis Leterrier swirls and lunges with the camera as if a moment of stillness would send viewers out to the lobby. That may be because, after The Incredible Hulk and his Clash Of The Titans remake, Leterrier has forgotten how to film the real world, as he did to trashily entertaining effect in the first two Transporter films. Or it may be the film performing its own sleight of hand, whisking viewers between scenes and characters quickly in order to disguise all the ludicrous twists.

Channeling the cockiness of his version of Mark Zuckerberg in The Social Network, Jesse Eisenberg heads the cast as J. Daniel Atlas, a skilled street magician. After receiving a mysterious summons in the form of a tarot card, Daniel reports to a New York apartment, where he’s joined by Henley, his former assistant and the object of some unresolved feelings; mentalist and hypnotist Merritt McKinney (Woody Harrelson); and Jack Wilder (Dave Franco), who aspires to be like Daniel, but for now, settles for scamming tourists.

After their initial meeting, the film flashes forward a year. The group has collectively become famous (or at least famous for Las Vegas) as the ominously named Four Horsemen. Playing to arena audiences under the sponsorship of the mega-rich Arthur Tressler (Michael Caine), they wow crowds of tourists, then make national news by seemingly teleporting an audience member into a Paris bank vault, then showering its contents over the audience as professional magic debunker Thaddeus Bradley (Morgan Freeman) looks on admiringly.

The stunt also captures the attention of the FBI, which dispatches dogged, short-tempered agent Dylan Rhodes (Mark Ruffalo) to investigate, with some help from Alma Dray (Mélanie Laurent), an INTERPOL agent whose out-of-nowhere arrival and tendency to tote books about magic suggest she might be in on the con. Or she might be a red herring. Or first one, then the other. It’s that sort of movie. 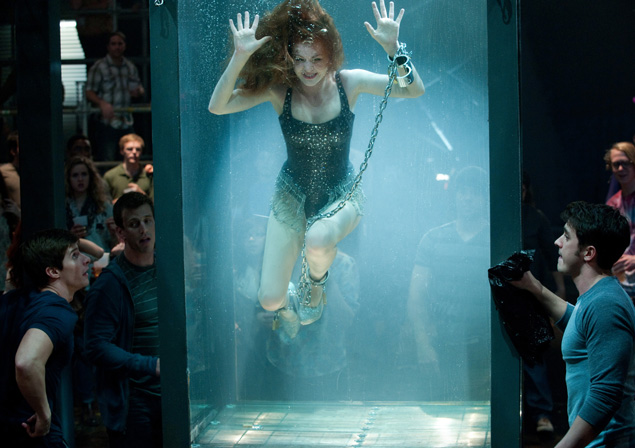 That would be fine if Now You See Me ever seemed to care about anything beyond keeping the guessing going as the action moves from Las Vegas to New Orleans to New York, and the gags grow ever more complex. It might even be fine as a depthless distraction, if the plot ever took root. Instead, Now You See Me plays like a series of aggressively charming performances glimpsed between vertiginous camera movements, elaborate setpieces, and baffling twists that will challenge even those unusually skilled at suspending disbelief, particularly in the galling final revelation. Audiences go to magic shows to get fooled, but that doesn’t mean they want to leave feeling cheated.