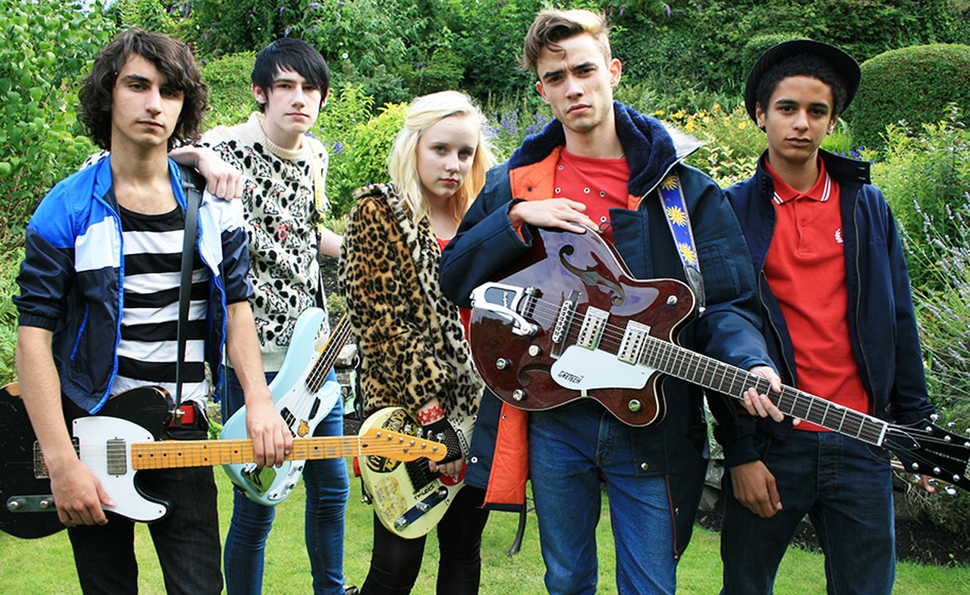 For all punk’s snotty, vulgar aspiration to rebelliousness and upsetting the status quo, it remains one of the most tradition-bound genres. The punk genre/mindset/worldview has stayed perpetually in thrall to the innovations of loud, angry young men in 1977 England, who in turn were inspired by the androgynous rebels in The Stooges, The Velvet Underground, and New York Dolls.

Every new derivation of pop-punk that has followed Sex Pistols, The Clash, and The Buzzcocks has been accused of recycling those groups’ riffs, three chords, and attitude, as if the entire history of popular music wasn’t one long case of theft and appropriation. New generations of punk rockers, or punk-derived rockers whose work loosely fell under the new-wave rubric, tend to sound an awful lot like previous generations.

Sure enough, when a group of telegenic kids calling themselves The Poppyfields released a pop-punk-leaning single called “45 RPM” in early 2004, it sounded an awful lot like the older, more new-wave-oriented band The Alarm, with good reason: It was The Alarm, under a different name. Frustrated by the music industry’s obsession with youth and image, and its unwillingness to give breaks to veteran acts, Alarm frontman Mike Peters decided to pass off his band’s work as the music of kids carrying on proudly in the three-chord, hard-and-fast, pop-punk tradition. The plan was to expose the music industry’s ageism. The stunt worked; The Poppyfields landed on the charts with its new-old single, and The Alarm was able to leverage the fake group’s popularity and stage a comeback under its own name.

Peters’ stunt forms the core of Vinyl, a fictionalized take on his ingenious prank that casts Quadrophrenia’s Phil Daniels as Peters’ surrogate Johnny Jones, a once-prominent musician reduced to trading weed for rent in the shabby trailer he shares with his long-suffering girlfriend. Johnny’s musical career has dead-ended, but he gets a renewed lease on life when he reunites with his old bandmates, who have all gone their own ways since splitting up decades earlier.

These now dissimilar men enjoy a drunken jam session following a funeral, and they’re shocked and delighted to discover that in their blackout haze, they wrote a song that would be a sure-fire hit, if it weren’t the product of middle-aged men rehashing their past glories. Johnny takes the demo to his former band’s old label, where he’s told they have no interest in musicians over age 30.

So he hatches a brilliant scheme: With the help of his former bandmates, he’ll create a fake band of gorgeous kids called The Single Shots who look the part of sneering, commercially viable, fundamentally non-threatening punk rockers. Then he’ll pass off his music as theirs. He hires a group of attractive posers to portray the band, but he cheats a little by hiring as the lead singer and frontman a young man nicknamed “Drainpipe” (Jamie Blackley) who can actually sing and play guitar, and isn’t just perfect cheekbones married to a meticulously cultivated rock ’n’ roll attitude. The Single Shots are fakes, but Drainpipe is the real deal, and before long, the puppets are rebelling against their masters in true punk-rock form.

Vinyl’s slyest jokes suggest that just by pretending to be rock stars, and by being cool, sexy, and hip, plus having great hair, these phonies can’t help but embody rock ’n’ roll’s carny spirit at least as much as the creaky old men who are actually writing the songs and playing the instruments. The charismatic Blackley steals the film from his elders, and in the early going, the film has a busy, blustery, infectious energy. But it begins to lose momentum once the focus shifts away from the hoax and onto a series of listless subplots pulling the film away from satire and into the realm of bloated family drama. As Vinyl progresses, it loses interest in every member of The Single Shots other than Drainpipe, and his screen time is largely swallowed up by a subplot involving his suspicion that Johnny Jones might be his real father. Paternity figures prominently in the least compelling elements of the film: Another go-nowhere subplot concerns Johnny’s girlfriend attempting to get pregnant.

Vinyl benefits from a wry, knowing take on the music industry and a central song that, like the titular ditty in That Thing You Do!, actually sounds like it could have been a hit, and doesn’t wears out its welcome no matter how often it’s played. Yet the film’s fizzy charm dissipates over the course of a leaden third act weighed down by plot contrivances. There’s nothing wrong with feel-good pop-punk bubblegum, but after a strong start, Vinyl loses its flavor.

A brief, unedifying making-of featurette and a picture gallery, trailer, and music video.