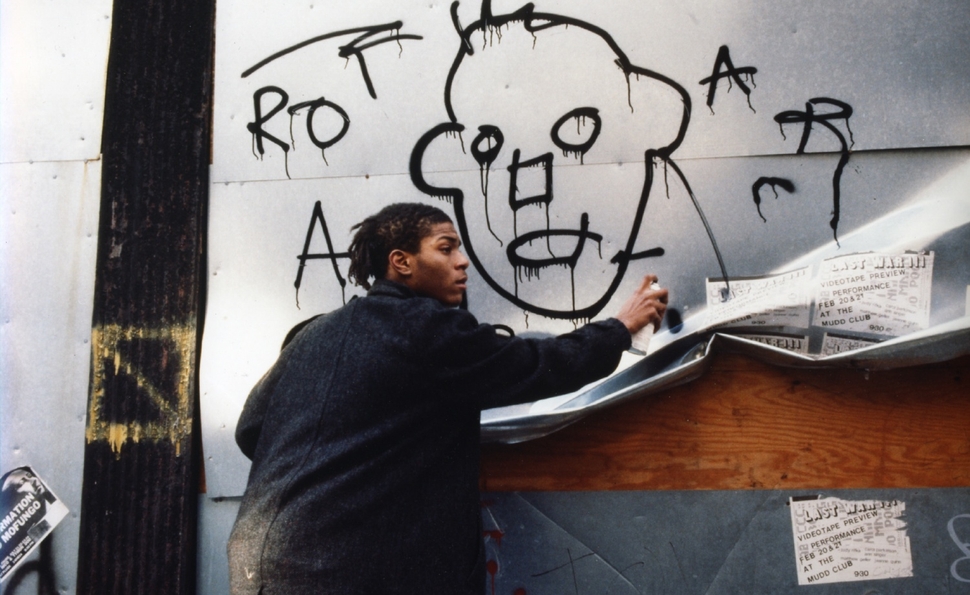 Given enough time, every film becomes a documentary. Even something like Star Wars, set a long time ago in a galaxy far, far away, now tells us a great deal about the 1970s, if only in terms of things like hairstyles and conceptions of futuristic technology. Consequently, movies that might have been largely uninteresting when they were made can become utterly fascinating decades later, in barely intended ways.

Downtown 81 is the rare film that seems to have had posterity in mind. Shot in the winter of 1980-81, under the working title New York Beat Movie, it stars then-unknown artist-musician Jean-Michel Basquiat, more or less playing himself, as a homeless painter who wanders the East Village vaguely looking for a woman named Beatrice (Anna Schroeder), who gives him a ride in her convertible at the beginning of the film, and expresses an interest in becoming some ill-defined combination of lover and patron. For financial reasons, the movie was abandoned in post-production; only in 2000, 12 years after Basquiat’s death (and four years after the release of Julian Schnabel’s biopic Basquiat), did its makers finally manage to assemble the surviving elements into something resembling a completed work. Even then, Slam star Saul Williams had to provide a great deal of voiceover narration that Basquiat never recorded, and virtually all the dialogue in the movie had to be looped—pretty poorly, in most cases.

It’s hard to guess how Downtown 81 might have been received back when it was made. Although Basquiat is effortlessly charismatic, he isn’t given much to do; the film leans heavily on narration, much of which crosses the line separating poetic from pretentious. (“I’m a writer. But sometimes I feel like I was written. ‘You see that guy?’ they say. ‘He’s a real character.’ But maybe I wrote myself. That’s life, right? Write, rewrite.”) Nor is there much of a story, really. After being evicted from his apartment, Basquiat (who was reportedly actually homeless during the shoot, sleeping every night in the film’s production office) tries to sell one of his paintings, and he occasionally asks around about Beatrice, but that’s about it. Mostly, he just walks around downtown New York, saying hi to various friends and watching the ones who are in bands either rehearse or perform. Even the goofy fairy-tale ending, featuring a cameo by Debbie Harry (then at the height of her fame as Blondie’s lead singer), comes out of nowhere, as the film had previously been almost aggressively mundane and down-to-earth.

Three decades later, however, Downtown 81’s aimlessness has become its saving grace. Ordinary 16mm footage of Basquiat strolling through the East Village—and there’s a lot of that, as if director Edo Bertoglio were actively striving to document the neighborhood—preserves a unique urban landscape that no longer exists and was rarely filmed. (Unlike, say, Times Square, which has also radically changed, but shows up in many more old movies.) What’s more, the film virtually qualifies as a musical; it stops in its tracks every few minutes to showcase such seminal No Wave bands as DNA, Plastics, and James White And The Blacks (plus Kid Creole And The Coconuts, an act far too sui generis to be labeled). Thankfully, the audio for all of these performances, recorded on superior equipment, remained intact, allowing Downtown 81 to function as a terrific primer on New York’s underground music scene as it existed at that particular moment. (The soundtrack even features a couple of songs by Vincent Gallo, who hadn’t yet started acting.) While that was clearly the intention, to some degree, it’s unlikely that anyone involved realized just how invaluable this footage would one day seem. Whatever they would have wound up calling the film back then, the title Downtown 81 aptly represents the historical curiosity that it’s become.