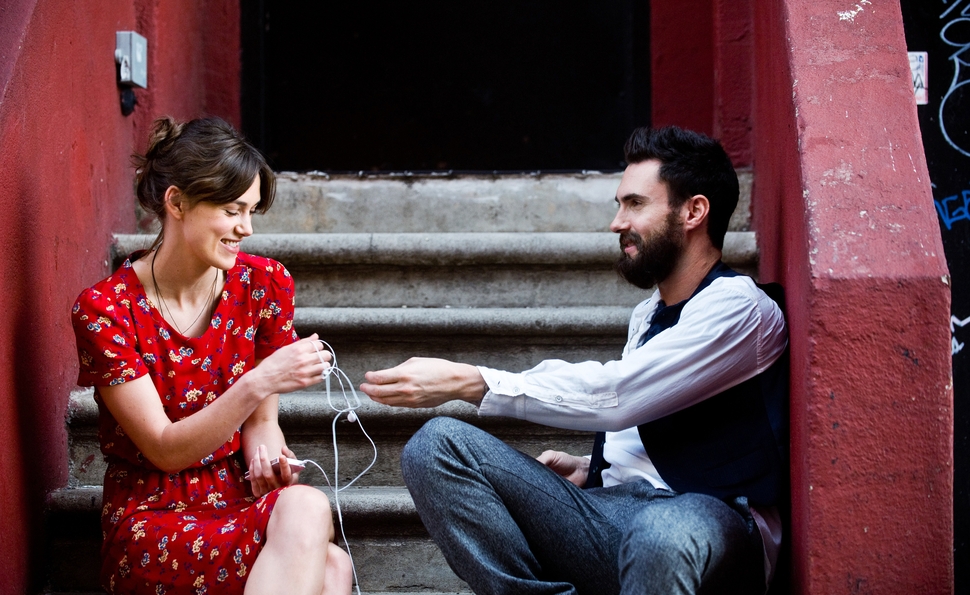 John Carney’s Begin Again makes being a musician seem like the most fun imaginable. In the film’s view, the music industry is a soul-destroying, life-ruining hell—but that’s because it has nothing to do with actually creating music, a fun hobby that’s all about celebration, creativity, and camaraderie. For that matter, the industry has nothing to do with listening to music, which drops the barriers between people and lets them bond. In Carney’s story, the music industry destroys relationships, in the most literal ways possible, but music itself heals relationships, just as literally. It’s as though music is a magical panacea, suitable for improving any situation. The film’s original title was the not-entirely-rhetorical question Can A Song Save Your Life? Carney makes it clear that in his opinion, yes, it can. But his strident message tends to get in his way.

The film centers on a particularly awful day in New York City for two people: disgraced record-label founder Dan (Mark Ruffalo) and British singer-songwriter-guitarist Greta (Keira Knightley), who meet when Greta’s selfless buddy Steve (James Corden) hauls her onstage at a bar to sing one of her original songs. Greta’s acoustic-guitar ballad song is simple and thready, but Ruffalo, drunkenly slumped in the audience, watches as drumsticks and bows magically rise to the instruments behind her and start playing the song as he would produce it in a studio. It’s a mighty twee scene, with clunky effects worthy of a 1960s Disney movie, but it’s evocative at the same time. She has the musical talent he’s been looking for; he has the vision to fully realize it. And no one else can see or hear what they’re experiencing.

That idea of music as an inner, hidden world made joyously manifest and tangible extends throughout Begin Again, as Greta and Dan fence with each other, the story loops back to show how they both ended up in despair in that bar, and they start making beautiful music together—or sometimes just experiencing it together, via a night spent running from one iconic locale to another while listening to favorite classic songs on a shared mp3 player. (Music is the film’s first and best love, but its second love is New York City, which Carney shoots as a blur of bright lights and happy young night-lifers.) Carney makes this sequence so swooningly intimate and romantic that it seems likely to inspire thousands of young couples to try the same trick—especially when Dan confesses that a similar night of music let him woo his former wife with barely a word passing between them. But to the film’s credit, it never tries to sell the 46-year-old Ruffalo and the 29-year-old Knightley as a romantic couple. They both have other considerations—Greta’s long, passionate relationship with fellow musician Dave (played by Maroon 5’s Adam Levine) ended almost the second he became famous, while Dan’s heart apparently still lives with his ex-wife Miriam (Catherine Keener) and estranged teenage daughter Violet (Hailee Steinfeld). How will these damaged relationships and broken hearts be made whole again? One guess.

Carney’s breakthrough Once, starring Glen Hansard and Markéta Irglová as star-crossed never-quite-lovers, was about expressing love through music when it was inappropriate to express it through words. Begin Again is instead about love of music, particularly in its purest form, free of transactions and professional polish. The message gets oversold as Greta sneers down Dan’s music-industry contacts, and airily hand-waves away the idea that she should give his former partner Saul (Mos Def) a demo. She doesn’t have a demo, she says. She doesn’t record her music, she just writes songs for her own pleasure. And, in one of the movie’s sweetest scenes, to give one to Dave as the one gift she can afford. And, in one of the movie’s saddest scenes, to express her feelings to him in a particularly personal version of the 3 a.m. drunken post-breakup call. Music expresses everything from joy to grief in this film, particularly when nothing else fits the bill. But speaking of bills, Begin Again is awfully coy about how Greta pays hers. In her idealism, she keeps pointing out that she has no interest in being famous, or selling her songs, much less punching them up into pre-packaged hits. She also doesn’t have a job, and the movie completely ignores the question of what she does for money. That alone makes it seem like a wish-fulfillment fantasy, as giddy and satisfying and fake as a comic-book action-hero film.

At least the music is there to help bridge the gap between the narrative’s charming idealism and its choking preciousness. Knightley is a sweet-voiced but unremarkable singer, and the songs—largely written by Carney, Nick Lashley, Nick Southwood, and New Radicals’ Gregg Alexander and Danielle Brisebois, with Hansard on one song and Corden writing his own tunes—are harmlessly poppy and winning, but without the intensity or feeling of Once’s music. Heard on an album, they’d be pleasant but unmemorable; what sells them is the actors’ compelling, visible pleasure as the characters create music together, and Carney’s swooping direction, which uses fast cuts and music-video motion to suggest the live-wire energy and connection they all feel when they’re allowed to fully express their craft.

There’s still a feeling that the film is trying too hard. The splitter that Dan and Greta use to share their music as they run through the city becomes a major symbol of a shared love of art, but it just as clearly represents how Dan is straddling two worlds, the idealistic and the commercial, and how it’s tearing him in two. For that matter, the splitter could just as well be a symbol for the movie’s divide between authenticity—a virtue it touts over and over—and the stylized, glossy, tempting but hard-to-buy fantasy it represents in execution. Begin Again is all about the untrammeled joys of music, but like a hit pop song, it works better in the emotions than it does through any close examination. Audiences will be happiest if they can entirely turn off their brains and just sway to the beat.