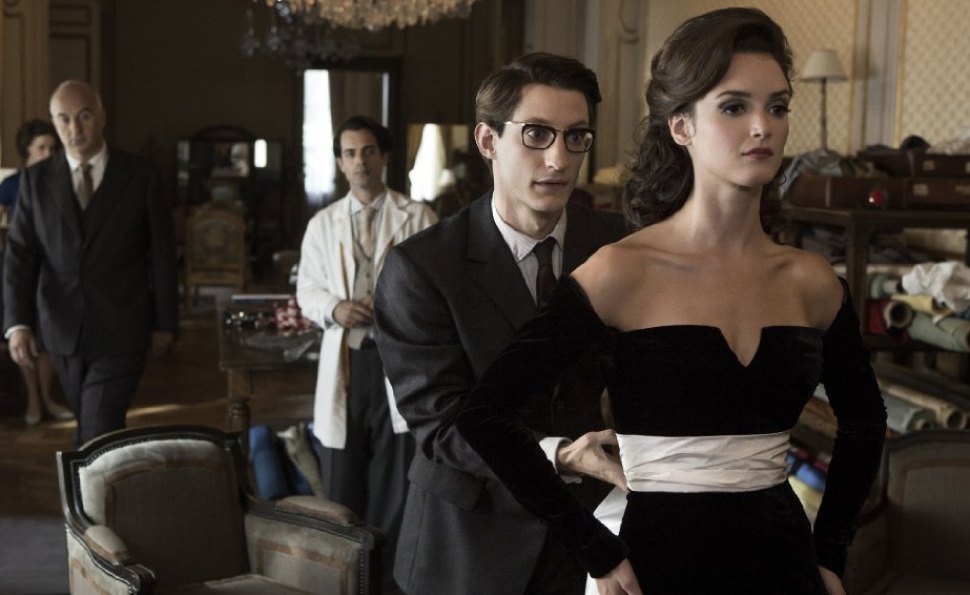 Yves Saint Laurent’s perplexing framing structure has Guillaume Gallienne’s Pierre Bergé reflecting back on his life as the business partner and soulmate of fashion icon Yves Saint Laurent, while he oversees the auction of the massive, lucrative art collection that symbolizes their life together. Bergé’s voiceover thoughts take the form of posthumous letters to his dead partner in which he rehashes the greatest hits of Laurent’s life, seemingly more for the benefit of an unseen audience than for Laurent himself, who presumably wouldn’t need to reminded of his own travails, unless he suffers from some manner of ghost amnesia.

The action then unfolds in flashback, opening with tall, rail-thin, beak-nosed Laurent (Pierre Niney) assuming a position of enormous power at fashion powerhouse Christian Dior at the tender age of 21. Laurent begins the film as close to a doe-like innocent as anyone could be in the decadent, sex-saturated world of high fashion. True, he does seem to enjoy a lusty sex life with both men and women, whom he seemed to see as muses as much as lovers, but he’s a teetotaler who conducts his personal life with a caution he abandons as the years go on.

Then Laurent meets and falls in love with older art dealer Bergé. His career explodes, and the two embark on an epic love affair that spans the decades and survives an endless series of challenges, from nervous breakdowns to serial infidelity, drug abuse, and alcoholism. Laurent begins the film as the product of a highly particular time and place, as a beautiful, gifted child faced with inhuman pressure. He shatters under the stress, but he’s reborn as one of fashion’s boldest and most important voices.

But Laurent and the film grow depressingly and predictably fuzzier and more generic with time, as the one-time teetotaler begins stumbling blearily through the years, an alcoholic beverage perpetually in his hand, his eyes red and bleary as he searches for the next screw or line of blow. Laurent and Bergé move to Marrakesh and Laurent’s baby face grows scruffy and scraggly as he throws himself into the pampered, omnisexual life of a rich hippie sensation-freak.

Laurent and Bergé hurt each other accidentally and deliberately. Bergé spitefully has sex with a model Laurent is obsessed with. Laurent cheats on Bergé with a broad swath of French society, including the hunky lover of Laurent’s business rival, Karl Lagerfeld. But these dissimilar but strangely complementary men nevertheless managed to make their relationship work, though it’s unclear whether that was a testament to their codependency, or to a deep, abiding love. In a better, more nuanced film, that might register as pleasing ambiguity. Here, it just seems like a symptom of the film’s inability to convey who its subject was as a person, beyond someone who loved to do cocaine, swill champagne, and have sex with beautiful people.

In Yves Saint Laurent, the title character embodies the clichés of the time—or rather, he embodies the cliches of period movies. Yves Saint Laurent accordingly feels stitched together from bits and pieces of superior films that fetishized the fashions, music, and counterculture of the sweaty, bell-bottomed past, particularly Boogie Nights. The film’s commitment to excess becomes excessive, and Laurent becomes a type, the brilliant artist who turns to drug, booze, and indiscriminate sexual adventuring to cope with being a world-famous celebrity. The bad behavior become predictable and dull, as Laurent’s true talents recede deeper and deeper into the background and the film stops being about a visionary but troubled designer, and becomes just another overwrought cautionary tale about the hazards of fame.

Yves Saint Laurent is the kind of heavy-handed, substance-light, spectacle-driven period film where the set decorator and the costume designer don’t just have the most important jobs on the film, they have the only important jobs. Even the actors playing the women and men Laurent dressed, had sex with, or both, seem more like scenery than important players with stories of their own. Yves Saint Laurent is consequently a film of empty beauty that seldom even attempts to delve beyond the pretty surface.