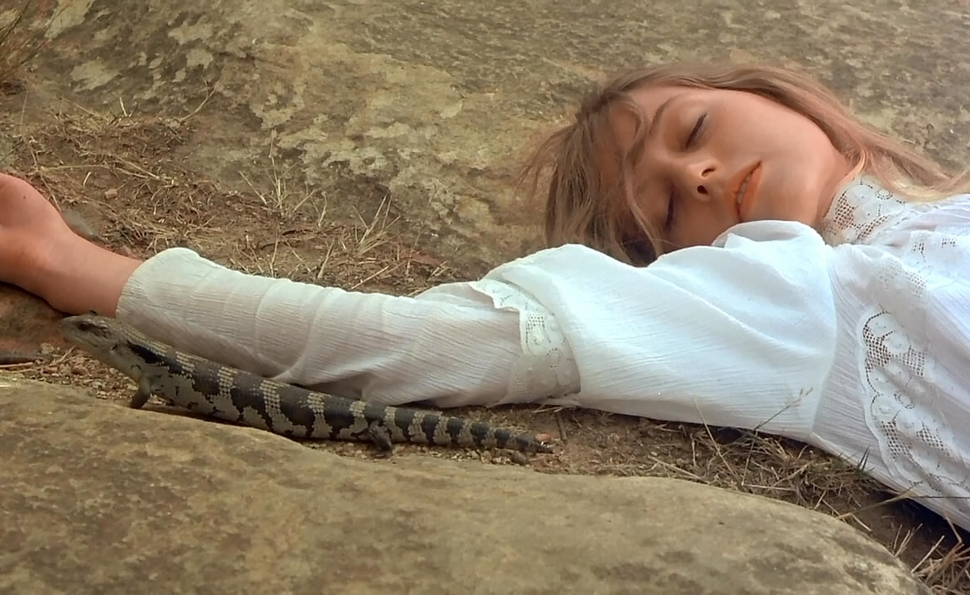 In a 2003 interview included on the new edition of Peter Weir’s Picnic At Hanging Rock, Weir recalls his first meeting with Joan Lindsay, author of the novel on which the film is based. “The conversation was urbane and wide-reaching about art and painting,” Weir says. Then, “After lunch over coffee, I asked the question I’d been told not to ask. […] I’d been prepped by the publisher who said, ‘Don’t ask Lady Lindsay whether the story is true or not.’” Her polite response: “Young man, I hope that you do not ask me the question again.”

Speculation has abounded about the possible real-life inspiration for Picnic At Hanging Rock since the publication of Lindsay’s novel in 1967, and especially since the release of Weir’s film in 1975, when it became a breakthrough for Weir and a sign that the rest of the world should pay attention to Australian filmmaking. Set in 1900 at a girls’ boarding school in a remote corner of the Australian state of Victoria, Picnic portrays an eventful Valentine’s Day outing to the natural wonder of Hanging Rock, then the outing’s aftermath among those left to ponder what happened. In a sense, asking whether the incident really happened is the wrong question, because it’s the work itself that matters. But in another sense, there are no wrong questions when it comes to the film, so long as those doing the asking don’t expect answers.

Picnic At Hanging Rock is determined to keep its secrets to itself. Yet it’s as beguiling as films come. It opens in the gauzy languor of the schoolgirls’ morning routine—which Weir shoots with lacy, barely sublimated eroticism—and closes with a development that suggests its mysteries go even deeper than the central disappearance of the three schoolgirls and one teacher who never make it back from Hanging Rock. All the while, it keeps offering what look like clues. Why does one of the disappeared, Miranda (Anne Lambert), a girl whose beauty has a mesmerizing effect on everyone she meets, invest her farewell to Sara (Margaret Nelson), a schoolmate nursing an obvious crush on her, with such finality? Did the widowed headmistress Mrs. Appleyard (Rachel Roberts), frequently posed in front of portraits of Queen Victoria, start to come unraveled even before the incident? And what to make of Irma (Karen Robson), who’s found a few days later, missing both her corset (a detail spoken of in whispers) and any memory of what happened?

Yet the details don’t add up to a solution, so much as they suggest an overabundance of possibilities in an environment filled with undercurrents that suggest even more. Weir makes the images of the girls, clad head-to-toe in modest white garments, look both edenic and alien. A soundtrack filled with ominous rumbling and a pan-flute piece from Zamfir (before he descended into cable-friendly cheese) suggests they’ve stumbled into an older world unsuited for their refined Victorian manners. So does the way Weir shoots the rocks, which loom over those at the base. When the party destined to disappear climbs higher and looks down, those left behind appear tiny and powerless. Aboriginal people are conspicuous in their absence, but the nearby town seems half-finished at best, as if a change in the wind could blow it away. Maybe this place wasn’t meant for outsiders.

Weir builds atmosphere one detail and lingering shot at a time. The cluttered, shadowy interiors of the school contrast with the open spaces and welcoming light of Hanging Rock, but the film makes neither feel like a safe place. Every moment feels designed to be unsettling, but the film also creates a sense of inevitability, that whatever is happening can’t be avoided, and should perhaps be embraced. “Everything begins and ends at exactly the right time,” Miranda says, delivering the observation as if making casual conversation. Elsewhere, Irma describes Hanging Rock as “waiting a million years, just for us.” Maybe she’s right. She never can express why it waits, but that makes her no different from anyone else.

There’s more at work, too. Supporting characters introduce the wrinkles of class and national identity, complicating the seldom-spoken-of but never-distant issue of sex. And as the mystery deepens, a kind of muted hysteria sets in, a demand for answers that erupts late in the the film, in one of Picnic’s most famous scenes. The outburst reveals nothing, but it does confirm a pattern. Hanging Rock is, after all, “lava forced up from deep down below,” according to Miss McCraw (Vivean Gray), the teacher who disappears with her students. In the fullness of time, what’s underground gets brought up to the surface for all to see, and wonder at, and puzzle over.

Criterion issued a Picnic At Hanging Rock DVD that lacked any special features beyond a trailer. The new edition corrects that via that interview with Weir, plus a new documentary, also filled with interviews from 2003. Both are strong, revealing behind-the-scenes details without spoiling the film’s mystery. (If anything, they make Lindsay seem even more enigmatic.) David Thomson’s introduction for the film is insightful, as is Megan Abbott’s essay in the accompanying booklet. A 1975 making-of is mostly interesting for historical value, but Weir fans will appreciate the inclusion of Homesdale, a short experimental feature from 1971 shot at the director’s house, which inspired Picnic At Hanging Rock’s producers to reach out to him. It isn’t entirely successful, but its casual inclusion of surreal touches and eerier moments anticipates Hanging Rock, and there’s shades of The Truman Show in its final twist. Also included: a paperback copy of Lindsay’s novel, for those wanting to go back to the source.