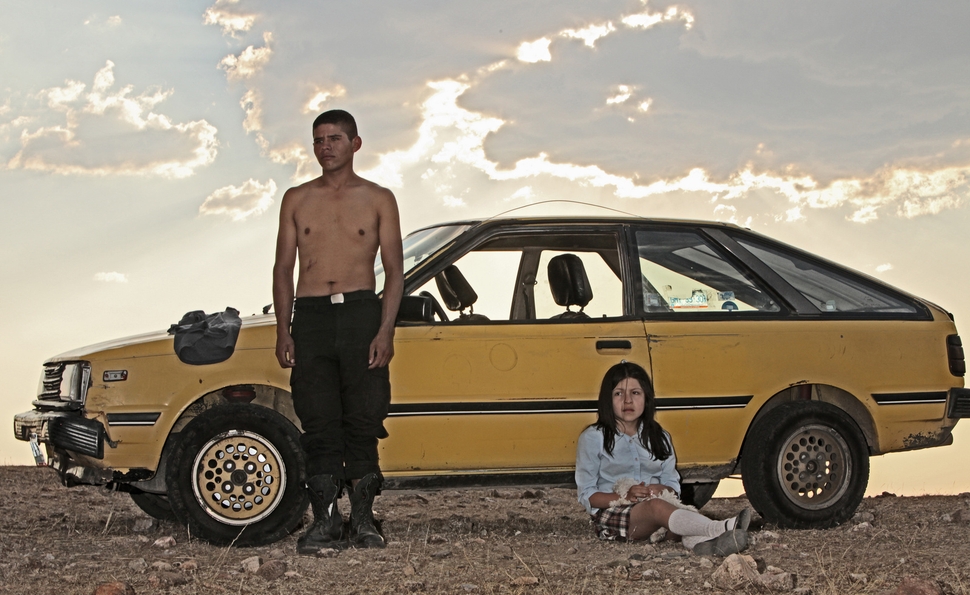 When Heli, Amat Escalante’s grueling look at Mexico’s drug war, premièred at the 2013 Cannes Film Festival, all anybody could talk about afterward was the genital-burning scene. It occurs about an hour into the film, when two hapless young men—one of whom has idiotically stolen a sizable amount of cocaine—are picked up by cartel members and brought to a nondescript house: bare lightbulb on the ceiling, bare mattress on the floor, bare crumbling walls. The bad guys hang the thief up by his wrists and proceed to beat him with a large, flat paddle, which surely isn’t fun for the victim, but seems like just a slightly more vicious version of what befalls the incoming freshmen in Dazed And Confused. Could be much worse. Then it suddenly gets much worse, as a cartel enforcer pulls down the victim’s pants and underwear, squirts some liquor onto his bare crotch, and sets his junk aflame. Escalante captures this casual depravity in a single, uninflected medium shot, with nothing hidden or obscured; it must have been simulated somehow (presumably with a flame-retardant coating), but it certainly doesn’t look simulated. It’s hard to watch.

The problem with Heli is that “hard to watch” is its sole characteristic. The rest of the movie isn’t as graphically awful as its centerpiece torture sequence, but it does little more than flatly illustrate the obvious—namely, that the drug war is very bad news for ordinary, well-meaning Mexicans. Heli (Armando Espitia), a teenage auto worker supporting a wife (Linda González), a pre-teen sister (Andrea Vergara), and an infant son, has no connection whatsoever to the criminal world, but gets inadvertently roped in when his sister’s boyfriend, Beto (Juan Eduardo Palacios), an army cadet, steals two bricks of cocaine from a bust and temporarily hides them in Heli’s water tank. When Heli finds them there after investigating the resulting water stoppage, he immediately gets rid of them, as far from the house as he can, but it’s already too late. In addition to penis flambé, the resulting fallout—involving corrupt police officers as well as the cartels—includes a body hung from a freeway overpass, a cute little dog getting its neck snapped, and the abduction and repeated rape of Heli’s sister. As a small favor, the rape occurs offscreen.

Escalante began his career as an assistant to Carlos Reygadas (director of Silent Light and Post Tenebras Lux), but his sensibility is dramatically different, with an emphasis on harsh reality unleavened by ethereal beauty. His previous film, 2008’s Los Bastardos, postpones its horror show until near the end, in a way that feels like bait-and-switch. Heli, for better or worse, is more straightforward about its pervasive sense of despair. Formally, it’s an impeccable piece of work, exacting and elegant; Escalante takes superb advantage of his semi-rural locations, and uses the camera to circumscribe his characters’ actions, underlining their futility. All the film ultimately has to say, however, is that horrible things happen in this world (especially in Mexico) and that’s there’s precious little anyone can do about it. Gerardo Naranjo’s terrific Miss Bala, which played at Cannes two years earlier, uses the drug war to make a strong, unexpected feminist statement, placing a beauty-pageant contestant at the center of the carnage, to bleakly absurdist effect. Heli doesn’t aspire to anything so radical, or even to anything interesting. It merely provides a few affectless citizens, who have their already-meager lives ruined by pointless, systemic savagery. It insists they can only hope to survive with a shred of self-respect, and maybe (but only maybe) with their genitalia intact.