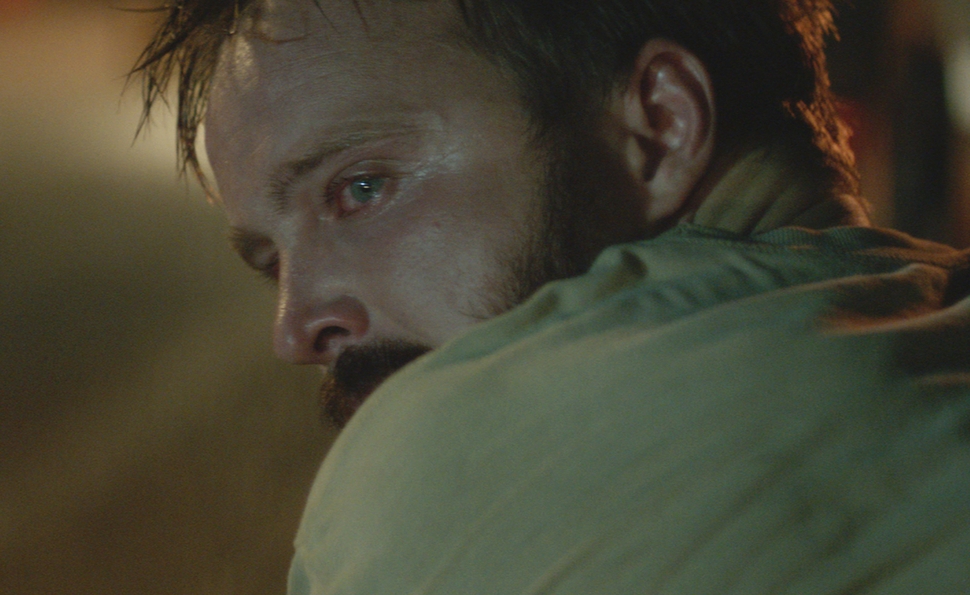 At the start of Kat Candler’s Hellion, an angry Texas teen named Jacob Wilson (played by Josh Wiggins) is busted for vandalizing property, and is sentenced to a kind of “Scared Straight” boot camp, held in a facility adjacent to a juvenile detention center. When Jacob smirks while being hollered at by the program’s big boss, he’s reminded that he’s lucky to be able to go back to his home every night, unlike the kids on the other side of the fence. This is where Jacob is in his life: at a place where he can either turn everything around, or keep sliding into oblivion. And the same is true for his immediate family. Jacob’s father Hollis (Aaron Paul) has been depressed since Jacob’s mother died, and is halfheartedly trying to pull himself out of a drunken tailspin while restoring a beach house in Galveston. Jacob’s younger brother Wes (Deke Garner) has been following in Jacob’s footsteps by setting fires in a junkyard, and as a result, the state has removed him from Hollis’ care and sent him to live with his Aunt Pam (Juliette Lewis). Times are tough for the Wilson boys. But they could still get worse.

Hellion is Candler’s third feature, and is an expanded remake of one of her earlier short films. Like much of Candler’s work to date (shorts included), Hellion is about a working-class Southern family that’s been knocked askew by personal tragedy and generational conflict. The movie’s producers include Take Shelter/Mud writer-director Jeff Nichols and Nichols’ own frequent producer Sarah Green; Hellion has some of the texture of Nichols’ films. Cinematographer Brett Pawlak captures the light of Southeastern Texas, where kids ride their bikes around quiet suburbs and dirt tracks by day, then gather around street lamps by night, as far from parental supervision as possible. And Candler has a remarkable feel for how teenage boys talk to each other, with an incessant stream of profanity, put-downs, unsupportable sexual boasts, and default defiance. (Ask one of the kids in Hellion for a favor, and he’ll likely snarl, “Do it yourself,” even to his best friend.)

But like Jacob, Hellion lingers for most of its running time in a betwixt-and-between place, never becoming either the sublime character sketch or the overripe melodrama it alternately promises to be. Sometimes, Hellion is overly plotty, dwelling on the arguments between Hollis and Pam, and the resentment Jacob has toward his dad, all while returning periodically to a storyline that sees Jacob trying to rally his family by winning a big motocross race. And sometimes Hellion is all about scene-setting: watching Jacob and Wes scarf down whipped-cream-and-sugar sandwiches, then go hang out with their obnoxious friends.

Hellion is much better when it leans toward the atmospheric, leaving the story behind. Wiggins is astonishingly assured for a young actor, carrying some of the rough sensitivity Leonardo DiCaprio and Brad Pitt had when they were kids onscreen. Hellion works well when Candler sticks close to Jacob’s psychology and his environs’ sociology: showing the look of warped pride on Jacob’s face when he watches Wes start a fire, or observing how Hollis’ own circle of friends are just as much of a bad influence as Jacob’s, and how adults and kids alike get so caught up in their own macho momentum that they forget they have to live in the world and take other people’s feelings into account.

It’s clear throughout Hellion that Hollis and Jacob know what they need to do to keep their family together, and Candler deserves credit for making a movie that acknowledges how tough it is for some people to make that long, laborious journey to get where they want to go. But Hellion also hesitates and backslides, letting sensationalistic scenes like the one where Hollis’ friends teach Jacob how to hold a gun (while grunting, “Gotta make a man out of him”) take the place of scenes where the scenario could deepen or progress. If there’s a Scared Straight for indie dramas, Hellion could stand to go there.