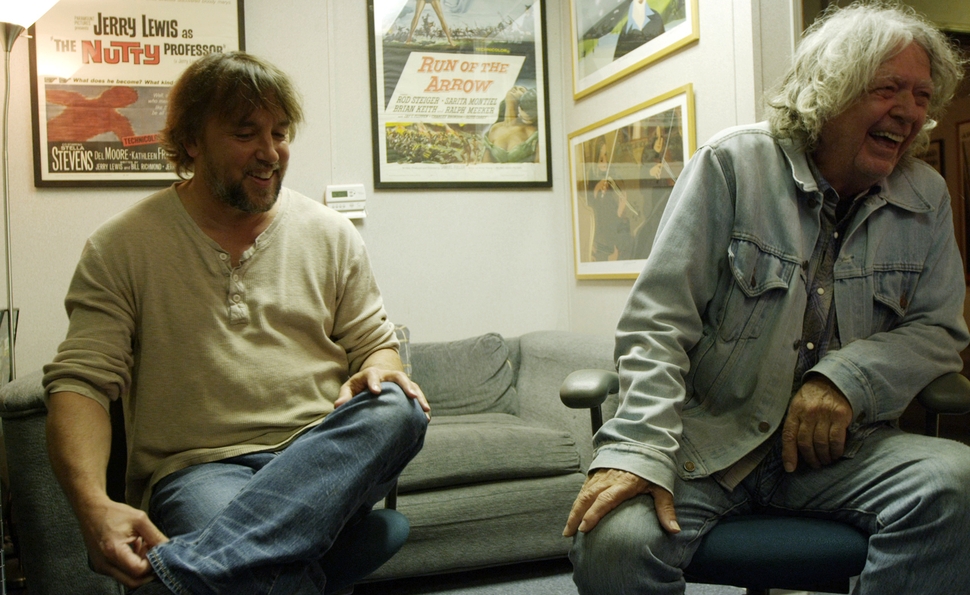 Double Play: James Benning And Richard Linklater plays like an art-damaged version of an episode of Iconoclasts, the Sundance Channel series that pairs two visionaries, then follows them around as they discuss life, art, and their creative philosophies. Gabe Klinger, a writer, professor, and first-time director who made this documentary with a financial assist from Kickstarter, does essentially the same thing in Double Play, bringing a fly-on-the-wall style to several conversations between these two longtime friends and non-traditionalist filmmakers. For serious students of cinema, listening to Linklater and Benning trade thoughts about narrative language and the sculpting of motion-picture time will be a pure pleasure. But more casual viewers—the kind who subconsciously relish the three-act Hollywood movie structure that, at one point, Linklater says he has “always felt oppressed by”—may find the experience too esoteric and nebulous to fully embrace.

Double Play doesn’t just lack conventional structure, it actively rejects it. Shot at various locations in and around Austin, Texas—including the Austin Studios lot and Mount Bonnell, site of the final scene in Linklater’s Slacker—the movie meanders, much like its subjects’ conversations and many of their films. Klinger tries to capture the spirit of experimentation that infuses both men’s work, not only by recording what they say and inserting clips from their films, but also by mimicking their approach to form. He holds the camera on distant shots of the chatting Linklater and Benning for extended periods of time, and stays focused for longer than some directors might on a scene of Benning capturing the sound and sight of a tranquil lake, as he did in 13 Lakes, his 2004 ode to the stillness of nature. At one point, Benning talks about the importance of “letting duration play out meaning”; Klinger’s approach to Double Play really takes that concept to heart.

What’s missing, however, is context. Klinger drops the audience into the interactions between Linklater and Benning, assuming that snippets from their movies and other conversational cues will fill in any knowledge gaps regarding their filmographies or the cultural relevancy of their contributions. While it’s probably true that the viewers most likely to watch this documentary will already be informed on both fronts, Double Play would benefit from more of an informational foundation, especially since one of the unspoken, hoped-for effects of this film is surely to introduce more people to the stories previously told by both directors.

In Double Play, Klinger emphasizes the similarities between these two auteurs, zeroing in on their shared love of baseball, as manifested in films by both Linklater (Dazed And Confused) and Benning (American Dreams: Lost And Found); their minimalist approach; their comfort with letting scenes unfold with the authentic slowness of real time; and their still-active commitment to indie ideals, many years into their multi-decade careers. What isn’t addressed are their differences. Even though both clearly exist on a similar, unconventional-filmmaking plane, only one of them has carved out a career that qualifies as high-profile within the mainstream. The icon of DIY filmmaking, Linklater has managed to stay true to his own sensibility while producing both experimental fare and comedies that are unquestionably mainstream; this is the guy, after all, who made Waking Life and Boyhood, but also brought us School Of Rock and a remake of The Bad News Bears. How has he been able to hopscotch between those two worlds with such ease? And why is Benning still a relatively lesser-known figure: Is that by choice, or because his films are too admirably, stubbornly challenging for a wider public to embrace?

Double Play never raises nor answers those questions. It’s a perfectly pleasant cinema-studies seminar, but one that stops just short of teaching its students anything truly insightful.