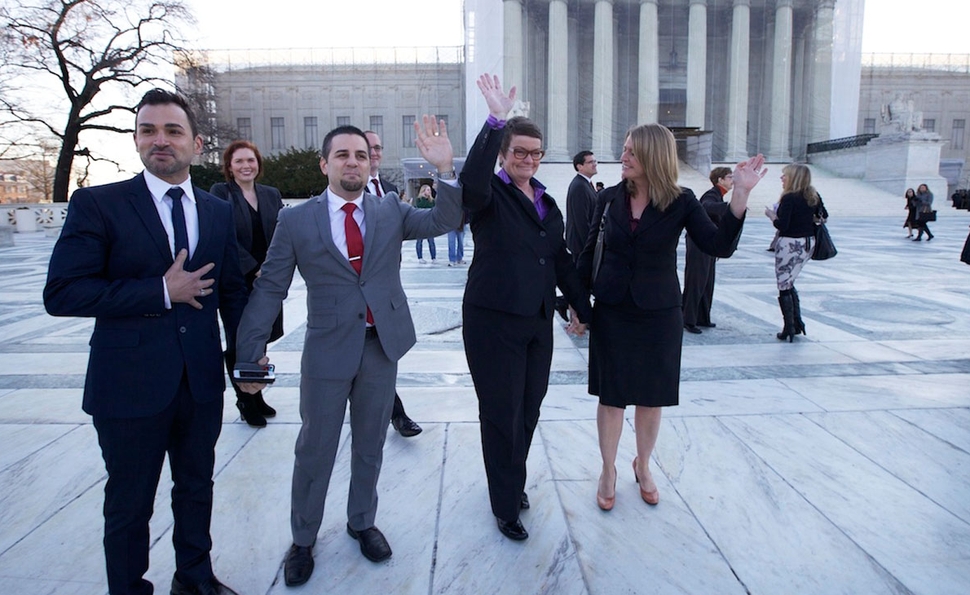 The slow grind of the U.S. legal system isn’t a particularly cinematic spectacle, which is why decades of narrative features and television shows have goosed dry legal proceedings with over-the-top oratory and shocking last-minute reversals. That’s a much harder trick to pull in the fact-based realm of documentaries, particularly those focused on complex, systemic legal issues like civil rights, rather than sensationalistic or personality-driven cases (i.e. West Of Memphis, Whitey, etc.). But while it’s firmly centered in the dull paperwork-and-boardrooms reality of actual legal procedure, The Case Against 8 has advantages more powerful than a dozen dramatic “Perry Mason moments”—though it has one of those as well—namely behind-the-scenes access to one of the most historic, influential cases in recent history as it’s happening, along with an immensely likable cast of characters serving as a conduit to the emotional heart of that case.

Ben Cotner and Ryan White’s stirring documentary (presented by HBO, which will air the film beginning June 23, following a short theatrical release) traces the nearly five-year journey between the passage of California’s Proposition 8 in November 2008 and the implementation of its legal reversal in June 2013, when same-sex couples were once again extended the right to marry in that state. The dominos have fallen quickly since the U.S. Supreme Court struck down the final appeal on Prop 8 (along with the Defense Of Marriage Act, which was overturned the same day), with one state after another legalizing gay marriage or overturning bans against it, and public opinion on marriage equality shifting dramatically in favor of gay couples’ rights. Though the battle continues in other states across the country, The Case Against 8 captures that paradigm shift as it happens. Cotner and White’s cameras are there almost from the jump, as the legal team and plaintiffs in what would become Perry v. Schwarzenegger (and later, in appeals, Perry v. Brown and Hollingsworth v. Perry) assemble in the wake of Prop 8’s passing, intent on healing the devastating blow it struck to gay couples.

Two such couples, Berkeley’s Kris Perry and Sandy Stier (who have four sons together) and Los Angeles’ Paul Katami and Jeff Zarrillo, are selected as the plaintiffs in the case against Prop 8, following a long vetting process that ensures they are, in the words of one lawyer, “absolutely safe choices.” And they are: The four plaintiffs, through talking-head interviews, recitations of their own in-court testimonies, and candid footage at home and in various legal offices, emerge as the uncomplicated heroes of marriage equality. They carry the majority of The Case Against 8’s emotional load, in their stories of how their rights as couples have been compromised (Perry and Stier’s 2004 marriage in front of their friends and family was unceremoniously nullified via form letter), and in the bravery and vulnerability required of them to be the collective face of such a controversial, personal issue; a sequence of threatening voicemail recordings calling them “stinkin’ dykes” and wishing for their death by AIDS is devastating. They are the polished yet sincere heroes of the Prop 8 story, but another, much odder couple emerges as The Case Against 8’s real stars.

Attorneys David Boies and Ted Olson famously squared off in 2000’s Bush v. Gore, and perhaps even more famously teamed up, this time as bipartisan allies, to take down Prop 8, in a move everyone in the film acknowledges as the genius bit of calculation it is. (It was masterminded in part by Rob Reiner, who helped finance the case, and occasionally pops up around the edges of the doc.) The conservative Olson’s selection as co-council was controversial among LGBT activists, but ultimately proved a huge boon to the case against 8, and to The Case Against 8. Olson is a shrewd but warm presence throughout the film, explaining his positions thoughtfully and simply (“Marriage is a conservative value,” is how he explains his decision to take on the case) and injecting a good bit of humor in his frank assessments. He and Boies repeatedly acknowledge their mutual respect and admiration for each other, and their partnership helps give The Case Against 8 its “us against the world” verve.

But it becomes apparent as the film goes on that this isn’t exactly the case; the marriage-equality team is obviously well-funded, well-staffed, and well-documented from the word “go,” slowly but efficiently steamrolling its increasingly desperate competition. The Case Against 8 is one-sided by design—its bias is right there in the title—and shows little interest in looking behind the other curtain in this case; when the other side is acknowledged, it’s usually via footage of loudmouthed protesters outside courthouses, or deposition video of inept opposition testimony. That would be a problem if The Case Against 8 were interested in exploring the principles behind the case, but it’s much more interested in the people behind it, specifically the ones who stand to be most affected by its outcome. The matter of harm proves integral to Perry v. Schwarzenegger, when it’s acknowledged that the proponents of Prop 8 have no good answer to the question “Who would be harmed by marriage equality?” while the potential for harm toward gay couples is self-evident.

With its action taking place primarily in the beige-walled, wood-accented environs of legal offices and courthouses, The Case Against 8 compensates for its visual blandness with good old-fashioned storytelling (and an occasionally obtrusive, blatantly heartstring-pulling score). Its storytellers are polished, professional, and well-practiced in their arguments from five years of making them in courtrooms and press conferences, but that doesn’t minimize their effectiveness—particularly because viewers get a firsthand view of how that polish was attained. Seeing the four plaintiffs endure emotionally draining mock-trial cross-examinations and day-of trial jitters, contrasted with the cool, almost blasé professionalism of their legal team, galvanizes the fact that the story of marriage equality is a personal one writ large, a society-wide shift based in love between two individuals. The Case Against 8 effectively, memorably connects the dots between national and personal history, and between individual action and large-scale change.