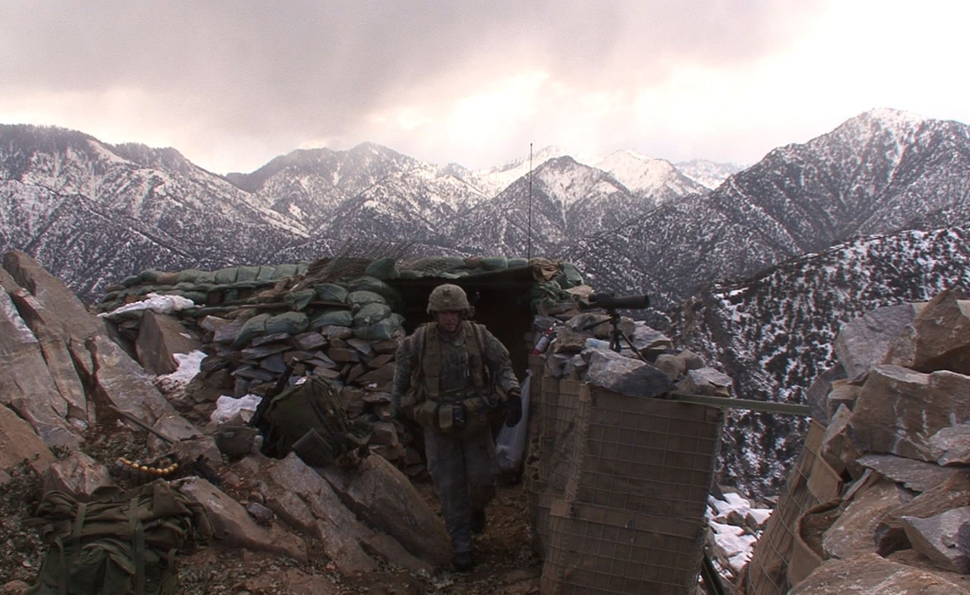 Documentaries seldom receive sequels. When they do, the second film is naturally, if often mistakenly, perceived as an admission of inadequacy on the part of the first. Michael Apted’s seminal Up series demands another installment every seven years, but other doc franchises tend not to retroactively enrich their previous chapters by virtue of tacking on a new one. Josh Fox’s Gasland: Part II, to pick on a recent example, arrived less than three years after the first episode helped expose the horrors of slickwater fracking. Both films are skillfully assembled screeds, and the sequel’s more explicitly political tack helps it stand apart from its predecessor, but it’s hard to deny that the seemingly urgent need to make Gasland: Part II exposes the ephemeral relevance of Fox’s incendiary first effort, reducing an Oscar-nominated documentary to a timely piece of agitprop.

And yet Sebastian Junger’s Korengal, which is composed entirely of leftover footage from 2010’s Oscar-nominated Restrepo (which Junger co-directed with the late Tim Hetherington), never feels like a needless assembly of outtakes, or the work of a filmmaker who might understandably be having trouble moving on. Restrepo gave witness to the 2nd Platoon of Battle Company as they struggled to survive a 15-month deployment in Afghanistan’s Korengal Valley, and Korengal revisits the same soldiers in the same hellish war zone.

No one who was alive during the Afghanistan War will be new to this story, and viewers who haven’t seen the first installment won’t be hurting for context—this is a self-sustaining film, and a valuable portrait in its own right. On the other hand, those who have already gotten to know the boys of Battle Company are in for a completely different experience, as this return journey to hell will feel less like a sequel than a recurring nightmare, perhaps the closest approximation to what it feels like to sign up for a second tour of duty in the worst place on earth.

The difference between Restrepo and Korengal is the difference between a first and second date, the scrambling chaos of the 2010 film replaced by the feeling of a steadily controlled escalation. Eschewing the vérité style that helped make Restrepo more of a visceral experience than a political one, Korengal instead opts for a comparatively traditional approach. Junger weaves together talking-head confessionals with serialized snatches of daily life in “The Valley of Death,” presenting each isolated episode with clear context and punctuating it with a hail of gunfire. The talking heads, filmed in a studio after the soldiers have returned home, eliminate the banal suspense of who will die, instead emphasizing Junger’s attention to daily life in Afghanistan.

The boys are bored. Between the moments of inconceivable terror and immediate retaliation, these young men are living a less explicitly homoerotic Beau Travail. They eat, they sleep, they go on patrol, and they try to develop relationships with the natives. They tattoo each other, play Rock Band, and stage imaginary fights between George Clooney and Fabio. Their lives are set to a droning rhythm that is only interrupted by tragedy, but the most reliably consistent thing of all is the soldiers’ shared preference for discussing who they’re fighting with rather than what they’re fighting for. Junger’s edit retains one of the company’s weekly meetings with the elders of the local village, but the attempt at diplomacy plows into such a broadly predictable stalemate that it only makes the conflict feel that much more anonymous.

Korengal isn’t a profound portrait of people fighting for our freedom, but a modest look at the human engine of the military-industrial complex, the lives lived inside the iron triangle that has defined America’s war efforts since the end of World War II. Junger’s filmmaking is too functional and baldly journalistic for Korengal to endure as a crucial document of the war in Afghanistan, but as a sequel, the film provides an illuminating counterpoint to Restrepo, unpacking “survival” as a process, where it was previously just a noun. Restrepo built toward a dramatic climax, but Korengal’s formlessness forces viewers to admit humility when confronting the age-old question of why we fight. The truth of the matter is that we don’t, they do, and our understanding is both futile and useless, so long as we benefit from their resolve.