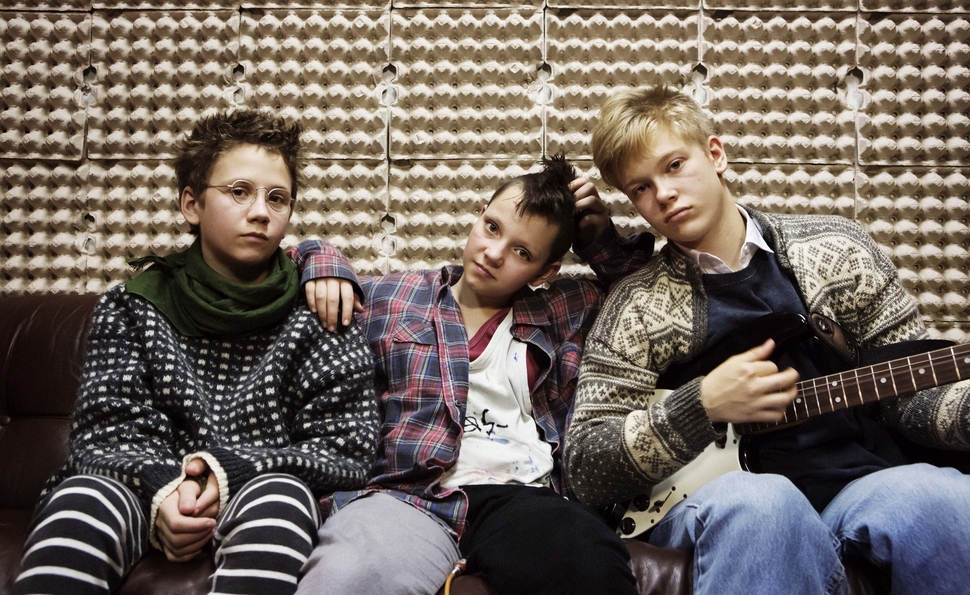 We Are The Best!

One of the great lies of rock ’n’ roll is that anybody can pick up a guitar, learn a few chords, and become the Ramones by the end of the day. In one of the funniest, truest scenes in Lukas Moodysson’s consistently funny and true punk-rock comedy We Are The Best!, Stockholm adolescents Bobo and Klara (played by Mira Barkhammar and Mira Grosin) gather in their rehearsal space to work on their new song, “Hate The Sport.” Even though the tune is crude and blunt, they still can’t play it. They have no sense of rhythm, and they lack the strength and discipline to hit the notes and beats with any consistency. For Bobo and Klara, being in a punk band is more about saying they’re in a punk band, not about actually making music. Besides, it’s 1982, and all their peers have moved on to new wave. They’re both pretty sure that punk is dead.

After spending the last decade making fairly bleak social dramas like Lilya 4-Ever and Mammoth, Moodysson returns to the cheerier, youthful mode of his Together and Show Me Love with We Are The Best!. What unites Moodysson’s best films is an awareness—rare in adults—of just how emotionally complicated kids’ lives can be. Immaturity helps the 12- and 13-year-olds in We Are The Best! bounce back quickly from heartbreak, and allows them to abandon their ideals whenever they become inconvenient. But these youngsters also don’t stick with any one mood or conviction all day long because they have so much else going on in their lives: school, hobbies, rivalries, romances, and scrounging enough money to buy snacks.

In We Are The Best!, Bobo and Klara’s daily grind of wandering into class late, ignoring their gym teacher, and defining what punk means (and how nothing in their Stockholm neighborhood qualifies) gets complicated when they decide to recruit a tall, shy, Christian classmate named Hedvig (Liv LeMoyne) to join their band, after seeing how well she plays guitar. While Bobo and Klara try to persuade Hedvig to abandon her faith—in part by playing her a punk song called “Hang God,” which they’re certain would be enough to turn any reasonable person away from Jesus—the classically trained Hedvig teaches them some of the rudiments of musicianship. Mostly though, adding Hedvig to the group gives the girls someone else to giggle uncontrollably with, and someone to help adjudicate their disputes over boys, music, and the best way to make soap-spikes in hair.

As vibrant and ingratiating as We Are The Best! is, the movie lacks the more satisfying fullness of Moodysson’s Together and Lilya 4-Ever. The film is based on a graphic novel by Moodysson’s wife Coco, drawn from her own memories of growing up as a punker in early 1980s Stockholm; it’s really more a string of uncannily vivid re-creations of the past than it is a well-crafted narrative. The big plot-hook in We Are The Best! is the “Santa Rock” post-Christmas concert the heroines are going to play along with other, more professional local bands. The only real suspense in the film is whether their ever-turbulent friendship will survive long enough for them to make the gig.

Yet while We Are The Best! never really goes anywhere, it’s such an enjoyably aimless trip that it scarcely matters. Between the snippets of another teen-punk band’s political anthem, “Brezhnev & Reagan” (sample lyric: “Fuck you”), and the girls’ amused indifference toward the rules of the games they have to play at school, We Are The Best! captures both the spirit of the early 1980s and the way pre-teens and teens have their own ideas of what’s important.

Plus, there’s a heartening feeling of camaraderie between these three young women, who share the giddy, fragile feeling that they’ve already met the best people they’ll ever know—which is why it’s so easy for them to hurt each other’s feelings. But the break-ups don’t last long, because even when they’re blue, they know just what to say to each other to lift their spirits: “You’re in the world’s greatest band… that’s one thing.”

GoWatchIt: Buy. Rent. Stream We Are The Best!