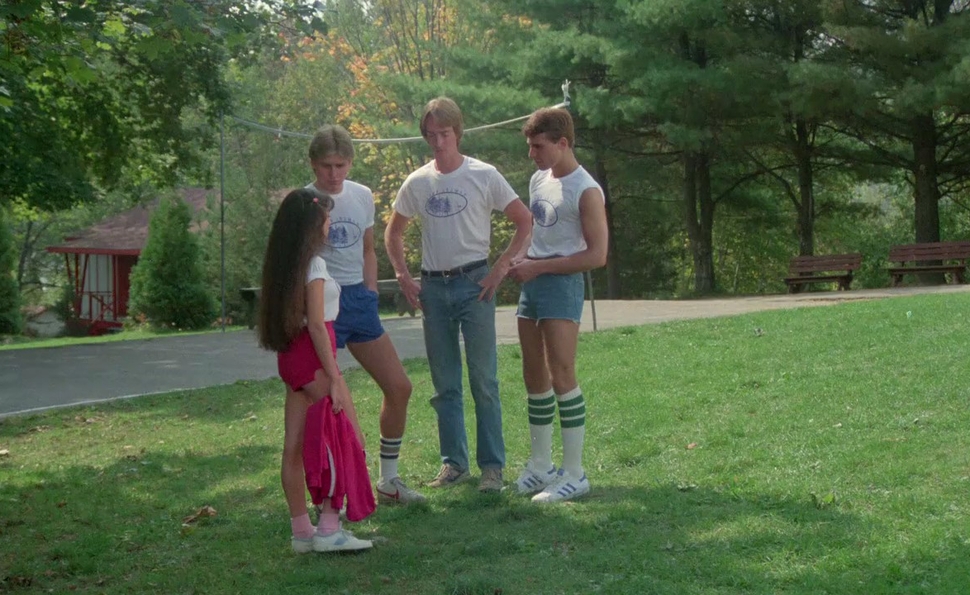 Let us ponder the cult majesty of Sleepaway Camp, the slasher era’s most bizarre and wondrous footnote. Writer-director Robert Hiltzik, a young NYU film-school grad seeking a path of least commercial resistance, opted to hop on the bandwagon by doing his own twist on the typical kids-getting-hacked-up-in-the-woods scenario. The key word there is “twist”: Before it even reaches one of the most sublimely nutty endings in cinema history, Sleepaway Camp keeps defying every possible expectation of how a slasher movie is supposed to behave. It isn’t really scary or atmospheric, but the implements of death, from a curling iron to a beehive, are exceedingly gruesome and unprecedented. It doesn’t announce itself as a horror-comedy, but the laughs come early and often, without a hint of self-awareness on the filmmakers’ part. Its summer-camp setting features actual teenagers, not overdeveloped twentysomethings masquerading as teenagers. And it has a psychosexual backstory like no other—one that not only accounts for the ending, but determines the hysterical pitch of the whole movie.

It opens with a boating accident. Two young children, Angela and Peter, are out on a lake with their father when their sailboat topples over and a runaway speedboat barrels through, killing Peter and his dad. (The deaths are inelegantly staged, to put it kindly. This becomes a pattern.) Eight years later, Angela (Felissa Rose), now living with her eccentric aunt and quiet to the point of near-catatonia, joins her more gregarious cousin Ricky (Jonathan Tiersten, misspelled as “Tierston” in the credits) for a summer at Camp Arawak. Though Angela attracts the attention of Ricky’s friend Paul (Christopher Collet, of The Manhattan Project semi-fame), Angela has trouble fitting in with her peers, who take her silence as arrogance, and tease her relentlessly. Meanwhile, a series of mysterious deaths begin to pile up, starting with a pervy cook who topples into a giant pot of boiling water, and another camper who drowns in the lake after hours. How many of these can be chalked up as accidents?

Quite a few, as it happens. One of the many great comic sidebars to Sleepaway Camp is Arawak’s cigar-chomping, skirt-chasing, pastel-ensconced leader (Mike Kellin), who frets, after three corpses and counting, that no one will want to send their kids to Camp Arawak anymore. There’s really no end to the strange revelations and bits of business, some of which are foregrounded, and other of which demand repeat viewings. For example, it’s funny that one of the counselors is a bodybuilder who dashes around in mesh shirts and ’80s short-shorts, but what to make of a shot of him pumping iron far in the background of a scene that has nothing to do with him? Or an entire baseball sequence with Ricky and Paul that has no bearing on the rest of the movie, save for establishing a rivalry with another group of boys in the camp? (Which barely pays off itself.)

These aren’t questions worth answering, just as questions about Hiltzik’s intentions aren’t worth debating. The beauty of Sleepaway Camp is that it isn’t “knowing” in the least, unlike its sequels or other such exercises in camp horror (or camp-camp horror, in this case). Some might be inclined to read its flat, uninflected tone as an indication of incompetence, and there’s certainly evidence that Hiltzik, a first-time filmmaker working with little money, isn’t in full command of his craft. But there’s an animating intelligence to Sleepaway Camp, too, or at least the brio to push the slasher subgenre into unexpected, outrageous new territory. There are great films and then there are magical films, glorious oddities that pop up sui generis out of nowhere. Sleepaway Camp falls squarely into the latter category.

A total of three commentary tracks offers 261 minutes’ worth of Sleepaway Camp talk. Two are taken from a previous DVD edition—an awkward dialogue between a reticent Hiltzik and Sleepawaycampmovies.com webmaster Jeff Hayes, and another with Hiltzik, Rose, Tiersten, and another moderator—but the most energetic of the three, recorded for this edition, features just Rose and Tiersten, who are full of funny stories about the shoot and the cult following that’s built up around the film. The 45-minute documentary “At The Waterfront After The Social: The Legacy Of Sleepaway Camp” is the highlight of the set, with all the major players talking about the unorthodox audition process, the inventive practical effects, and the hilarious behind-the-scenes story of how they got that shocking final shot.

But it wouldn’t be right for Sleepaway Camp to settle for conventional extras. There’s also Hayes’ no-budget video short “Judy,” starring the film’s chief mean girl as a justice-seeker who uses the infamous curling iron to torture an officious rich guy (and his new wife) for refusing to pay alimony. Tiersten’s musical ambitions are honored with the video for “The Princess,” a song that has no apparent connection to Sleepaway Camp, other than its singer. And there are theatrical trailers—given their gravel-deep voiceover narration, they could be slipped into Grindhouse without anyone noticing.