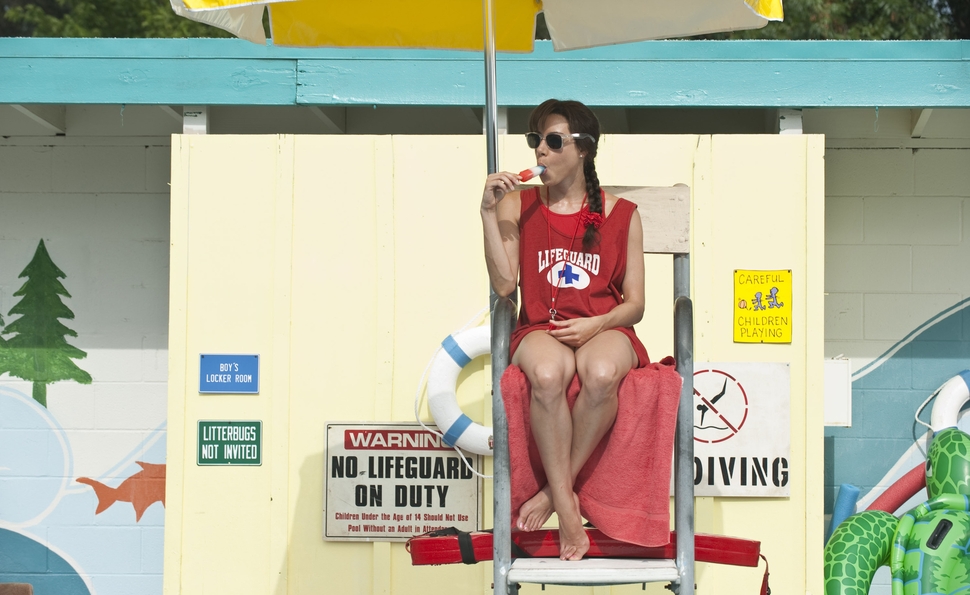 As The To Do List opens,  it’s the summer of 1993, and Boise, Idaho’s Brandy Klark (Aubrey Plaza) has little on her mind but getting through her valedictorian speech without embarrassing herself, and making sure she has everything she needs for college before fall rolls around. But the speech flops, and then her priorities change. Kidnapped by her worldlier friends Fiona and Wendy (Alia Shawkat and Sarah Steele) and taken to a real graduation party, with kegs and everything, she experiences a sexual awakening, in the form of a music-video-inspired fantasy sequence, upon seeing the shirtless Rusty Waters (Scott Porter) strumming out an acoustic rendition of “Pour Some Sugar On Me.” Later, when told by her older sister Amber (Rachel Bilson) that her freshman year at college will be “one big sexual pop quiz,” Brandy decides she has no interest in failing. So she fills her Trapper Keeper with the titular to-do list, as her thoughts turn away from acquiring shower slippers and toward acquiring experience, including experience of some acts she barely understands. If all goes according to plan, she’ll wind up losing her virginity to Rusty, who, coincidentally, will be spending the summer working beside her at the local pool.

A few different sorts of film vie for screen time in Maggie Carey’s feature debut, some of them sharing space more easily than others. One type is dependent on predictable but accurate early-1990s references. Relatively free of anachronisms—one too-soon Jerry Maguire reference excepted—the film gets the details right, from the videogames to the songs to the sexual frustrations of skorts. The authenticity helps offset the easiness of some of the gags; too often, period pieces simply pile up references from the years around their setting, and hope for the best. The To Do List tries to get at the core 1993-ness of 1993, at least on the surface.

But the nostalgia piece shares space with a frank, often funny tale of falling into sexual experience. That story rarely gets told from a female point of view in teen sex comedies, and The To Do List sometimes plays like a conscious correction of that pattern. Brandy goes about her quest methodically, treating it as a summer-long project without much regard for who pushes her toward her goal, or what anyone else thinks about it. That’s an attitude more at home in 2013 than 1993, when AIDS cast a much longer shadow, and slut-shaming was more cultural norm than boorish offense. Here, safe sex and the “s” word get mentioned only in passing before getting waved away. That loses The To Do List some authenticity points, but gives it a transgressive charge as Brandy moves from one list item to the next, with help from characters played by Donald Glover, Christopher Mintz-Plasse, Andy Samberg (who’s particularly funny as a traveling grunge musician), and Johnny Simmons as Cameron, Brandy’s floppy-haired former lab partner, whose feelings for her run deeper than the others’. 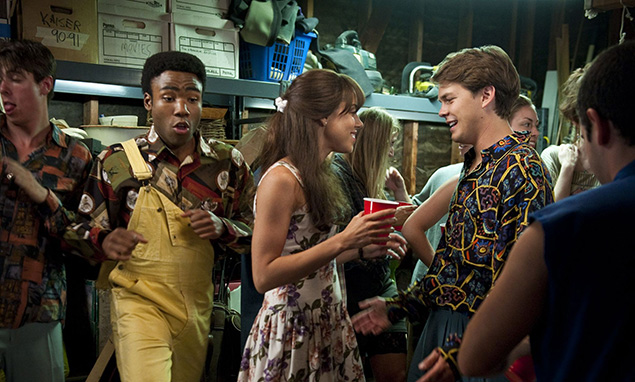 Better still are the moments when The To Do List becomes a relaxed hang-out movie set around the pool where most of the characters work, a downscale spot overrun with noisy kids and overseen by the down-on-his-luck Willy (Bill Hader). Most of the film’s best scenes rely on the comic chemistry generated by a cast that seems to enjoy playing off one another. Plaza and Hader, whose take on his character suggests a lifetime of disappointment without spelling out the details, are particularly good together, with Bilson, Clark Gregg, and Connie Britton providing some bright moments as Brandy’s family. The film is rarely better than when it doesn’t appear to be trying that hard.

The trouble starts when it does try too hard. There’s a strain of gross-out humor—most bodily fluids make cameos—that doesn’t mesh well with the rest of the movie. But more bothersome is a tendency The To Do List shares with its heroine: mistaking checking items off a list for progress. One sexual episode follows another without really building toward anything, making a finale in which Brandy spells out what she’s learned from her experiences ring all the more false. (It doesn’t help that Plaza—while always a wry, appealing presence—doesn’t really have the acting chops to convey what her character calls “feelings and emotional crap.”) That fits into the overall scheme of The To Do List, a film determined to treat sex as no big deal even as it obsesses over it. But it also makes the film itself, funny spots and all, feel like no big deal.