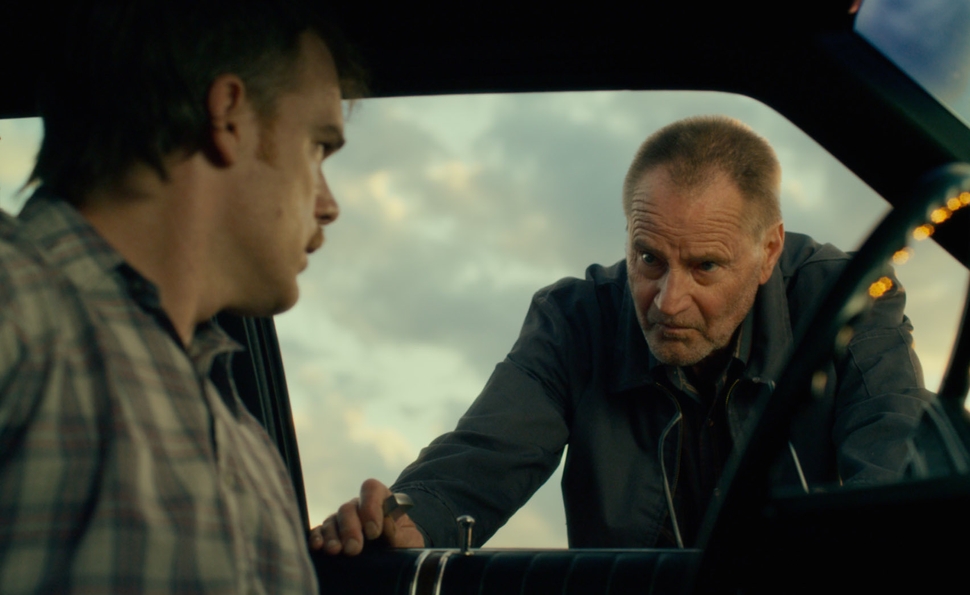 The first half-hour of Jim Mickle’s adaptation of Joe R. Lansdale’s seedy crime novel Cold In July closely resembles a horror movie, in style and intent. After an opening title sequence that borrows John Carpenter’s Halloween font—and Carpenter’s minimalist score, aped here by composer Jeff Grace—Mickle shows small-town Texas businessman Richard Dane (played by Michael C. Hall) hearing a noise in his living room, getting out of bed, finding a burglar, and shooting the intruder dead. It’s an intense scene, but topped later, when Richard learns that a man named Ben (Sam Shepard), who claims to be the burglar’s father, has rolled into town bent on revenge. The cops don’t take Richard’s concerns seriously at first, so in the days after he found one stranger in his house, Richard nervously waits for another to break in, all while keeping a watchful eye on his wife and child.

Again, all of this happens in just the opening third of Cold In July. There’s no slow build, no careful scene-setting. Incidents that most movies would save for the climax come and go in Cold In July while the audience’s popcorn is still warm. The film gets off to such a fast, frightening start that it’s hard to see how Mickle is going to sustain this plot for for another hour.

The answer is that he doesn’t sustain this plot, because Cold In July has other places to go. The film cleaves fairly neatly into three parts. Part two becomes more like a good-natured buddy picture, as garrulous Houston private eye Jim Bob Luke (Don Johnson) ropes Richard into a mission that involves investigating the Dixie Mafia. Then part three becomes an excessively violent noir, venturing into the dark heart of the Texas criminal underworld. At times, Cold In July almost seems like an anthology of short films involving the same characters.

Mickle’s previous three features—Mulberry St, Stake Land, and We Are What We Are—were all in the horror genre, while Lansdale has written stories and books in a variety of genres, united by his facility with plotting and character. It’s no surprise that Mickle seems most at home when Cold In July is in the mode of fraught suspense, although throughout the movie, he and his frequent co-writer Nick Damici take what Lansdale has given them and run with it. When the dialogue is funny, they make Cold In July a comedy. When bad men are shooting at each other, blood squirts everywhere. Meanwhile, Hall, Shepard, and Johnson—all excellent here—inhabit these very particular Texan types, on a strange, shared adventure.

The downside to Mickle and Damici’s choice to follow Lansdale’s lead is that Cold In July is almost all surface, with nothing new or profound to say about masculinity or the allure of danger. Richard is set up as a meek family man who’s initially embarrassed by the violent outburst that opens the story, but then feels obliged to keep up with the macho cool of Jim and Ben, in the name of keeping his loved ones safe. As good as Hall is in the role, Richard’s behavior always seems driven by plot demands, not by any inner passion to be a “good man.” (And while it makes narrative sense when Richard ends up spending a lot of time with a man who threatened to kill his son, Richard does seem implausibly sanguine about it.)

But even as Cold In July’s overall arc approaches something of a dead-end, the individual scenes and performances are remarkable. Plus, it’s rare to see a movie where the first five minutes reveal almost nothing about what the audience can expect in the last five. Cold In July begins with the botched robbery, and from there it’s go-go-go, with Mickle jetting from plot point to plot point with ruthless efficiency and almost no foreshadowing. This movie is more of a Ben than a Richard in that way. It looms over viewers like it can’t wait to kick their ass. And then it kicks.