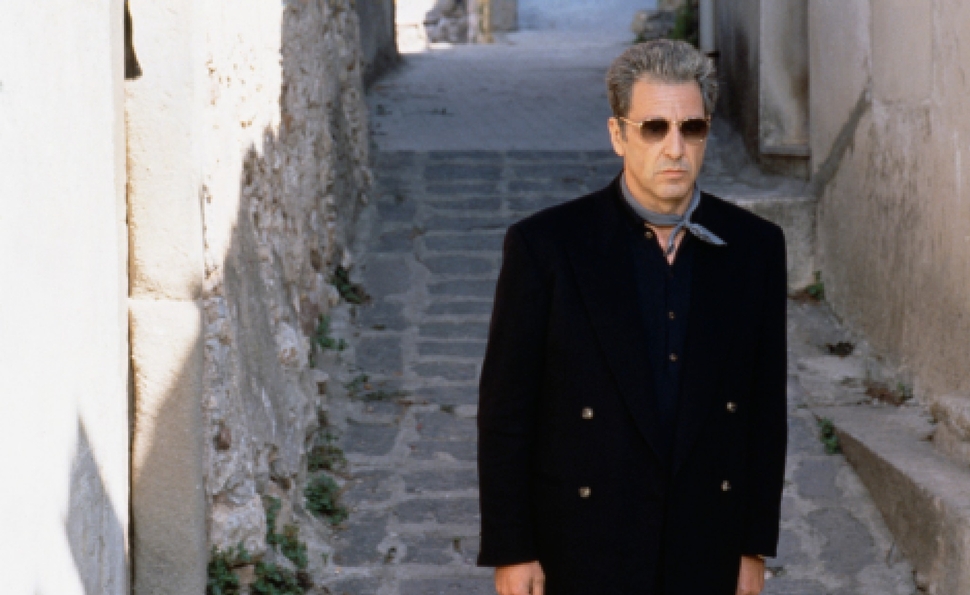 The Godfather Part III becomes an entirely different film when the original soundtrack is subbed out for Francis Ford Coppola’s DVD commentary. All the movie’s leaden expository dialogue disappears—as does the distractingly flat performance of Coppola’s daughter Sofia in a pivotal role. It’s also easier to pay attention to how The Godfather Part III looks, which matters a great deal, because on a strictly visual level, the third Godfather is as magnificent as the first two. Coppola had his most important collaborators back in place for the 1990 Godfather, including production designer Dean Tavoularis (giving an opulent world a lived-in feel) and cinematographer Gordon Willis (making sure everything looks simultaneously burnished and shadowy). Over all this, Coppola delivers one of his most fervent “poor me” monologues, which anyone who’s followed the director’s career will have heard him spout dozens of times before. Coppola laments how his power in Hollywood had diminished in the 1980s to the point where he felt he had to make another Godfather, even though he didn’t really want to, and he complains that Paramount Pictures steered him away from making the purely elegiac Godfather Part III he would’ve preferred. Over and over on the commentary track, Coppola compares himself to Michael Corleone: the ruthless genius in repose, manipulated by his enemies.

It was hard to know how to approach The Godfather Part III back in 1990. Watched as the third installment of a series that had already produced two of the best American films ever made, The Godfather Part III was (and is) a crushing disappointment. It’s a sluggish movie with nothing to say about the moral rot of the powerful that the first two parts didn’t say much better, and it’s weighed down by Al Pacino’s fairly inert turn as Michael Corleone, a protagonist who, to be fair to Pacino, does spend the lion’s share of the film trying his best to do nothing. Coppola and the series’ creator, Mario Puzo, are telling a story about the Corleone family’s umpteenth attempt to strike a deal that will simultaneously legitimize their business, atone for past sins, and sever all ties with organized crime. But it’s clear throughout that Coppola, in particular, doesn’t have any affection left for these people. Part of what made The Godfather so influential was that it made mafia life look exciting and convivial. In The Godfather Part III, there’s no one who would qualify as “good company.”

But there’s a level of cinematic artistry to The Godfather Part III that the countless mob movies and TV shows that followed the original Godfather have rarely been able to match. And Coppola’s own take on the film—as one long howl of frustration over what had become of his career circa 1990—lends the film an emotional dimension it otherwise lacks. As part of the “I am Michael” theme, Coppola talks frequently in the commentary track about how the press mocked his choice to cast Sofia, who’s in way over her head as Michael’s daughter Mary Corleone, a naïve young woman with an ill-fated attraction to her thug cousin Vincent (Andy Garcia). As Coppola has often said, the Godfather saga to him has always been about fathers trying to make a better life for their children, by making choices that ultimately spread sin to the very people they were trying to protect. With The Godfather Part III, Coppola threw his daughter to the wolves, but with the best intentions. It’s tragic.

That meta-reading of The Godfather Part III doesn’t excuse the long stretches of the movie that are just people standing around explaining the plot, nor does it make up for the way the “dominoes falling” cross-cutting of the climax (a Godfather movie tradition) is so slackly paced, with too-obvious parallels between the opera the Corleone family is watching and the Michael-induced slaughter happening around the world. Very little about The Godfather Part III is merely implied. Everything the movie means to say about sin, repentance, and fearsome legacies is just said, outright, by the Corleones and their circle of advisors and enemies.

But that doesn’t take away from the beauty of scenes like the one where Michael gives his long-overdue confession to the man in line to become the pope, while standing in an ornate garden. Or the touching chaos of the Corleone family gatherings, where cousins corner each other to swap the secrets of their clan. Or the breathtaking decay of the Lake Tahoe estate where much of the second film took place. As a visual poem about decline, The Godfather Part III looks more stunning with each passing year. If only the people in the picture would just stop talking.

The Godfather Part III has been released on Blu-ray before, as part of a full Godfather trilogy set, but this new edition marks the first time it’s been available on its own, a few years after parts one and two got the same treatment. The only extra carried over from the earlier discs is Coppola’s commentary, which in addition to its many, many self-pitying rants, includes a few disarmingly sweet moments, where he calls The Godfather Part III a “home movie,” and talks about how much his granddaughter Gia (now a filmmaker herself) has grown up since she played a little kid in the film. Coppola also speaks frankly about how he hates shooting violent sequences more and more as he gets older, and he makes some offhandedly personal observations about the rewards of a long marriage. But he saves his most tender tone for whenever Sofia is on the screen, as he reflects on the abuse she took from the press. Over one scene, Coppola is in the middle of a long reverie about real Italian cannoli when a shot of a teary-eyed Sofia pops up and stops Coppola short. “Aww,” he murmurs. “It’s hard to watch my daughter cry.”