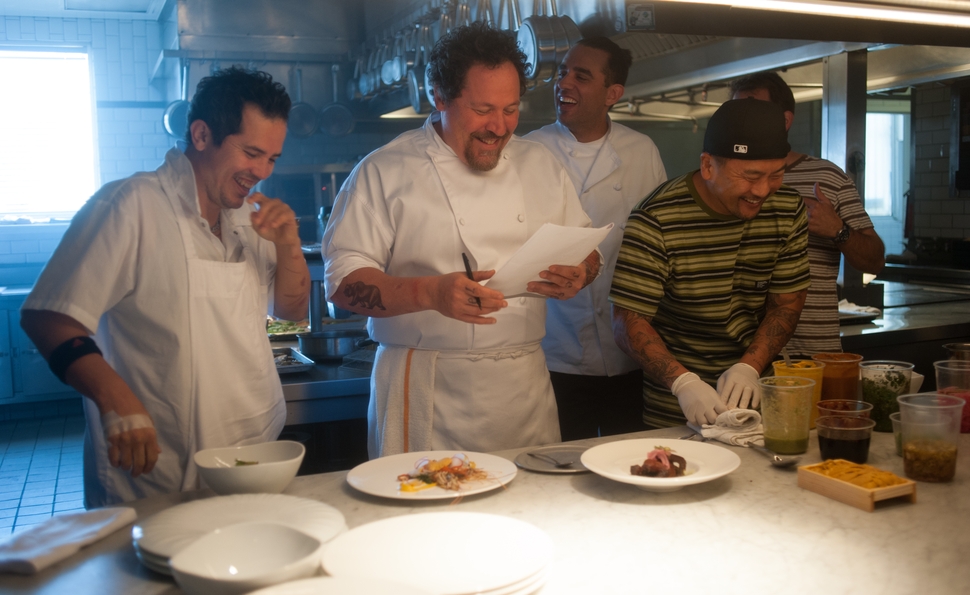 The rare commercial film that’s almost completely devoid of meaningful conflict, Jon Favreau’s Chef has all the drama of a Cuban sandwich, and yet there’s something truly bold in how this cuddly tale sticks to the frying pan and stays out of the fire. Where most ostensibly conventional three-act films sink their hero—and, by extension, their audience—to rock bottom as they enter the story’s final third, Chef gently slopes into a mild depression straight out of the gate, then spends the rest of its running time watching happy people gradually grow happier. Where most movies at least attempt to be a full meal, Chef is content to be a soufflé, steadily rising until it fills out. It may not be for all tastes, but there’s genuine value in a feel-good film that works this well without making viewers feel bad first.

Favreau stars as Chef Carl Casper, the uncompromising artist at the heart of Los Angeles’ trendiest restaurant. Sweaty, indefatigable, and endearingly perma-pissed at his loyal kitchen staff (John Leguizamo and Bobby Cannavale as Martin and Tony, respectively), Casper is everything television says a chef should be. He’s also an overworked Disney dad to his adorable 11-year-old son, Percy (Emjay Anthony), who spends more time with Carl’s rich ex-wife (Sofía Vergara, finally landing a role that lets her be a recognizable human, and not Jessica Rabbit’s live-action cousin from Colombia).

All told, things are pretty good for Casper—he’s even enjoying a casual affair with the restaurant’s hostess, played by Scarlett Johansson in Under The Skin hair and Captain America gloss—but everything falls apart when the restaurant’s owner (Dustin Hoffman as The Man) begins to exert control over the menu. Casper’s boss insists that he stick to the proverbial meat and potatoes rather than the more distinctive gastronomical delights on which the chef prides himself, and their disagreement reaches its boiling point when prominent food writer Ramsey Michel (Oliver Platt) pans the boring cuisine on his blog. Shortly thereafter, a public spat between Casper and Michel goes viral on YouTube, and the chef loses his job. Without a kitchen to call his own, Casper flies out to Miami with his kid, refurbishes a metal monstrosity into a food truck, and begins a cross-country drive selling Cuban sandwiches and rediscovering the joy of cooking.

And tweeting. And tweeting. And tweeting. Not since The Social Network has a film so revolved around the potential of social media, both for good and for ill. The Twitter account Percy creates for his dad’s business becomes a veritable phenomenon, ensuring that lines of hungry foodies are waiting for the chef’s truck to roll into their city. Percy creates Vines. He Instagrams. Each of his tweets is carried into cyberspace on the wings of a chirping animated bird. Building a guileless DIY campaign on the shoulders of his pre-existing celebrity (a model known in the biz as “The Braff”), Casper is empowered to directly engage with his customers and serve them food untarnished by administrative interference. His sandwiches ooze with juicy realness.

Viewers familiar with Favreau’s career will find it hard to ignore the parallels between his filmmaking trajectory and Casper’s reinvention, but Chef so insistently harps on the benefits of unalloyed art that the personal urgency of its agenda will also be palpable to those unaware of Favreau’s recent trials with huge summer movies. (Of Favreau’s Cowboys & Aliens, Universal Studios president Ronald Meyer once said, “It was a mediocre movie, and we all did a mediocre job with it.”) The fact that Chef features Iron Man star Robert Downey Jr. in a pivotal cameo as a snarky financial enabler only reinforces the film’s knowing self-reflexiveness, but the earnestness of Favreau’s script and the blunt simplicity of its pleasures let the autobiographical elements function more as welcome texture than petulant whining. If Favreau’s experiences have left him bitter, it’s commendable that he’s managed to turn lemons into lemonade, making a film loaded with star power feel like a scrappy labor of love by returning to the simple sincerity that helped Elf become such a career-boosting success.

Casper and Percy’s slow drive back to Los Angeles is packed with satisfying story beats, with Martin joining the father/son team as they stop in a handful of cities along America’s southern border. Taking advantage of time that might otherwise have been spent dragging the characters through any number of hollow crises, Chef pauses to explore the food cultures of the places the truck opens for business, so Casper can bond with his son over countless mouth-watering morsels. Whether exploring the fried delicacies of New Orleans’ French Quarter or the unspeakable glories of Austin’s Franklin Barbecue, the film is one of the most appetizing foodie spectacles this side of Big Night. Transparent but never raw, slight but seldom undercooked, Chef is hardly the year’s most satisfying film, but it’s rare to find a movie that leaves the audience just as happy as it is hungry.