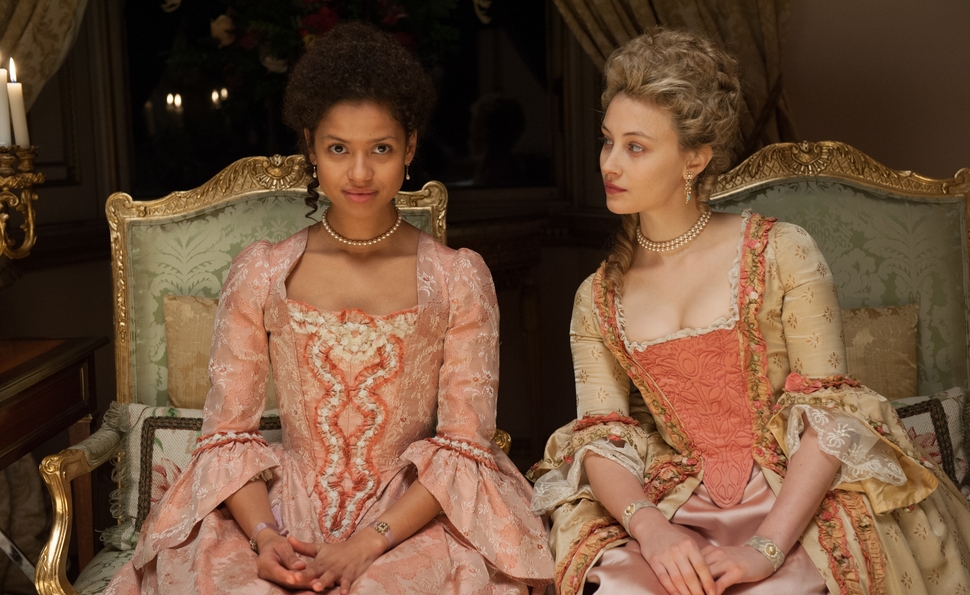 It’s rare to see a costume drama as utterly devoid of subtext as Belle, in which all the characters essentially say exactly what they feel at any given moment. In most cases, deeply repressed characters talk about everything but the complicated, painful matters that obsess them. In Belle, that’s all they seem to talk about. A handsomely mounted exploration of the intersection of race, class, propriety, and social standing, Belle is convincing largely because it argues a point no one would possibly contest: Slavery is immoral and spiritually damages everyone, not just slaves. It gives itself far too much credit for being more socially progressive than the inhabitants of the distant past.

Inspired by an image in a 1779 painting, Belle casts the radiant Gugu Mbatha-Raw as Dido Elizabeth Belle, the biracial progeny of a British naval officer and an African slave. Dido’s proud father Captain John Lindsay (Matthew Goode) dispatches his daughter to live in the regal family home in England under the watchful eye of the country’s top judge, William Murray, First Earl Of Mansfield (Tom Wilkinson), and his wife Lady Mansfield (Emily Watson). Lindsay insists his daughter be afforded the same rights as any other member of the family, but her race and illegitimate origins put her in a complicated position, somewhere above the family’s servants, but below the family itself, despite the best intentions of Murray, who loves Dido as if she were his own child.

Dido grows up to be smart and assertive, whereas her cousin and constant companion, Elizabeth Murray (Sarah Gadon), is flighty, insecure, and obsessed with finding a husband of proper breeding. Murray’s last name and skin color seem to bode well for her chances at brokering a proper marriage, but her stock plummets in high society once potential suitors discover her side of the family is penniless, just as Dido’s stock ascends once suitors discover that despite the scandal of her birth and the color of her skin, she has a sizable dowry that will make any potential husband wealthy.

Dido is soon torn between two men: John Davinier (Sam Reid), a passionate, crusading lawyer whose eyes come alive with fiery intensity when he discusses the abolitionist cause, and Oliver (James Norton) a cad with bedroom eyes whose sneeringly evil brother James (Tom Felton, more or less reprising his performance as Draco Malfoy) gropes and manhandles Dido just for the sake of being terrible.

Meanwhile, William Murray wrestles with an insurance-fraud case that could potentially threaten the legal legitimacy of slavery in the United Kingdom. He prides himself on holding his duty to the law above his personal emotions, but it’s hard to stay detached with his own biracial daughter passionately imploring him that there should be no conflict between what is legally right and what is morally right.

As a period production, Belle is gorgeous, dazzling spectacle, replete with ornate costumes, lovely sets, and in Mbatha-Raw, a striking, charismatic lead. But the film never finds a way to invest its narrative with a sense of urgency. Belle is didactic to a fault, filled with fiery rhetoric and righteous speeches that should have contemporary resonance, given the deathlessness of racism and social inequality. Instead, the film seems to belong to the distant past. Perhaps appropriately for a work of art inspired by a work of art, it feels detached, not so much a movie as a museum piece.