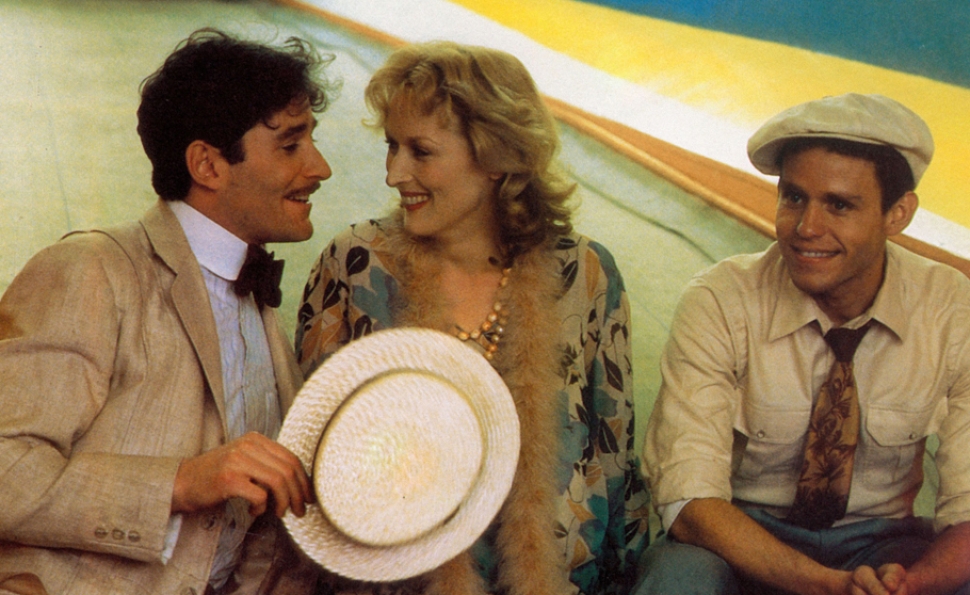 Alan J. Pakula’s 1982 adaptation of William Styron’s 1979 novel Sophie’s Choice is one of those films whose great qualities put its lesser elements in sharp relief. Chief among the former is Meryl Streep’s performance, which garnered her first Best Actress Academy Award and helped confirm her as one of the most formidable talents of her generation. Streep learned to speak Polish for the part of Sophie, a Holocaust survivor living in New York in the years after World War II. That might seem like a fussy bit of over-preparation, but the proof is in the performance, a chameleonic disappearance into the role. It’s overwhelming work, by turns earthy, sensual, and comic—but always haunted, even in moments of joy. The way Streep inhabits Sophie, and brings her history to life whether she’s explicitly talking about the past or carrying herself across the room with wounded grace, can’t help but make parts of the rest of the film seem smaller by comparison.

Sophie’s Choice has become famous, even to those who have neither seen the film nor read the book, for the awful moment that gives both their title. That scene falls late in the action, a climactic revelation Sophie has fled for the entire story. And though the Holocaust casts a shadow over the entire film, only a portion of its 150-minute running time portrays it directly. It’s not even Sophie’s story, primarily, at least not at first. This coming-of-age tale co-stars Peter MacNicol as a young Southern writer (and Styron surrogate) nicknamed Stingo, who travels to exotic Brooklyn to make his contribution to American literature. There, he becomes infatuated with his upstairs neighbor Sophie, and enthralled with her lover Nathan (Kevin Kline, making his film debut after establishing himself as an acclaimed theatrical actor). Nathan is fiercely intelligent, but prone to the wildest mood swings this side of City Lights’ Eccentric Millionaire. He berates Sophie, leaves her, then collapses into her arms hours later to start the process over again. In spite of the couple’s volatility, Stingo becomes their constant companion, learning the stories of their lives and how they converged, then puzzling over what keeps the couple together.

Though MacNicol is quite good as Stingo, the film is at its strongest when it focuses on him the least, using him as a lens through which to look at more fascinating characters. Kline is a marvel in a part that doesn’t make that much sense, even after a scene explaining his strange behavior. But it’s Streep’s movie, and her performance is a wonder of total commitment, from her awkward, almost-but-not-quite-there use of English to the subtle ways she conveys how close she is to falling apart. Early on, Nathan boasts of nursing her back to health after finding her collapsed in a library. “She began to bloom like a rose,” he says. But Streep’s performance suggests Sophie is a flower of a far more delicate kind, one sure to wither with even a slight change in the atmosphere.

Working with cinematographer Nestor Almendros, Pakula shoots the film with a nostalgic overtone, with a tendency to get engulfed by shadows. Pakula employs long takes that let the performances breathe, and uses close-ups sparingly, but with tremendous effectiveness. A shot of Sophie, glowing in the moonlight and haloed by shadows as she recounts a particularly painful chapter of her past to Stingo, ranks among the best moments in the careers of all those involved. When the film flashes back to Sophie’s time in Poland, it takes on a different look, dominated by desaturated colors that suggest a land with the vitality being drained from it—apart from one devastating shot in which a door opens out of the Auschwitz death camp that’s become Sophie’s home, and onto a thriving private garden of the camp’s commandant.

These scenes are unsparing in their details, and powerful enough to make it hard to care about whether Stingo makes it as a writer, or comes to all the revelations about life and love that young writers tend to reach in stories about lost innocence. The two stories aren’t exactly at odds; they’re unified by Streep’s presence in both, but one makes the other seem almost inconsequential by comparison. In time, even the film seems to recognize this, letting the attention fall squarely on Sophie as she revises her tale and works toward speaking of the unspeakable choice at the heart of it, a moment that offered her only awful options,  and none that let her live with herself when it was through. History can sometimes crush even those it lets live.

Only a trailer and two features, but they’re both substantial. On a thoughtful commentary carried over from a previous DVD edition, Pakula, who died in a car accident in 1998, speaks thoughtfully about the process of adapting the book to film—a two-year process that almost collapsed after the first week of filming. In a new 45-minute roundtable conversation, Streep, Kline, and the widows of Pakula and Styron join other Pakula associates to talk about the movie. It’s a fond, freewheeling discussion that addresses, among other topics, how close Streep came to not getting the role, and losing out to an unknown Polish actress whom Pakula liked. The best stretch, however, finds Streep detailing her preparation for the film’s most famous scene, which involved hanging out and playing with the young actress cast as her daughter, then going to the set.“I didn’t act,” she says of the results. “It was just what happened in the moment.”