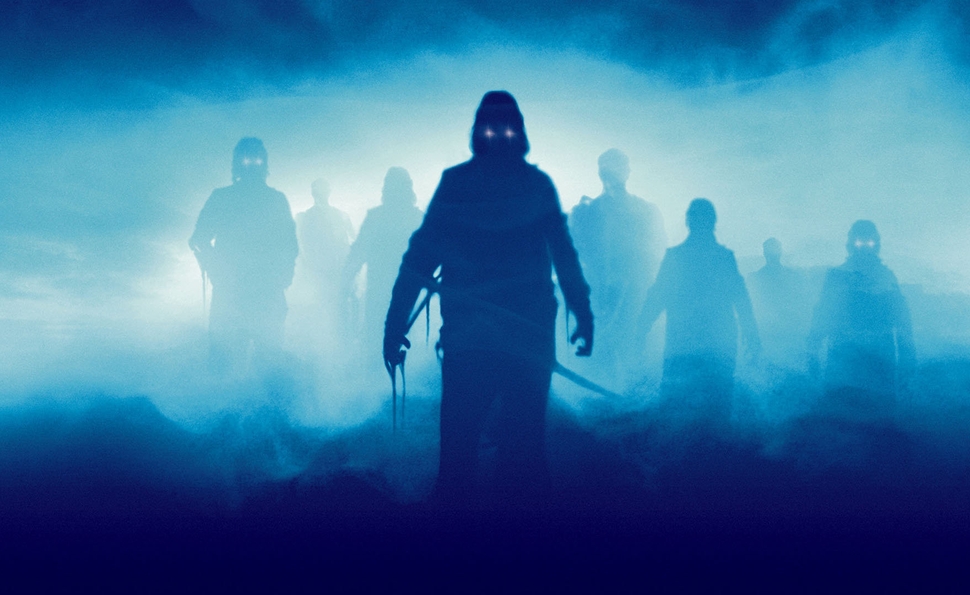 The breakout success of John Carpenter’s 1978 horror standard Halloween brought the director instant up-and-comer notoriety, and some grudging respect from critics after an initial round of knee-jerk pans. But it also put him in a difficult spot: Not only did he have to follow up a cultural phenomenon, he was now recognized as the godfather of a slasher movement that many abhorred. And though Carpenter’s 1980 film The Fog was tepidly received, his solution was calculated and elegant, giving audiences the Halloween-style impalements they might have expected, while also couching the film in old-fashioned horror atmosphere. Carpenter made it clear that he wasn’t skinny-dipping in the same lake as his slasher contemporaries; Halloween brought classic genre style into a new era, and The Fog goes even further in that direction. (Casting Janet Leigh in a supporting role is just a start.)

The delicious opening scene, following an evocative Edgar Allan Poe quote (“All that we see or seem is but a dream within a dream”), literally establishes The Fog as a campfire tale writ large. With a pack of young campers gathered around the fire at 11:55 p.m., a grizzled sailor (John Houseman) uses the last five minutes of the day to warn about the vengeful spirits swooping into the sleepy coastal burg of Antonio Bay, California, after midnight. Exactly 100 years earlier, a clipper ship was traveling at night near Antonio Bay to set up a leper colony, but six conspirators created a false beacon by starting a fire near treacherous rocks. The clipper crashed and sank, killing everyone aboard, but now, as the town is celebrating its centennial, the undead victims are rolling in with the fog, anticipating revenge.

Carpenter and producer/co-writer Debra Hill populate Antonio Bay with what seems like only a few more citizens than the six marked for death. (The budget wasn’t terribly generous.) But they’re clever to unify the town through the voice of Stevie Wayne (Adrienne Barbeau), a local DJ who broadcasts from a lighthouse and acts as a kind of meteorologist once the glowing death clouds reach the shoreline. Among the thinly sketched characters are a rebellious young hitchhiker (Jamie Lee Curtis) who takes up with her ride (Tom Atkins) on her way through town, two women (Leigh and Halloween’s Nancy Loomis) who are busy trying to stage the centennial festivities, and a priest (Hal Holbrook) who uncovers a journal that exposes Antonio Bay’s dirty little secret.

The campfire-story opening was added later, after Carpenter fretted over the rough cut, but his instincts were good: After the camera drifts away from Houseman’s storyteller and into the midnight sky, Carpenter segues into one of the strongest, most purely cinematic sequences of his career. Without having to worry too much yet about the tedious business of establishing characters and conflicts, he can fully exploit the title effect. As the fog blankets the town, the entire place comes alive with hauntings—car horns blaring, a gas pump flooding the station, a convenience store popping with exploding bottles—and the lone ship at sea, full of boozy sailors, confronts the cadre of dark figures with knives and meat hooks. Cinematographer Dean Cundey, a master of hiding shadows within the frame—his work on Halloween II is the main reason to see that film—does fine work blasting light into clouds of smoke, the effect of which is more ghostly than clarifying.

But after that initial flourish, The Fog has to come back down to earth, and this is where Carpenter and Hill struggle to hold the same level of interest. The cast is well chosen—and their decision to give characters names like Dan O’Bannon, Nick Castle, and Dr. Phibes speaks to an eagerness to please cult followers—but they don’t play compelling people, and they don’t come together as a unit until it’s too late for a group dynamic to develop. Long stretches of The Fog go completely flat, and leave viewers with little to do but wait around for the next kill. In that sense and that sense only, The Fog has more in common with its lesser contemporaries.

Fans know Carpenter as a commentary-track specialist, so his team-up with Hill, ported over from a previous edition, is essential listening. But the new Scream Factory release adds a second commentary with Barbeau, Atkins, and production designer (and Halloween III director) Tommy Lee Wallace. As for the other supplements, a Jamie Lee Curtis interview (called “My Time With Terror”) finds her relaxed and charming on a fog-filled day at home, recalling how she got no offers after Halloween and was reduced to taking one-off roles on TV shows like Charlie’s Angels (as a pro golfer!) and The Love Boat. Casting her in The Fog was a friendly gesture on Carpenter’s part, but Curtis admits to feeling the on-set tension between Carpenter and Hill (who had just split), and Barbeau, who was Carpenter’s new girlfriend. Cundey gets 20 minutes of his own in a featurette called “Dean Of Darkness” that gets into his great collaboration with Carpenter and their mutual interest in careful composition and visual storytelling.

The other features tackle The Fog from different angles, including a vintage eight-minute clip (“Fear On Film: Inside The Fog”) that references the personal issues affecting the production, and a more recent, fleshed-out 30 minutes (“Tales From The Mist: Inside The Fog”). Better than either is a storyboard-to-film comparison that puts Carpenter’s detailed drawings above the sequence where the sailors encounter the undead at sea, and a segment from Sean Clark’s web show, Horror’s Hallowed Grounds, that visits the locations.