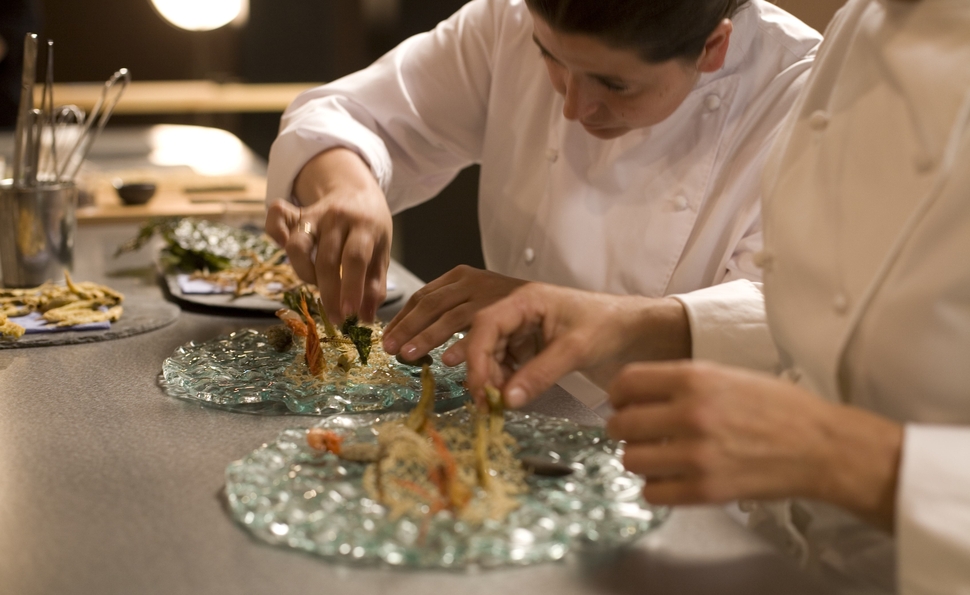 “People don’t have patience anymore,” one character laments in Roger Gual’s Tasting Menu, but that ostensibly poignant observation becomes a damning auto-critique as this charmless romantic comedy caters to its audience’s imagined demands like a waiter afraid of losing a tip. Simultaneously undercooked and overstuffed, Gual’s third feature is an appetizing fusion of Love, Actually and Big Night, but there’s no point to an inimitably lavish prix fixe dinner if it only caters to the broadest of palates, and it’s a fatal misstep for a film about such a meal to insist that every viewer likes every course.

Solemn-faced Mar (Vicenta N’Dongo) has been named the best chef in the world on three separate occasions, and the film begins with her appearing on a Spanish talk show, where the host claims she’s “revolutionized the concept of food.” Not just the preparation of certain foods, but apparently the entire concept of food itself. (Cue Steve Jobs’ voice: “A phone. An iPod. A hamburger. These are all one device.”) This canned opening scene suggests Tasting Menu is laying the groundwork for a culinary riff on I Am Legend—slam-cut to a near future in which man is the ultimate amuse-bouche—but no, Mar is just skilled with a crockpot, and only on the program to promote the closing night of her famed restaurant.

A tiny Catalan eatery with three Michelin stars certainly doesn’t need any help in convincing customers to come for its final meal, and the news that all 30 seats have already been reserved makes it clear that Mar’s television appearance is nothing more than a dry apéritif of exposition. Mercifully, Gual only devotes plot threads to a dozen or so of those diners, all of whom are drawn to the restaurant for one unique reason or another, bumbling around like the cast of a Garry Marshall movie without a holiday to shape their stories. There’s the great Fionnula Flanagan as Countess D’Arcy, an old lady who dines across the table from an urn filled with the ashes of her late husband. (“He wouldn't have wanted to miss this.”) There’s Stephen Rea as Walter Riley, whose hammy performance as a “mysterious” American the staff mistakes for a critic is sadly the closest the film gets to food porn. Togo Igawa is one of two Japanese investors intent on bringing Mar to the kitchen of a new restaurant in Tokyo, while Gaul’s partner Marta Torné plays the chatty assistant who sits between the businessmen for reasons that are never adequately explained.

To the degree that Tasting Menu has a central plotline, it’s the one shared by Rachel and Marc (Claudia Bassols and Jan Cornet, respectively), a recently divorced couple forced to confront their failed relationship at Mar’s restaurant because neither of them was willing to part with their seat at the table. Much to the chagrin of Rachel’s cartoonishly evil new man, it looks like love might be for dessert. The film is so busy attending to all its people that it never manages to adequately serve any of them—a failing personified by a drunk waiter who confuses his interchangeable customers. Gual’s stories are so threadbare that relocating the film for a bizarre third act does little to deviate from the array of obvious outcomes. The subplots pool into a halfhearted reminder to live every night like it’s closing night, an idea so derivative that the film is practically Babette’s Leftovers.

Mar’s restaurant is filled with so many characters that it retains no character for itself. Never more compelling than any of the half-formed people sharing its last meal, the generic dining-room set where most of the film transpires is an uninspired mess of round tables and deep shadows, boasting less flavor than a still photo of the film’s obvious real-world inspiration (El Bulli, Ferran Adrià’s defunct mecca of haute cuisine).

Even more confounding than Gual’s inability to create a memorable restaurant is his apparent aversion to filling it with visible food. Movies about food don’t just prove the old axiom that it’s better to show than to tell, they make it unspeakably easy to follow. Blue Is The Warmest Color, whatever its faults, convincingly illustrated how simulated sex has a far less salivatory effect on an audience than unsimulated food. And yet, not only do viewers have no idea what makes Mar’s cooking so great, the camera seems unwilling to examine it. And while a stringent refusal to display the dishes might have engendered a certain aura, scattered shots of a salad here or a shellfish there evince no such pointed discipline. As a result, Tasting Menu is likely to whet the appetite about as much as The Unknown Known.