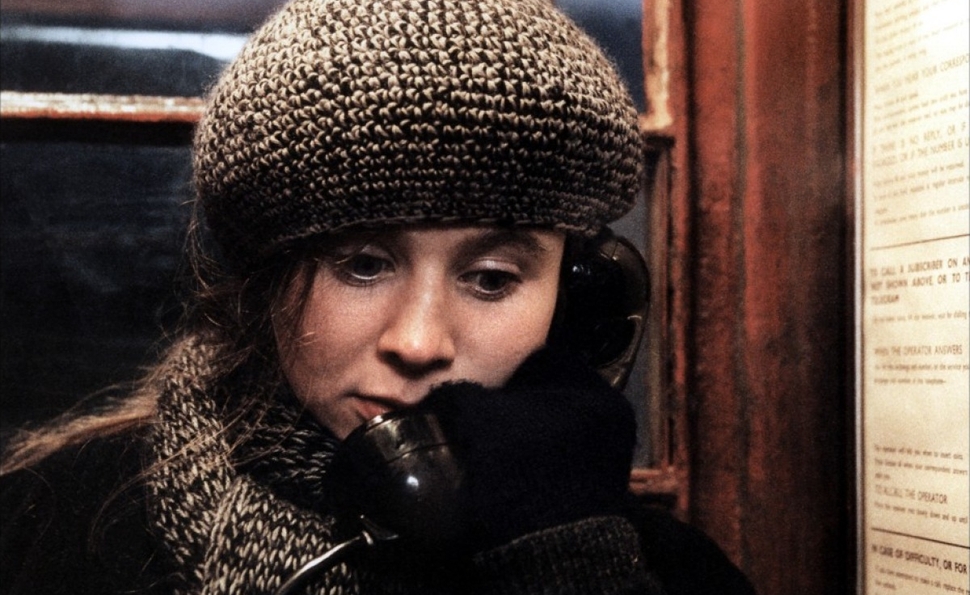 Bess McNeill is a good person. That’s the starting point for Lars von Trier’s Breaking The Waves, which is about how that goodness gets tested by the institutions of marriage and religion, and by the enlightenment and corruption of the modern world. As conceived by von Trier—with plenty of guidance from his own spiritual godfather and countryman, Carl Dreyer, particularly The Passion Of Joan Of Arc and Ordet—Bess is as much phenomenon as human being, representing Innocence with a capital “I” rather than the more compromised form of the mortals surrounding her. Her devotion to God, which transfers into devotion to her new husband, is so profound that even those closest to her regard her as hopelessly naïve and “stupid” at best, if not outright crazy. It’s a testament to Emily Watson’s astounding performance as Bess that she comes across as more than a von Trier construct; she’s a woman of boundless passion, who follows her faith wherever it takes her. Her strength is the source of her vulnerability, and vice versa.

A transitional film for von Trier, Breaking The Waves arrived just before the Danish enfant terrible chucked the stylized artifice of early films like The Element Of Crime and Zentropa for the grungy tenets of his Dogme 95 movement. Von Trier has since returned to the fold, but Breaking The Waves is the best of both worlds: The simplified, handheld camerawork and the idea of “cutting for emotion” rather than continuity gets the most out of his actors, who are free to clash and improvise within a scene without worrying about hitting their marks. At the same time, though, von Trier and his great cinematographer, Robby Müller (Down By Law, Dead Man), capture the harsh, windswept beauty of the Scottish countryside in the early 1970s—a location so isolated and out of time that it’s a broken-down moped away from the 1870s or the 1770s. And Dogme-era von Trier wouldn’t have attempted anything like the painterly chapter headings that mark both the phases of Bess’ story and her wish for transcendence.

“Can you tell me anything of real value that the outsiders have brought with them?”, a Calvinist minister asks Bess on the eve of her marriage to Jan, an oil rigger who doesn’t meet with his approval. “Their music,” she answers with a smile—music by Elton John, David Bowie, Jethro Tull, and T. Rex that von Trier blasts over the chapter cards. Rock “corrupts” Bess, as it has generations of rebellious children before her, but von Trier doesn’t join the Calvinists in condemning her for it; on the contrary, it just underpins the passion she redirects toward Jan as she opens herself up to the possibilities of a new life. Her sister-in-law and best friend, Dodo (Katrin Cartlidge), knows Bess well enough that she’s alarmed by Bess’ unbridled enthusiasm over Jan, and equally adamant that the raffish charmer handle her with care.

After a brief period of marital bliss, Jan is summoned back to the offshore oil rig for a few months, leaving Bess in a state of drastic emotional duress. She talks to God about it, and it’s a two-way conversation: Her quietly pleading, with her eyes to the heavens, Him talking through her with Old Testament resolve. Bess begs God to bring Jan back to her before his 10-day leave, and her request is granted, cruelly, when an accident leaves him paralyzed and on the brink of death. As his condition worsens—and Bess refuses to let him die—Jan requests that his wife revive their lost intimacy by having sexual encounters with other men and reporting the details back to him. This forces Bess, a virgin on their wedding night, into increasingly degrading and dangerous situations, and leads to her ostracization in the community.

The question hanging over Breaking The Waves is whether Bess’ relationship with God is real, or she’s simply not right in the head. Von Trier cares about the answer—and it could go either way, based on his subsequent work—but he cares more about how a life-force of Bess’ purity can endure the cruelty, hypocrisy, and venality of the world around her. Though his close-ups of Watson aren’t as rigorous as Dreyer’s of Maria Falconetti in The Passion Of Joan Of Arc, her eyes tell much of the story, and the film’s muted sepia palette assures that viewers’ eyes don’t wander too far from her, either. Once Bess starts putting on fishnet hose and offering herself up on the docks, von Trier puts her through the wringer, but it’s worth remembering that Bess was living in extremes well before her sexual odyssey. There are no bells at Bess’ church, and only the men may speak aloud; those who fail to abide by God’s law are openly condemned to hell during their funerals. The ascetic demands on Bess are harsh, the consequences for straying are harsher, and von Trier makes it clear that her decision to acquiesce to her husband’s demands is connected to her fealty to God. Her circumstances are altered by fate, but her fundamental nature isn’t.

At the same time, von Trier doesn’t offer her up as a paper saint. If Bess’ communication with God is real, then maybe she is punished for putting her need for Jan over the needs of others, including his employers. And maybe she does err by honoring and obeying her husband while ignoring moral dictates, or even the likelihood of poor health twisting his psyche. Breaking The Waves stands with her all the way, but that doesn’t mean Bess’ spiritual purity comes without struggle from within. Her faith may be simple, but put into practice, the film makes it anything but.

Rather than chattering over the entire 159-minute film, von Trier, editor Anders Refn (Nicolas Winding Refn’s father), and location scout (and future cinematographer) Anthony Dod Mantle do a scene-specific commentary track that spans a tight 47 minutes. The three talk about disregarding conventional filmmaking rules to better serve the actors and emotions, the influence of TV shows like Homicide: Life On The Street on the film’s “ugly” style, and how von Trier’s anxieties about being on a ship forced him to direct the final scene via video link-up. In an interview, critic Stig Björkman goes further into von Trier’s neuroses, which are salved in part by the filmmaking process, and claims Breaking The Waves is the breakthrough moment in his artistic career. Watson, Skårsgard, and actor Adrian Rawlins also give interviews—the first two recorded for Criterion, the latter in a two-minute clip from 2004—and all have great insight into von Trier’s unusual but effective methods for working with actors. (Skårsgard on how he reacted to von Trier’s script: “Yes! Finally a love story I can relate to!”) Also included on the disc are several deleted and extended scenes, and an isolated deleted scene that doubles as a tribute to the late Cartlidge, who’s seen cracking up at the end of the take. As a fun bonus, there’s even von Trier’s “preview clip” to Cannes, in which he refuses to show any footage from Breaking The Waves out of context, but makes a silly Scottish joke instead.