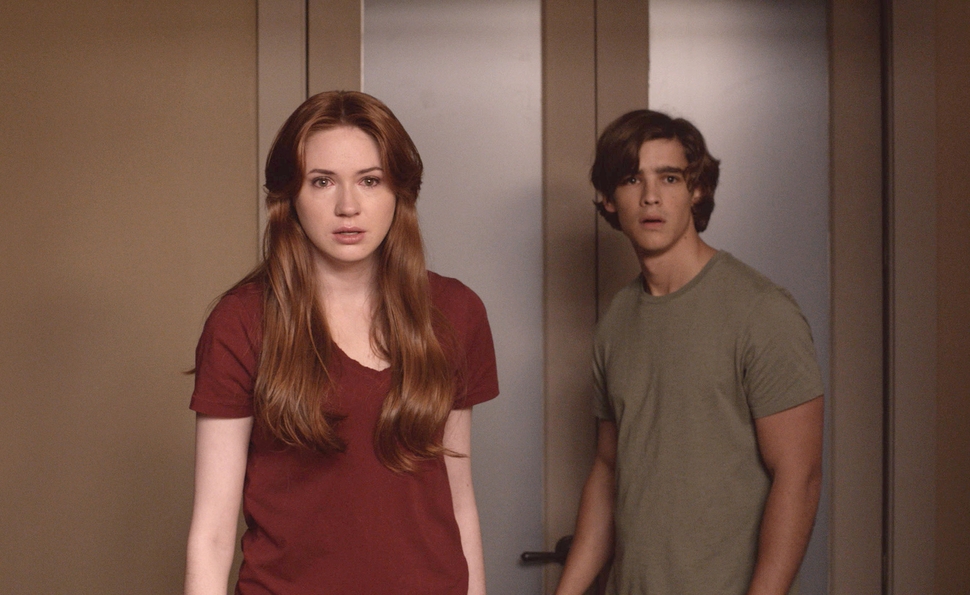 Up to a point, Oculus deserves credit for the scares it doesn’t deliver. A horror film from Absentia director Mike Flanagan, Oculus concerns a malevolent, centuries-old mirror, an inanimate villain that seems to lend itself to only one horror-film cliché, the one in which victims gaze at their reflection, while behind them, horrible doings start a-happening. Oculus doesn’t avoid that device, but it’s hardly the only trick the film knows, and Flanagan keeps finding novel variations on what it might mean to confront a piece of glass with ill intentions. If anything, this inventive but chaotic film overflows with more ideas than it can keep under control. It’s as if, given a selection of possibilities for what a murderous mirror might do—distort reality, suggest another dimension living just below the glass, serve as a metaphor for how we remember the past—Flanagan selected all of them, and hoped for the best.

It’s a film of reflections in more than one sense, unfolding on two connecting timelines. In one, set 10 years in the past, young actors Annalise Basso and Garrett Ryan play Kaylie and Tim, a brother and sister who’ve just moved into a spacious new suburban home. All seems well between their mother Marie (Katee Sackhoff) and father Alan (Rory Cochrane), until Alan starts spending more and more time in his study in front of an antique mirror, and Marie slowly starts to go insane. In the second timeline, set during the present day, a grown-up Kaylie (Doctor Who’s Karen Gillan) uses her position in a high-powered auction house to score some time with the mirror, dragging it back to her childhood home just as Tim (Brenton Thwaites) gets released from a mental institution on his 21st birthday. Though initially resistant, Tim joins her scheme to destroy the mirror, as they vowed to do as children after a traumatic incident.

Tim’s reluctance isn’t just rooted in the sensible desire to spend as little time with creepy mirrors as possible, though. His memories of the past differ from Kaylie’s. Where, for instance, Kaylie recalls their family dog disappearing into the study, never to emerge again, Tim remembers the same dog dying after a long illness. For a while, Oculus plays intriguingly with those discrepancies. It’s also clever in the way it brings the two timelines together, with the hallucinating Kaylie and Tim walking into their memories and encountering their younger selves—like a cross between Poltergeist and Wild Strawberries—and in the devices Kaylie constructs to prove the mirror’s true nature. These include several cameras, backup safety systems, regular breaks for snacks and hydration, outside help, and, hovering above it all, a fail-safe that will smash the mirror unless human hands reset a timer.

As to why Kaylie doesn’t just skip to the smashing portion of the plan, the film offers several excuses that never entirely add up. But when Oculus works, they don’t have to. In the film’s slow build-up, Flanagan keeps finding creepy images and unsettling moments. He’s particularly adept at investing the kids’ home with menace in the middle of the day, using draped, shadowy interiors that suggest the sun outside can’t penetrate the gloom. Also good: sequences that convey the mirror’s ability to warp perception, letting a scene play out, then having the characters watch their recording of the same scene to see what really happened.

In the end, however, all those devices collide into an undistinguished heap of creepiness, particularly once Oculus starts the obligatory ratcheting-up of the body count. The climax makes the action faster, bloodier, and louder without really intensifying it. Flanagan and co-writer Jeff Howard adapted Oculus from “Oculus: Chapter 3–The Man With The Plan,” a short film Flanagan co-wrote with Jeff Seidman. It’s to Flanagan’s credit that it feels more overstuffed than undernourished, but he’s just traded one problem for another. Oculus takes a potentially corny premise further than most could, but it keeps stumbling on the possibilities, never quite taking any of them all the way.