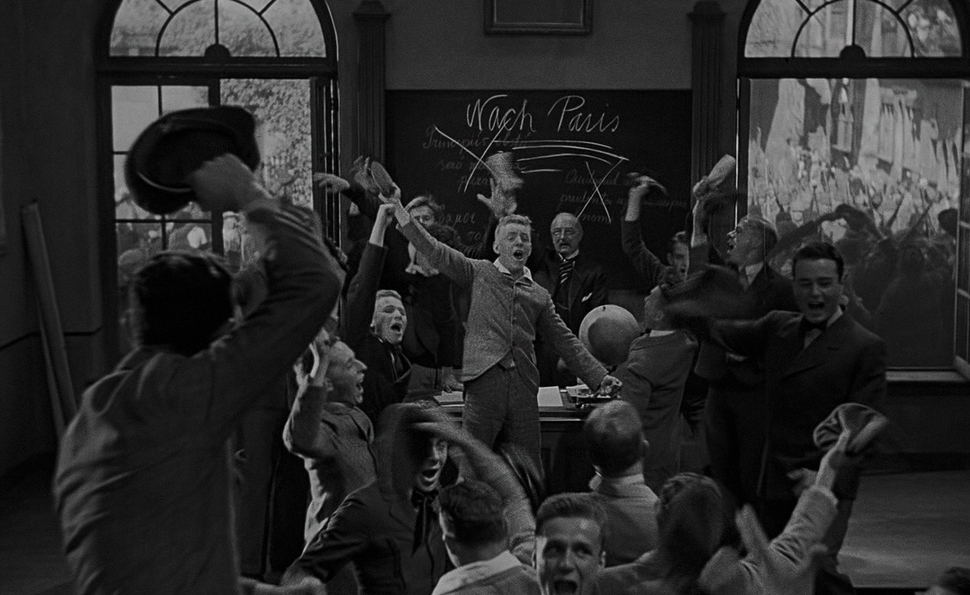 For the most part, the 1930 prison drama The Big House looks flatly realistic and spare, like a stage play on film. When the inmates are gabbing in their cells, or taking bets on cockroach races in the yard, director George W. Hill tends to frame them squarely, making sure the audience sees how little the characters have in their living spaces, aside from each other. And they have too much of each other, too, since the movie is set in a prison serving 3,000 inmates, rather than the 1,800 it’s supposed to house. Sometimes, though, Hill goes grand. Early in The Big House, new convict Kent (Robert Montgomery) arrives at an institution that from the outside looks like an imposing, futuristic fortress, thanks to some impressive matte work. And later, when Kent’s two cellmates, bruiser Butch (Wallace Beery) and kind-hearted Morgan (Chester Morris), are suffering through another dinner of spoiled fish stew, Hill cuts to a wide overhead shot of the mess hall in the middle of a food fight, quelled by the shots of the guards above. The men look tiny, and the puffs of smoke from their guns look just as small. But they’re all part of a larger order.

In the 1930s, Warner Bros. developed a reputation as a studio committed to social justice, exposing real-world ills in films that were blunt about their meaning. But The Big House is an MGM film, and while it takes on the problem of prison overcrowding, at times it’s more like a window into a secret society, with its own codes and concerns. It’s an outsized, abstracted version of everyday life circa 1930. The key to The Big House is the relationship between the three principals: Kent, Butch, and Morgan. Kent represents the everyman, out of his depth, behind bars because he killed someone while driving drunk. Butch and Morgan are more acclimated to their surroundings, and practically run the prison, with the shrewder Morgan helping keep the impulsive, often violent Butch in check. But all of them have to bow to the will of the well-meaning warden (Lewis Stone) and his armed lackeys, who make sure to break up the party if the prisoners ever seem too happy.

As one of the early sound films, The Big House is light on cinematic fillips, aside from those occasional memorable shots, and the extended firefight during the film’s climactic escape-attempt-turned-riot. Instead, the movie is talky and plotty, with third-act twists that feel arbitrary and ridiculous. The Big House is best in its first hour, when Hill and screenwriter Frances Marion are establishing the milieu. There, the movie keeps contrasting the dehumanizing rituals of prison life—such as getting fed like hogs, with slop ladled into a trough—with the moments where the inmates get to feel like real people for a minute or two. Even ill-fed and cramped, these men are able to enjoy a moment of peace singing a hymn at the chapel, or even just lying in their bunks and talking. It isn’t in the punishment where they get rehabilitated. It’s when reminiscing together about life on the outside and the girl he once loved that Butch is finally able to realize, “I shouldn’t have slipped her that ant poison. I should’ve just batted her in the jaw sometimes.”

Unlike most bare-bones Warner Archives releases, The Big House comes with two impressive extras: the French and German versions of the film, shot simultaneously with the American version on the same sets, but with different casts (including Charles Boyer as Morgan in the French Big House). The overall strengths of the alternate versions are the same, coming down to the sense of place, the performances, and the colorful dialogue. But only the American one has Wallace Beery, whose Oscar-nominated performance as Butch is one of a kind in its mix of childlike naiveté and sociopathic manipulation.