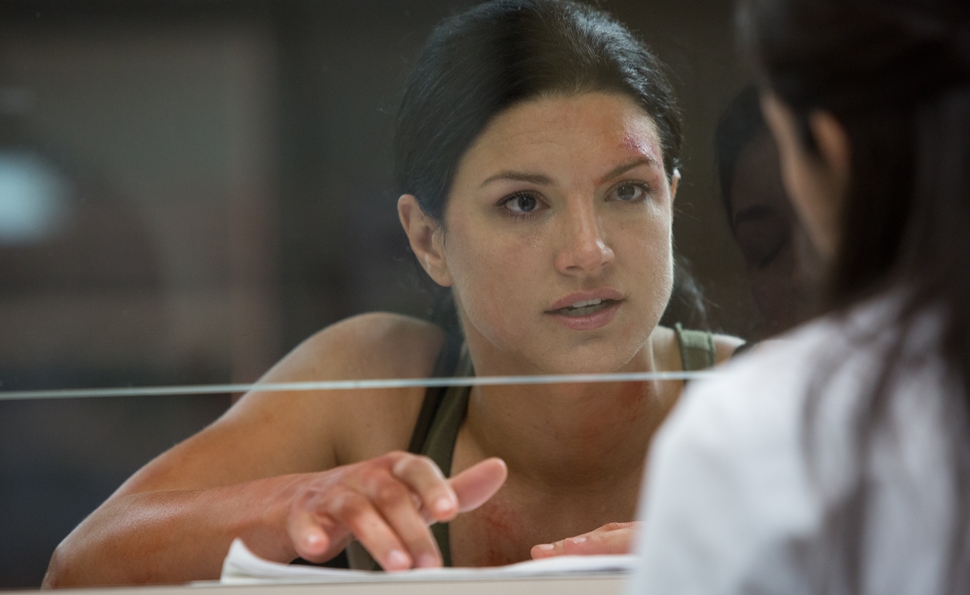 In 2011’s Haywire, Steven Soderbergh kept Gina Carano’s dialogue minimal, wisely outsourcing all dramatic functions to more experienced supporting players as his MMA-fighter star dashed from one action showcase to another. Audiences rejected the film’s impersonally thrilling kinetics, so it’s hard to blame the team behind Carano’s new starring vehicle, In The Blood, for placing some conventional characterization up top. The thinking seems to be that 15 minutes of rote backstory will make it easier for audiences to relate to her, but the efforts made in this direction are counterproductively pedestrian, padding that delays the main event.

At the start, Ava (Carano) has survived her father’s murder and defeated a heroin addiction; her troubled past and fighting skills make it a sure bet that her marriage to moneyed pretty boy Derek (Cam Gigandet) will attract more trouble rather than serving as a peaceful new beginning. After a tedious Caribbean honeymoon montage—daytime fornication, jet-skiing, lots of giggling—Carano’s husband falls to the ground in a zip-lining accident. The ambulance carrying him to the hospital disappears, and local law-enforcement Chief Ramón Garza (Luis Guzmán) believes Ava killed Derek for his money. Failing to get any support from the police, Carano finally has license, some 45 minutes into the movie, to start running, jumping, and fighting her way up the villainous chain of command in an effort to reclaim her husband.

That attenuated buildup is a momentum-sapping problem: It forces Carano to act, which she does gamely but ineffectually. Unlike Soderbergh, director John Stockwell and screenwriters James Robert Johnston and Bennett Yellin don’t protect Carano from her own weaknesses. In motion, at least, Carano takes a Steven Seagal-esque relish in torturing information out of various Hispanics: Whether splitting a man’s head in two with a shovel or motivating someone to talk via repeated swirlies, she seems to enjoy her work. There’s minimal choreographed mayhem in the form of the MMA one-on-ones Carano is so adept at, although the final 20 minutes finally accumulate some momentum, as bullets start flying en masse.

Carano deserves better: She’s a formidable physical performer, and the current state of the MMA film on the DTV circuit is strong enough to shame this wan, drama-clogged effort. Scott Adkins, another fighter-turned-quasi-thespian, has been quietly churning out serviceable vehicles like Ninja: Shadow Of A Tear under the regular direction of Isaac Florentine, and their collaboration at least delivers the fighting goods between unavoidably leaden exposition sequences. Someone should do at least that much, and preferably more, for Carano.