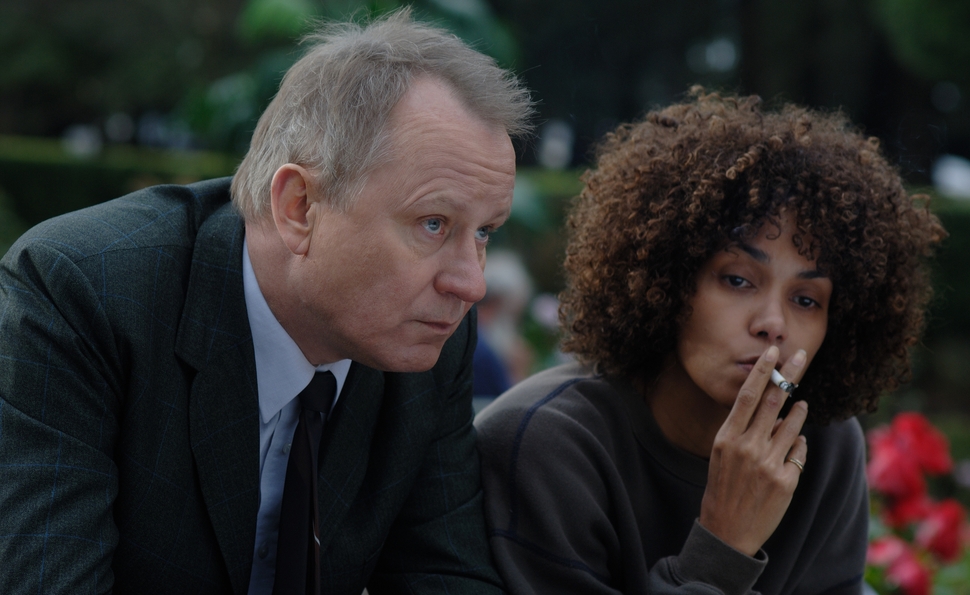 The psychological drama Frankie & Alice is in the awkward position of hitting national release a few years after earning its star, Halle Berry, a Best Actress Golden Globe nomination, the NAACP Image Award, a Prism Award, and a BET Best Actress nomination. But considering the nature of the role Berry plays in Frankie & Alice, as a stripper wrestling with dissociative identity disorder in the 1970s, anything short of an Oscar nomination had to be seen as a distinct failure. When an Academy Award-winning actor plays a woman with multiple personalities, it’s the Oscars or bust; while a Golden Globe nomination might ordinarily make a nifty consolation prize, it clearly wasn’t enough to get Frankie & Alice off the shelf and in front of audiences in 2011.

Dusted off a full five years after it finished filming, the film is now a strange, wounded beast that cries out for Academy validation with every histrionic frame, yet has already missed its window of opportunity. In the performance that did not win her an Oscar, Berry plays Frankie, a hard-living, street-smart exotic dancer who keeps being confronted by co-workers and strangers, enraged about behavior and incidents she doesn’t remember.

Frankie’s acting out eventually brings her to the attention of kindly psychiatrist Dr. Oz (Stellan Skarsgård), who listens to 8-tracks of Miles Davis to stimulate his active mind, talks eagerly of his many years as the subject of an LSD experiment, and seems to pride himself on being as eccentric as his patients. He ascertains that Frankie has dissociative identity disorder: Without warning, she lapses into the personality of Alice, a racist, sexist Blanche Du Bois type who behaves as if she’s perpetually loitering at community-theater auditions for a Tennessee Williams production, and broadcasts her contempt for the negro woman she feels cursed to have to share a body with. Then there’s Genius, a little-girl personality who functions as an ally in Frankie’s fierce struggle with Alice for control of mind, body, and soul.

Frankie & Alice takes the form of a mystery. Each heavy-breathing scene of doctor/patient interaction and over-lit, gothically stylized flashback brings Frankie and Oz closer to uncovering the formative trauma that fractured Frankie’s mind. In theme and structure, Frankie & Alice bears a strange resemblance to Lars von Trier’s new Nymphomaniac, which also involves a troubled, brazenly sexual woman unburdening herself to a scholarly old man played by Stellan Skarsgård. On one level, Skarsgård’s characters in these films are contemplating the enigma and complications of very specific women, but on another, he’s wrestling with the mystery of womanhood as a whole.

Frankie & Alice reduces that vast, fruitful subject to a simple search for a deep psychic hurt. The film begins at a fever pitch and stays there throughout, growing particularly hyperbolic during the flashbacks, which aspire to Douglas Sirk’s operatic bigness, but instead make a campy, kitschy hash of the ugliest recesses of America’s racial history.

Great actors understand that there are moments throughout every performance when acting has to give way to just living onscreen. In Frankie & Alice, Berry never stops acting for a moment; she’s always on. This may be partially attributable to her character alternating between theatrical personas, but the effect is exhausting for viewers as well as the star. Berry is the antithesis of an effortless performer, and she works up a sweat in a turn that too often feels like a bad one-woman show, or an audiobook where the reader gives every character a cartoonish accent to ensure that listeners can tell them apart. Frankie & Alice serves a performance distinguished by quantity rather than quality; Berry offers a three-for-one deal here. Frankie & Alice gives her the rare opportunity to play a film’s hero and its villain inside the same body, and she does a memorably dreadful job in both capacities. That trainwreck fascination is about the only redeeming facet of a prestige picture gone terribly, though not entertainingly, awry.