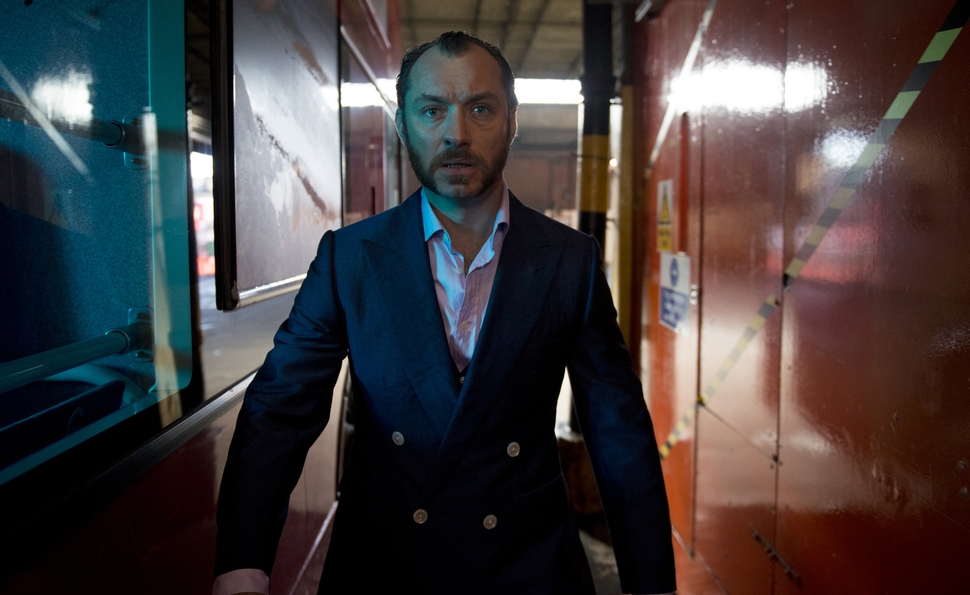 Though Jude Law’s star was already on the rise before 1999’s The Talented Mr. Ripley—he had played Oscar Wilde’s lover to acclaim in the 1997 biopic Wilde, and had significant roles in Gattaca and Midnight In The Garden Of Good And Evil—his performance as Ripley’s Dickie Greenleaf, a lithe and charming playboy cavorting through Italy, defined his image going forward. He could be slippery and deceptive, but the effeteness has stayed with him role after role; any harm he could do, rest assured, would not be physical in nature. His first appearance in Dom Hemingway chases that image away: Sporting the bulked-out, tattooed prison body of Robert De Niro in Cape Fear and muttonchops somewhere between Wolverine and Ambrose Burnside, Law’s new look would be startling enough even without the colorful monologue about his “exquisite cock.” This is not Dickie Greenleaf. This is just Dick.

Writer-director Richard Shepard has pulled this off before: In his underrated 2005 black comedy The Matador, he transformed Pierce Brosnan from James Bond suave to a pathetic, long-in-the-tooth assassin being put out to pasture. Shepard’s image de-habilitation on Law smacks of gimmickry—and the world has no immediate need for another vulgar British crime picture—but the actor seems invigorated by the change, and the film matches his robustness to a fault. It’s a thoroughly obnoxious piece of work that’s nonetheless winning in its boorishness, which is precisely the tone Law is trying to strike as a parolee who believes, with good reason, that he’s owed a piece of the action. And he’s going to stomp around like a beet-faced child until he gets it.

Not long after his release from prison on a 12-year robbery stint, Dom (Law) immediately goes looking for compensation for his silence. Joined by his partner-in-crime Dickie (Richard E. Grant, wonderfully aghast as ever), Dom drives out to an estate in the South of France owned by Russian mob boss Mr. Fontaine (Demián Bichir), who’s happy enough to indulge him some hookers and blow. There’s really no amount of money or pleasure that can satisfy Dom—though Mr. Fontaine’s moll (Mădălina Diana Ghenea), the femme fatale of his scenario, would be a start. An accident shifts the action back to Dom’s old territory in London, where thoughts of reform are triggered by a desire to reconnect with his estranged, now-grown daughter (Emilia Clarke).

There are two sides to Dom: The rampaging thug on a mission to rob, intimidate, or beat anyone who stands between him and his righteous spoils, and the secretly soulful, reformed father who’s looking to his daughter for redemption. The Jekyll/Hyde dichotomy to Law’s performance neatly defines the dichotomy of the film itself, which excels when Dom is at his most foul and goes mawkish when he softens up a bit. Naturally, then, the best scenes in Dom Hemingway are front-loaded to the first half, when Dom is in full rampage mode, particularly a brilliant sequence when he confidently asserts he can rob a digital safe in under 10 minutes and proceeds to do the ultimate smash-and-grab job. Given that Dom really does have justice on his side—at least in the sense that he abides by a code other crooks treat cavalierly—it’s a shame that Shepard ever felt the need to humanize him more than necessary. After Law worked so hard to shed his old image and flap around with ’roid-rage garishness, the film tries to jam him back into the cocoon.