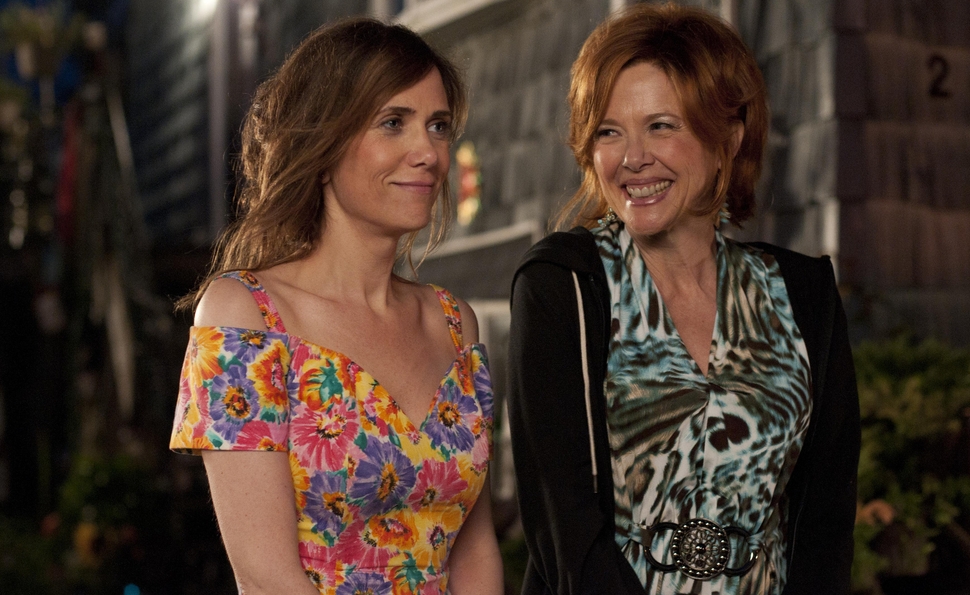 Though Kristen Wiig appeared in small roles here and there during her seven-year run on Saturday Night Live, she’s only recently shifted into playing three-dimensional characters, most notably co-writing her own ticket in the hit comedy Bridesmaids. Seeing her isolated a little in Girl Most Likely, away from Bridesmaids’ balanced comic ensemble, exposes her as an odd, unnatural screen presence—offbeat in her best moments, eerily remote in her worst. In Girl Most Likely, as in Bridesmaids, Wiig’s character, Imogene, suffers more humiliation than a Lars von Trier heroine, but it’s almost entirely self-inflicted and passive, as if she’s carelessly stepped into quicksand, and is slowly sinking deeper and deeper into the muck. Her voice sinks along with her, almost to a whisper, and the words that do come out whiff of sarcasm and sour defeat. Then it’s on to the next disaster.

Previously titled Imogene, and now released under the utterly meaningless banner of Girl Most Likely, Wiig’s new comedy sulks limply along with her, unable to bring the kind of energy that might complement her tendency to underplay every scene. Directors Shari Springer Berman and Robert Pulcini, who directed the clever Harvey Pekar biopic American Splendor in better days, cast Wiig as an abashed New Yorker who retreats home to the boardwalk tackiness of Ocean City, New Jersey. But placing Imogene at the center of a maelstrom of quirky activity makes her seem less human, not more, because the film so readily departs from real, recognizable behavior. How can her problems be taken seriously when her brother is thumping about in a homemade fiberglass mollusk shell?

After an irritatingly cutesy prologue that shows Imogene as an opinionated theater kid, questioning why Dorothy would ever want to go home in The Wizard Of Oz, Girl Most Likely finds her as an adult with far less confidence in herself. Her career as a playwright has gone nowhere, she loses a job writing theater blurbs for a magazine, and her smarmy boyfriend casually announces that he’s found a new place to live. In a silly piece of plotting, Imogene fakes a suicide attempt to win back her boyfriend, winds up committed to a hospital, and gets released to her estranged mother Zelda (Annette Bening), who promptly heads off to scratch a gambling itch, leaving Imogene sedated in a casino parking lot. (Imogene wandering the casino floor in a hospital gown is more a humiliation baseline for her, rather than her lowest moment.) Her ill fortune continues when she discovers Zelda has rented out her room to Lee (Darren Criss), a handsome young Backstreet Boys impersonator. Zelda is also shacking up with a doofus (Matt Dillon) who claims to be a CIA officer named “George Bouche.” Imogene’s only reliable ally is her weird, phobic brother Ralph, a crab-obsessed inventor who has never left New Jersey.

Between the mollusk exoskeleton, the nunchuck-slinging/dragon-robe-wearing CIA boyfriend, and a chesty boardwalk glitter-applicator played by Natasha Lyonne, Girl Most Likely has no shortage of zany elements in the mix, but gets nothing out of them. (Unless the metaphor of a shielding yet restricting exoskeleton counts for something.) On the few occasions when Berman and Pulcini play it absolutely straight, like when Imogene and Lee spend a night in New York together, or the camera takes in the authentic cheese of boardwalk culture, the film feels more relaxed and agreeable, as does its star. But the film’s interest in seeing Imogene put her life back together ultimately takes a backseat to a finale that forces all its most strained eccentricities to collide in one room. It’s no fun rubbernecking that twisted wreckage.