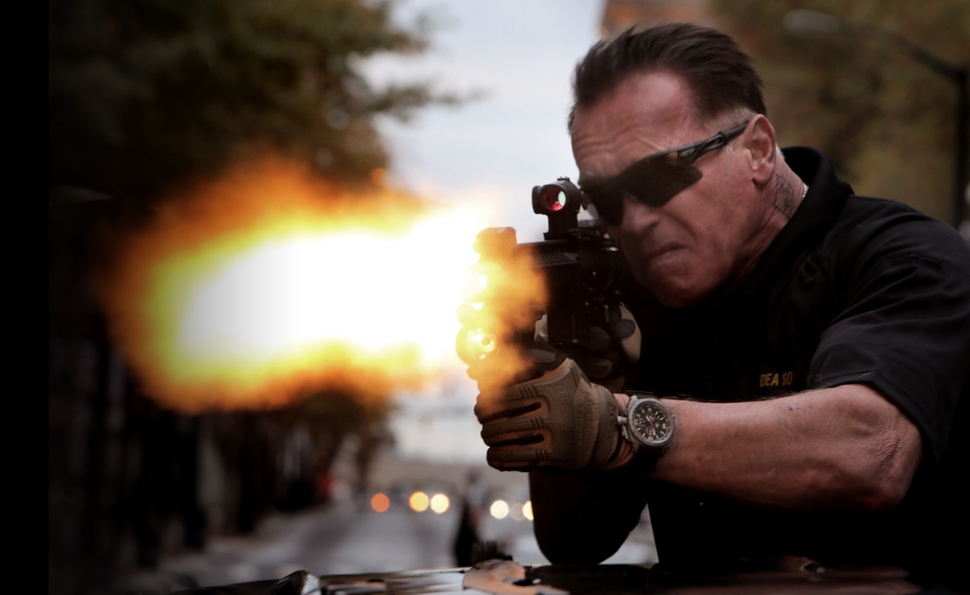 Just before leaving Hollywood and the movies for Sacramento and the California governorship, Arnold Schwarzenegger entered the most interesting and least successful phase of his career. Whether it was a reaction to his heart-valve replacement surgery in 1997, or to a series of marital indiscretions that didn’t come to light until years later, or a sheer coincidence, Schwarzenegger suddenly began taking roles as flawed, broken men after almost two decades of playing unstoppable killers. In movies like End Of Days, Collateral Damage, and even the campy Batman & Robin, Schwarzenegger’s characters were husbands who failed their families and lost their way. They were wracked by guilt and haunted by death. Schwarzenegger went from playing the Terminator to playing the terminally depressed.

The Governator kicked off his recent acting comeback with a series of films that leaned heavily on nostalgia for his larger-than-life, wise-cracking superman persona from the 1980s: The Last Stand, The Expendables 2, and Escape Plan. With Sabotage, he returns to the darker territory of his pre-retirement period. The film’s plot is a variation on Agatha Christie’s Ten Little Indians, set in an elite DEA unit. But the subtext is all about personal guilt, and a former family man who’s now smoking his signature stogies alone.

Schwarzenegger’s John “Breacher” Wharton has plenty of time on his hands to contemplate his mistakes; after $10 million in drug money goes missing during his unit’s raid on a Mexican cartel compound, Wharton and his team of poorly behaved, highly effective, heavily tattooed, and mostly bearded agents—Sam Worthington, Joe Manganiello, Terrence Howard, Max Martini, Josh Holloway, and Mireille Enos—are stripped of their guns and badges and assigned to desk jobs. After months under heavy surveillance, they’re finally cleared and ordered to return to duty. But once Wharton gets his crew back to work, its members start turning up dead. Is the cartel hunting them for revenge? Or is one of their own a traitor?

Co-writer and director David Ayer asks the questions, but seems less invested in their answers—which range from muddy to totally incoherent—than in using the scenario as an excuse to explore the dark side of the war on drugs and the psychological toll it takes on the men and women who fight it. Sabotage’s mystery component is mostly dead on arrival, and poor Olivia Williams has the thankless job of carrying it as the no-nonsense detective searching for the killer. But as Ayer proved with his previous film, End Of Watch, he has a natural eye and ear for the ecosystem of law enforcement: the inside jokes, the curious rituals, the salty language, the macho camaraderie. The film’s detective work is largely rote, but the moments between the detective work, when the cops tease one another about sleeping with one of their suspects, or having to take a leak in the middle of a stakeout, are lively and sharp. Even as the film twists and turns in ludicrous yet obvious ways, its world is always compelling and authentic.

That gritty credibility extends to Sabotage’s violence, which is surprisingly gory. There are several graphic head shots, and extended torture and autopsy sequences. But Ayer also revels in the visceral excitement of the drug war even as he lingers on its gruesome aftermath; Sabotage has several elaborate (and technically solid) shootouts and chase sequences, and the movie vacillates between thrilling viewers with action and horrifying them with inhuman savagery. The juxtaposition may turn off some viewers; there isn’t enough pure escapism to satisfy genre fans, and too much gung-ho mayhem for a sober meditation on the issues at hand. Either way, none of the characters on Schwarzenegger’s team are likable. They drink and swear, and when they aren’t fighting mercenaries or drug kingpins, they’re fighting each other. Watching this movie sometimes feels like being trapped on a long car ride with the most aggressive, obnoxious frat dudes on the planet.

The results are deliberately off-putting, a nasty film about mean people doing horrible things. That’s surely by design. Ayer is trying to paint a broad portrait of the poisonous effect this never-ending conflict has on its combatants, and to make a movie that mirrors its protagonists’ fractured psyches. Like Wharton’s DEA unit, Sabotage gets off on the adrenaline rush of badass brutality—but feels traumatized by its aftermath.

That jibes perfectly with late-career Schwarzenegger’s onscreen persona, the man overwhelmed with grief and regret. Action heroes have rarely killed more people onscreen than Ahnuld—or done so while completely dismissing the emotional weight of those killings by delivering shamelessly goofy puns while committing murder. But as viewers slowly realize over the course of the film, John Wharton has witnessed the effect of violence first-hand, and it’s scarred him. That almost makes Sabotage Schwarzenegger’s (much less effective) version of Clint Eastwood’s Unforgiven—his chance to wrestle with all the death he’s perpetrated onscreen, and to consider, once and for all in his twilight years, whether it was really worth it. The film’s final scene—one of the most fascinating of Schwarzenegger’s entire career—makes the Eastwood comparison even more overt, turning Wharton into something of a Western cowboy.

After Schwarzenegger abandoned his film career for politics, skeptics wondered why he would then abandon politics for more action movies, particularly as a man well into his 60s. Sabotage’s last sequence offers an answer. Schwarzenegger is older, and he may not be as impervious to pain as he used to seem. He certainly has more films behind him than ahead of him, and he’s made his fair share of professional and personal mistakes along the way. But if he’s going out, he’s going down shooting—with a big, fat stogie in his mouth.