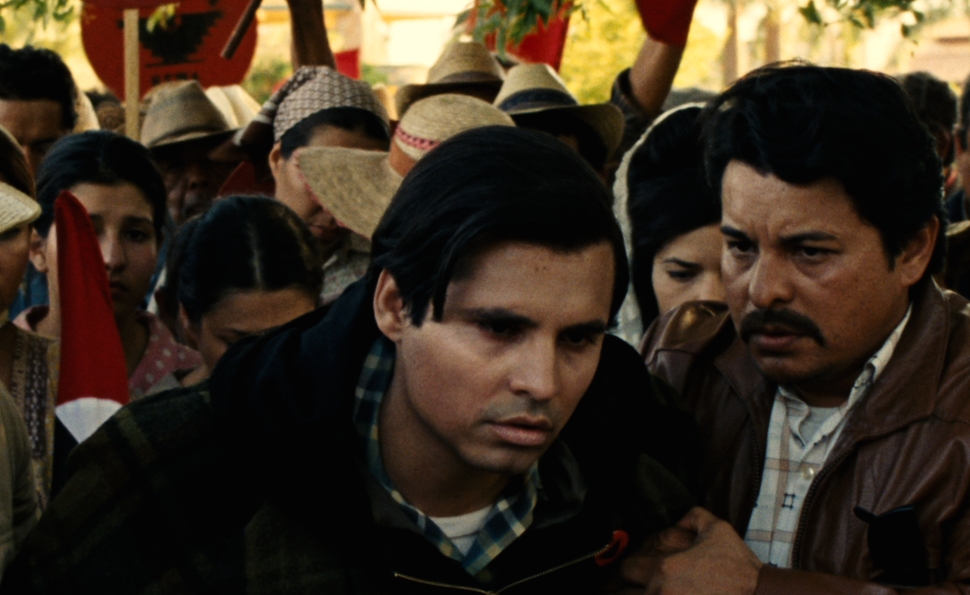 A biopic of Cesar Chavez could go by many titles, from the breathless and hyperbolic (Cesar Chavez: Strike For Justice!) to the irreverent (The Grape Crusade Of Cesar Chavez). Yet the people behind Cesar Chavez ultimately went with the plainest, most obvious choice, a title that lays out the film’s subject as artlessly and directly as possible. That strategy extends to the rest of the film, which is just as unadorned and basic as its title.

The always-dependable Michael Peña lends a quiet certainty to the title role of a committed activist and union true believer who sets out to unionize farm workers in California in the 1960s. Chavez faces strong resistance from growers out to protect their financial interests by any means necessary, and workers concerned that joining a union or threatening to strike could destroy their already-perilous livelihoods.

With the help of his wife Helen (America Ferrera) and his partner Dolores Huerta (Rosario Dawson), Chavez launches a multi-tiered strike against table-grape growers that specifically targets a company owned by Bogdanovitch (John Malkovich), a Croatian-born grape mogul. Cesar Chavez reduces many of the complicated issues at its core to clear-cut matters of good and evil, sinister grape companies and righteous workers, but Malkovich lends an compelling element of ambiguity to the film. He’s an immigrant like the workers he’s out to control, and his racism takes the form of avuncular condescension and a strong belief that he’s better suited to look after his workers’ best interests.

Cesar Chavez depicts a man driven by intense religious faith and belief in social justice. For Chavez, fighting for the rights and dignity of the working poor was a matter of religious conviction; Luna’s Chavez strikes an unmistakably Christ-like pose when he embarks on an epic hunger strike for unity and non-violence within his supporters that nearly kills him. But where Chavez was a man of intense, overriding passions, his biopic feels strangely academic and detached, an unimaginative, straightforward catalog of his greatest hits and most historic campaigns that provides precious little insight into his inner life.

Luna attempts to humanize his subject by illustrating the price activism and dogged, selfless pursuit of social justice exacted on his family. If anything, however, the film treats Chavez’s family as even more of an afterthought than their father does. That isn’t Peña’s fault, or Ferrara’s; she’s fine in an underwritten role. Chavez understandably focused on the work that made him an enduring icon of his cause at the expense of his obligations to his family, but Cesar Chavez seems to forget for long stretches of time that its subject even had a family, and tends to only haul them out when the narrative arc demands it. A late attempt to posit Chavez’s contributions to the labor movement as his tribute to a son he never had time for is undoubtedly well-intentioned, like everything else in the movie, but feels simplistic and calculating, a cheap attempt to wrap a neat little bow around a messy relationship the film doesn’t have much time for either.

Like so many do-gooder biopics, César Chavez seems destined for a second life as a cinematic cheat sheet for lazy high-school and college students, since it’s considerably less time- and labor-intensive than actually reading a biography. Cesar Chavez fulfills that role dutifully and honorably, but without much distinction. The film seems more intent on educating and inspiring than entertaining. The end credits might as well contain study questions.