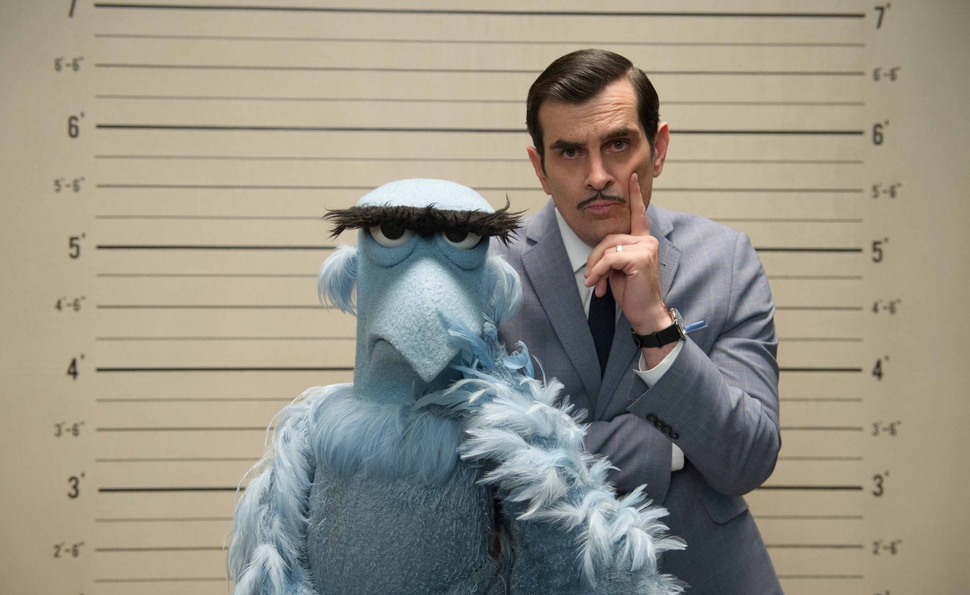 The 2011 film The Muppets had a task as simple as its title: reintroducing Jim Henson’s beloved creations to moviegoers, including a generation with a vague-at-best notion of the characters. The film has its missteps— particularly the amount of time its characters spent lamenting their faded popularity, rather than showing what made them popular in the first place—but it got the job done via a tuneful, heartfelt let’s-put-on-a-show story. The Muppets easily answered the question of whether the Muppets could still be entertaining, but in answering, it raised another issue: What should they do for an encore?

Beginning seconds after the last film ends, Muppets Most Wanted doesn’t waste any time addressing that question, even though the characters don’t seem to have a decent answer. Helmed, like The Muppets, by Flight Of The Conchords director James Bobin, the films opens with  “We’re Doing A Sequel,” the first of several witty numbers by Conchords’ Bret Mackenzie. (Mackenzie also wrote the songs for The Muppets. From that film’s key behind-the-scenes creative team, only co-writer/star Jason Segel didn’t return for the sequel.) The clever lyrics address the perils of making a follow-up, from repetition to diminishing creative returns. Yet while Muppets Most Wanted doesn’t avoid all those pitfalls—or any of them, really—they don’t undo it, either. As the song puts it, it’s the Muppets again, this time in a just-pretty-good Muppet caper, but that isn’t such a bad thing.

Here, the action gets kicked into motion by Dominic Badguy (“Badg-ee,” as he insists it’s pronounced in French), a thief posing as an unctuous showbiz professional who talks the Muppets into embarking on a world tour to cement their comeback. Unbeknownst to them, Badguy is the partner of Constantine (performed by Matt Vogel), the “World’s Most Dangerous Frog,” and a dead ringer for Kermit (performed by Steve Whitmire). After a run-in in a foggy Berlin alley, Constantine takes Kermit’s place, while Kermit is shipped to Constantine’s old home: a gulag prison overseen by imperious warden Nadya (Tina Fey). Elsewhere, an Interpol-agent/collection of French clichés (Ty Burrell) teams with a CIA agent played by Sam The Eagle (Eric Jacobson) to get to the bottom of a series of daring thefts taking place wherever the Muppets play. Meanwhile, Miss Piggy (Jacobson) adjusts to “Kermit”’s odd hot-and-cold behavior toward her, and expresses her confusion via the Céline Dion-assisted song “Something So Right.”

Bobin treats those elements more as framework than plot, and the film doesn’t move from one story point to the next, so much as it acts like a revue, switching from location to location and cameo-rich musical number to cameo-rich musical number. In many ways, that plays to the Muppets’ strengths, giving supporting moments to character from Fozzie to returning man-muppet Walter to Dr. Teeth And The Electric Mayhem, and packing the script with witty one-liners, self-deprecating humor, and enough emotional shading that they feel more like characters than puppets. In other words, the film resembles a blown-up episode of The Muppet Show, which is just as well, since whenever Bobin breaks from that format—as in a borderline disastrous early fight scene between Kermit and Constantine—the movie breaks down.

Like its immediate predecessor, Muppets Most Wanted has one tremendous advantage, even when it missteps: Muppets. Even speaking in not-quite-what-they-used-to-be voices, the characters feel true to Henson’s original vision for them, and Stoller and Bobin’s script delights in bringing them to life again. While this sequel doesn’t entirely know how to tell a story with them—as that opening number warns from the start—they remain pleasant company, even starring in a movie that’s this content to warm up what’s worked before.

Muppets Most Wanted screens with the new Pixar short “Party Central,” a clever appendix that finds the Monsters University characters stealing a party from under the noses of a more popular rival frat. It’s short and minor, but an entertaining, typically detail-packed Pixar effort that, like the feature, leans heavily on what’s worked in the past rather than trying anything new.