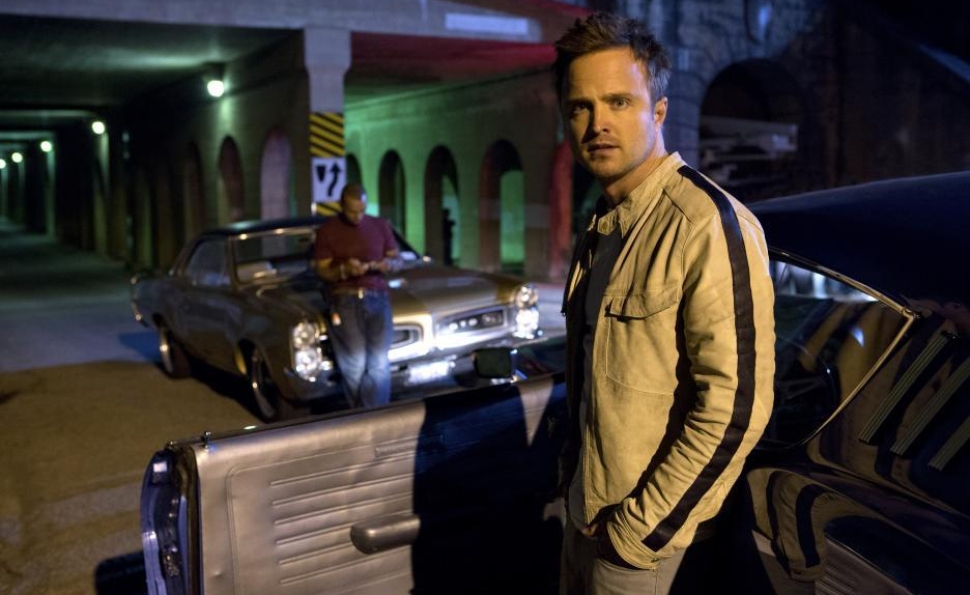 For a film that centers on a 45-hour cross-country dash to gain entrance in a high-stakes road race, Need For Speed takes its sweet time getting where it’s going. Inspired by one of the most successful videogame franchises of all time, the film is weighed down by what amounts to a seemingly endless introductory cutscene, as the film struggles to establish gravitas and emotional stakes for a film that has mindless, smash-’em-up mayhem programmed into its DNA. Once it stops resisting its natural inclination, however, Need For Speed becomes a worthy placeholder for the currently on-hold Fast & Furious franchise, and an appealingly pulpy outlaw-action flick in its own right.

A good portion of that appeal can be attributed to ever-likable star Aaron Paul, who brings the same vein of vulnerable badassery that made him famous on Breaking Bad to his character, Tobey Marshall, a small-town mechanic by day, preternaturally gifted drag-racer by night. In the hands of a less capable actor, Tobey would be as poorly rendered as the earliest iterations of the Need For Speed videogames, but Paul brings some much-needed credibility to a role that’s overflowing with manufactured conflict and internal pain. He even manages at one point to fall to his knees while screaming “Noooooooo!” and still keep his dignity mostly intact.

As the film begins, Tobey is dealing with his father’s recent death and trying to keep the family garage financially afloat, so he accepts an offer from his longtime rival, Dino Brewster (Dominic Cooper)—who also happens to be dating Tobey’s former flame—to finish tricking out a legendary custom Mustang, so Dino can sell it for a cool $2.7 mil to a wealthy aficionado. That deal is brokered by a beguiling young British motorphile named Julia Maddon (Imogen Poots), who’s drawn to Tobey’s sullen charm and lead foot. Following that victory, Dino goads Tobey into a street race that leaves Tobey’s young protégé dead in a fiery ball of twisted metal and Tobey in jail, while Dino walks away scott-free. Two years later, Tobey is out of the clink and looking for vengeance, and some much-needed capital to get the garage back up and running. The opportunity for both is presented in a legendary-yet-totally-secret high-stakes street race called the DeLeon, overseen by an eccentric former racer/current video-podcaster known as The Monarch, played with soul-patched abandon by a scenery-chewing Michael Keaton. All Tobey needs is a fast car that can get him from New York to California in 45 hours for the registration deadline. Re-enter that custom Mustang, with Julia along for the ride.

So, to recap, Tobey is driven by the desire to: a) save his father’s garage, b) prove his innocence, c) avenge his friend’s death, and d) show the racing world that his arch-nemesis is a total wang. That’s a surplus of motivation for a movie whose title and source material indicate an all-consuming desire to go really, really fast for the hell of it. Rather than taking the simple, dynamic body of a gearhead-Bonnie-and-Clyde yarn and running with it, Need For Speed modifies its outlaw antihero with all sorts of unnecessary pain and backstory, and the film is slow to leave the starting gate because of it. But once it does, Need For Speed becomes a much fleeter vehicle, powered by impressive practical stuntwork, eye-popping cross-country landscapes, and the sparking chemistry between Paul and Poots.

Adding to the film’s excess is Tobey’s pit-crew—played by Ramon Rodriguez, Rami Malek, and Scott Mescudi, a.k.a. rapper Kid Cudi—along for the ride to provide air support (one of the film’s overt nods to the videogames that inspired it), on-the-road backup, and shoehorned-in wackiness, much of which reeks of late-stage script punch-up. Given Paul’s established knack for comedy, it’s a little odd that he’s consigned to the role of humorless brooder in the midst of a goofy band of brothers, but given Need For Speed’s oft-shaky grasp of comedy, he’s probably better off in grip-it-and-rip-it mode.

The same can be said for the film, which is at its most viscerally entertaining when it’s channelling the pure adrenaline-rush of high-speed pursuit: Director Scott Waugh is a former stuntman and stunt coordinator, and his expertise shows in the finely tuned motor-action setpieces, which are light on CGI assistance and soundtracked by nothing but the roar of relentlessly gunning engines. These sequences power Need For Speed through its draggier stretches, which thankfully grow fewer and farther between as the film nears its DeLeon climax. Some of the early street-racing scenes are too close to civilization for comfort, their excitement not quite compensating for the cavalier attitude toward casual vehicular manslaughter its characters exhibit when racing through heavily populated areas. But such collateral damage is part and parcel of the action-movie/videogame milieu, and it becomes less egregious as the film moves west and into bigger, emptier, more photogenic vistas.

Those photogenic vistas, combined with the kineticism inherent in racing, should make Need For Speed a perfect match with 3-D, but the post-converted extra dimension adds little to the visuals, which are plenty lush and glossy without the added effect. Some speculated that the addition of the 3-D element—announced just a month before the film’s release—was intended to increase the film’s franchise potential, given Paul’s relatively low-wattage star power and the videogame series’ waning popularity. So it goes with Need For Speed as whole: There’s the solid body of a winning little underdog movie under all those franchise- and international-box-office-baiting add-ons. The film only manages to meet its full potential when it gets out in front of those heavy expectations.