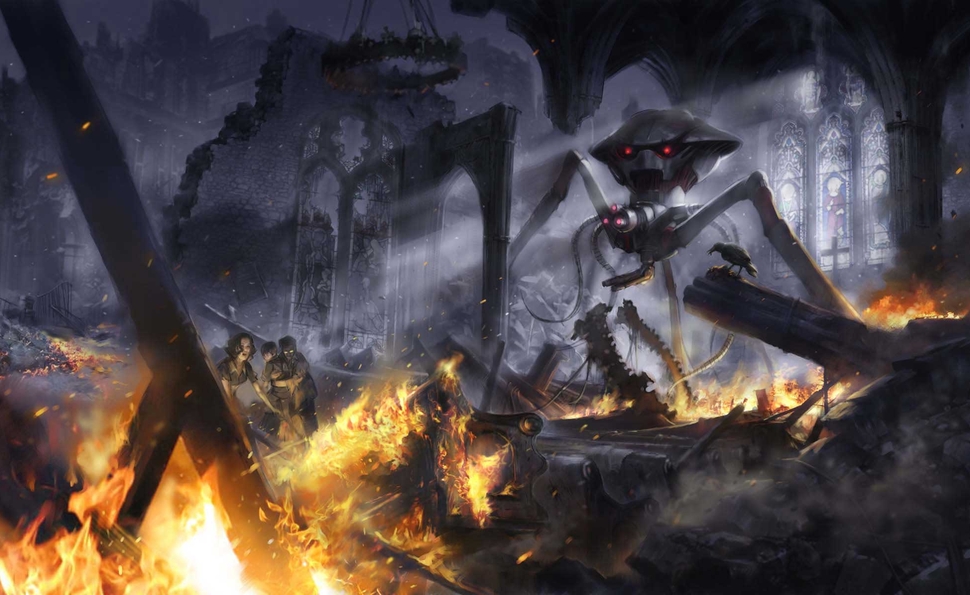 War Of The Worlds: Goliath

First serialized in 1897, H.G. Wells’ seminal science-fiction novel The War Of The Worlds has an irreducible pull that’s inspired adaptations by generations of magicians, from Orson Welles to George Pal to Steven Spielberg. Even after hundreds of alien-invasion follow-ups, and a decade of transmissions from Mars’ safely uninhabited surface, courtesy of NASA’s Opportunity and Curiosity rovers, Wells’ tale retains its power to spook skywatchers and germophobes alike.

Maybe it’s the terrifying mecha he dreamt up. Wells described his three-legged Martian war machine as “a walking engine of glittering metal, striding now across the heather; articulate ropes of steel dangling from it… Can you imagine a milking stool tilted and bowled violently along the ground? That was the impression those instant flashes gave. But instead of a milking stool imagine it a great body of machinery on a tripod stand.” Both The Matrix and Spielberg’s 2005 update of Wells’ tale as a grim post-9/11 blockbuster brought Wells’ tentacled craft to nightmarish life.

War Of The Worlds: Goliath—an animated sequel to the book, released in theaters in its native Malaysia in 2012—also does an admirable job of visualizing those squid-like tripods, as well as their clunkier, steam-powered manmade imitations. It smashes the squidbots up against the steambots (and the clamshell-like Martian flyers against heat-ray-equipped biplanes) in a handful of reasonably diverting battle sequences. Cleverly, the animators rattle the frame on the tripods’ exteriors to suggest the machines’ Earth-shaking mass. That’s pretty much the inventory of the film’s “plus” column.

Director Joe Pearson (who also has a mysterious “created by” credit) and screenwriter David Abramowitz have ginned up a fan-fiction-y premise that suggests much more apocalyptic fun than it ultimately delivers: It’s 1914, a decade and a half after microbes foiled the attempted Martian takeover of Earth chronicled in Wells’ novel. Humanity has spent the time upgrading its defenses based on technology reverse-engineered from captured Martian weapons and vehicles. When word reaches steampunk New York City of the assassination of Archduke Franz Ferdinand in Sarajevo, World War I as we knew it seems inevitable.

But! The impending arrival of a second Martian incursion—they’ve apparently brought flu masks and Purell this time, along with better ships and hotter heat-rays—inspires the soldiers of the multinational defense force ARES (for, uh, Armed… Resistance… aw, who cares?) to defy orders to return to their home countries and instead saddle up to beat back the Martians a second time. Or first time, actually. They’re so gung-ho that no one thinks to protest that christening the prized warbot “Goliath” seems like an awfully self-defeating move. Worse, it’s an “Achilles class” war machine, which raises the question of where the loyalties of ARES’ marketing and branding team truly lie. Will the Hindenburg and the Spruce Goose be providing air support?

All this unfolds during a brisk first act, complete with a Batman-style dead-parents origin flashback for English hero Captain Eric Wells. (Ha ha.) After that, though, the movie struggles to reconcile its promise of a grand science-fiction epic with its abrupt 85-minute running time. It doesn’t come close to matching the visceral thrill or world-building detail of animated pictures like Katsuhiro Otomo’s 1988 classic Akira, or live-action ones like Guillermo Del Toro’s loveably bonkers Pacific Rim—which has the war-is-hell gravitas of Das Boot compared to this. A retro-futurist Manhattan, with armored zeppelins floating above the monorail-linked Art Deco skyscrapers, should look amazing, if nothing else. But Pearson even skimps on the eye candy. There’s an absurdly low-stakes interplanetary war to fight, after all.

Perhaps it’s unfair to criticize a comparatively modest animated picture for a sin of which far more costly live-action blockbusters like Star Trek Into Darkness and Man Of Steel are also guilty. But after a skirmish in New Mexico, the picture climaxes, as these pictures apparently must, with a siege of New York City that’s as glib about its unseen but necessarily genocidal death toll as any Transformers movie, followed by an obligatory tee-up for a presumptive sequel.

Those films, like this one, were rated PG-13. Still, it’s unclear exactly who the target audience for WotWG is. Its main characters are British, Irish, American, Canadian, and Malaysian. There’s an odd, quickly dispatched subplot about the Irish solider being pressured by his brother to steal advanced weapons from ARES for the Irish Republican Army to use “to blow all Downing Street to hell!” One shellshocked warrior freaks out and empties his rifle into an already-dead Martian, then commits suicide via enemy tripod a minute later. A German soldier proclaims the heat of battle “Better than schnapps!” The camera cuts away after a randy female officer tells her dashing superior, “I WANT YOU.” This is all sort-of-adult stuff, but the characterization and vocal performances would probably feel facile even to a thoughtful 13-year-old.