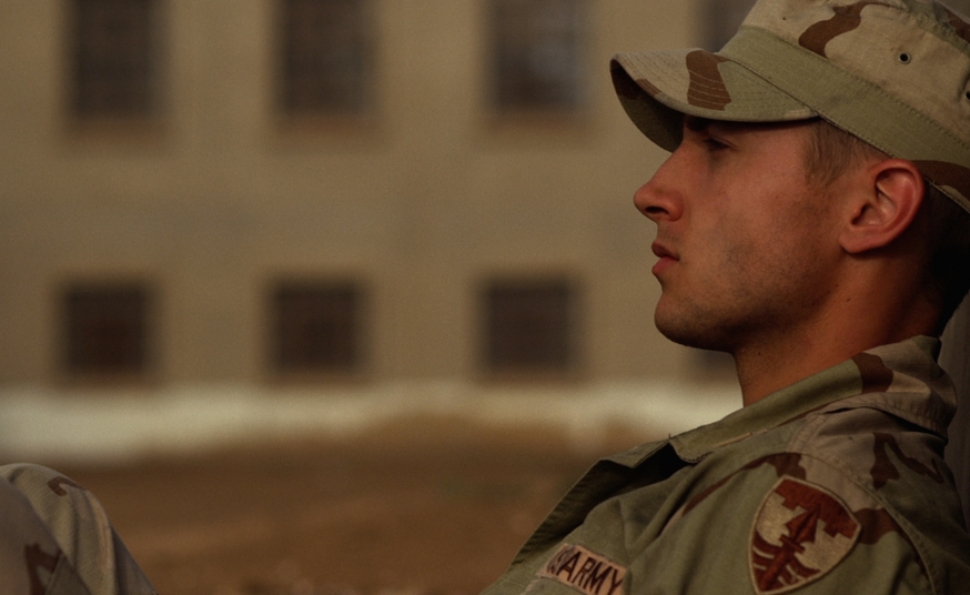 For a film about the hardened soldiers who oversaw the most notorious detainment center of the Iraq War, Boys Of Abu Ghraib is remarkably squeamish about tackling its subject matter head-on. There’s mild torture here, a brief glimpse of a camera there, but otherwise, the bulk of the movie could have been set in any military prison. Writer-director-star Luke Moran has his heart in the right place, and a clear compassion for soldiers thrust into impossible situations with no training, but he lacks the desire to steer his film in the honest direction this topic requires.

An opening monologue that uses the phrase “post-9/11 America” over some hard-rock thrashing, followed immediately by last-day-before-deployment Uncle Sam party hats and Fourth of July fireworks, sets the tone for a dramatic disillusionment arc that comes with few surprises. Moran plays Jack Farmer, a soldier shipping off to Abu Ghraib in 2003. There, he watches all his good intentions to help the war effort go up in smoke, once it becomes clear his unit will simply be prowling around the base. When he volunteers to patrol the cell block where the Army keeps the worst of the bunch, he bears witness to a small fraction of the actual abuses that took place in Saddam Hussein’s former prison.

It’s a plus that Boys Of Abu Ghraib lets its characters talk and act like real soldiers, complete with casual swearing, nonstop macho posturing, and a persistent restlessness that slowly infiltrates their minds and exerts itself on their faces. The boys of the film are strong actors, and though they don’t have much to do besides horse around, they do it well. The title should be a tip-off that Moran isn’t interested in the real-life Abu Ghraib prison guards (and personnel charged in the aftermath) who were women, which is a shame; a unit full of restless males carries a fundamentally different dynamic, and suggests their actions can be chalked up to a case of excess testosterone. (Sean Astin, appearing in a couple of scenes as a nasty guard, exemplifies this.)

When Jack heads to the cells, the two most blatant problems with Moran’s narrative surface. The first is the fact that, even allowing for the flexibility of “inspired by a true story,” he handles the truth with kid gloves and defeats the purpose of the setting. Moran reenacts some of the poses captured in the infamous photographs, but mostly his idea of horrific conditions involves multiple scenes of heavy metal and human shit. He does show a detainee death, but deflects the question of whether any such deaths occurred at officers’ hands. Kathryn Bigelow’s Zero Dark Thirty had its own set of narrative problems, but to her credit, Bigelow accepted from the get-go that she wasn’t going to work around reality’s grisly details when it came to detainee torture. It’s understandable why Moran might have wanted to avoid leering over reprehensible images, but in context, it seems worse simply to pretend that throwing poop was as reprehensible as things got.

Still, even the world’s softest depiction of Abu Ghraib could make honest appeals to human emotions, and here again, Moran slips. He turns the screw of Jack’s feelings about the prison on the question of whether a detainee he’s befriended (Omid Abtahi) is innocent, as though this would solve everything. Suppose everyone held in Abu Ghraib was a murderer. (Not the case, though many were.) Does that justify the military’s actions there? By focusing so much on a guilt/innocence dynamic, Moran cheapens the emotional truth of one of the Iraq War’s darkest moments.

An excellent documentary called The Kill Team will be seeing a small release this spring. In it, members of the group of U.S. soldiers charged with murdering Afghan civilians in 2010 speak frankly and movingly about the violent psychology of their unit, the mental imprisonment that comes with reporting to a terrifying superior officer, and the ways acts of abuse and aggression can morph into status symbols in a war zone. In a way, it picks up right after the legitimately great final scene in Boys Of Abu Ghraib, once Jack has returned home and—mild spoiler—is suddenly confronted with public knowledge of his actions. This is the moment that stretches beyond the deeds themselves, passing through to intense introspection and moral outrage. But when Boys reaches this juncture, it smash-cuts to the end credits and a laughably vague dedication: “For all the victims of war.” The Kill Team is about a completely different military abuse story, yet it’s a better film about Abu Ghraib than this one.