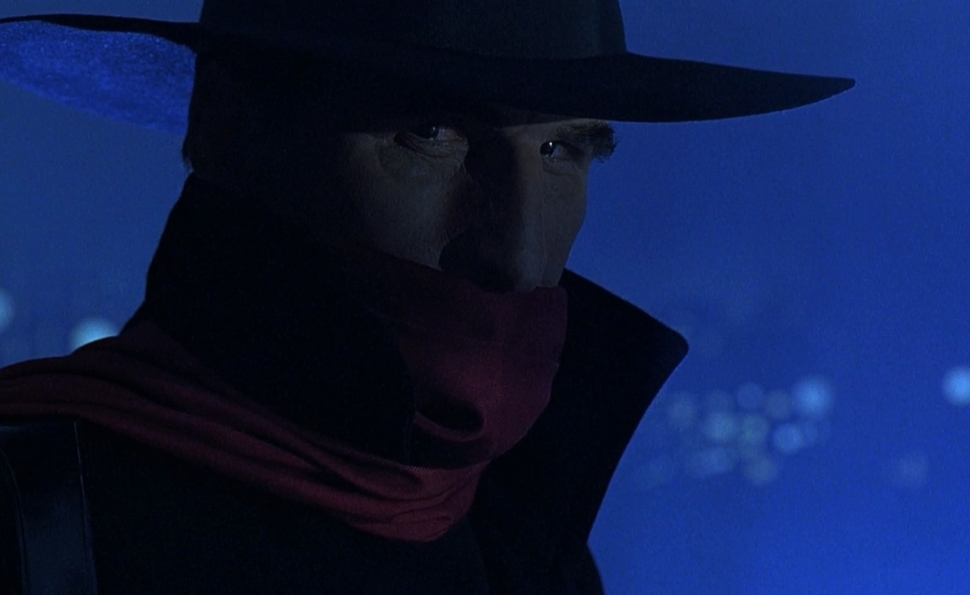 With a secret identity as a wealthy playboy, and a striking black costume and cloak, pulp detective the Shadow helped inspire the look and style of many of the comic-book heroes who followed him, including DC Comics’ Batman. Decades later, the Caped Crusader returned the favor when his 1989 film became an enormous blockbuster, kicking off a wave of comic-book-movie imitators—including 1994’s The Shadow, which borrowed liberally from the art-deco look and moody style of Tim Burton’s big-screen interpretation of the Dark Knight. As a result, this Shadow exists in a strange position: It’s derivative of the very work it influenced.

After an opening-credits sequence that doubles as a stylized tour of the hero’s logo (one of many direct lifts from Burton’s Batman), it’s off to the opium fields of Tibet to meet Alec Baldwin’s Lamont Cranston, currently employed as a sadistic drug warlord. At a meeting with a Tibetan mystic, Cranston is informed that he must reject his villainous ways and become an agent of good. After a losing battle with a magical, sentient knife, he reluctantly agrees.

Rather than dwelling on the unusual story of an evil man’s quest for redemption, and the process by which he learned how to turn invisible, cloud men’s minds, and hide his true identity by reshaping his face so he can look more like William Baldwin, the film elides Cranston’s rehabilitation and training completely, in favor of a more traditional (read: Batman-like) superhero narrative. A title card skips the action ahead seven years, and finds Cranston settled in 1930s Manhattan, operating as the city’s secret protector. Masking his true motives beneath the vacuous exterior of a rich socialite (he always shows up late to dinner with his police-chief uncle, played by Jonathan Winters), Cranston operates at the head of a vast network of operatives, investigating crimes and doling out his own brand of hard justice with a pair of nickel-plated semi-automatic pistols.

His newest target is Shiwan Khan (John Lone), the self-proclaimed last descendant of Genghis Khan. (By most historians’ calculations, Shiwan is only off by approximately 15,999,999 people.) Another student of the same Tibetan mystic that gave Cranston his powers, albeit one who didn’t take the lessons about reforming his wicked ways so closely to heart, Khan is determined to finish his ancestor’s work and conquer the world, which for some inexplicable reason involves detonating a nuclear bomb in New York City.

The Shadow’s whole modus operandi is deception and subterfuge, so a certain amount of audience misdirection in a film about him is expected, and even welcome. In the modern age of superhero films, where characters are rebooted endlessly in order to retell their origin stories over and over, there’s something refreshing about the idea of not dwelling on one of these characters’ backstories. But director Russell Mulcahy doesn’t just play his cards close to his vest, he never even unseals the deck. He doesn’t reveal how Cranston got to Tibet, or what he was doing before that, or how he came to be such a nasty character, or whether it’s now difficult for him to resist his wicked impulses. His and Khan’s mind-controlling powers (which occasionally also include telekinesis, but not always) aren’t well-defined, which makes their fights feel like chess matches in which the pieces can move anywhere at any time for any reason.

The movie is far more interested in the Shadow’s gadgets and methods than in the man himself. Whole sequences are devoted to establishing the mechanics of his network (one visually inventive sequence follows a message across the entire city, via pneumatic tube), while almost no time is spent establishing the mechanics of his mind. Cranston is a do-gooder who spent years in Asia operating as a heroin kingpin. Now he fights crime as a living cloud, attacking and sometimes even killing the same sort of men he once was. How does that make him feel? Apart from including one freaky dream where Baldwin rips off his own face and finds Khan’s underneath, Mulcahy never asks. In this iteration, Cranston is as much the Cipher as the Shadow.

Despite his underwritten part, Baldwin makes an effective pulp hero, looking rakish in the Shadow’s bright red scarf and upturned collar, and delivering his dialogue in a rich, sonorous voice worthy of the radio’s most famous Shadow, Orson Welles. (In an amusing homage to Welles, the film’s finale takes place in a hall of mirrors, à la The Lady From Shanghai.) The screenplay by Jurassic Park’s David Koepp keeps shoving incongruously broad comedy beats into its dark, atmospheric mystery, but even when he’s forced to crack wise (“It’s all falling into place for me now!” Cranston quips, as unbeknownst to him, a man falls to his death in the background), Baldwin’s eyes flicker with madness and menace. He even strikes up a nice bit of chemistry with his girl Friday, Margot Lane (Penelope Ann Miller, wearing the hell out of her period costumes), when the plot pauses long enough to develop their relationship.

The Shadow boasts a couple of action setpieces to rival the best of the period (Cranston’s death-defying escape from drowning inside a water-logged laboratory is a particular highlight), and the occasionally hokey special effects work for a character born from pulps and serials. But it’s not surprising that the film didn’t connect with audiences the same way Burton’s Batman did; its plot is too full of holes, and its aesthetic feels too familiar. The Shadow was one of the original pulp heroes, but his movie is more copycat than pioneer.

Apart from the trailer and about a hundred production photos, the only feature on the disc is “Looking Back At The Shadow,” a 23-minute assemblage of new interviews with Mulcahy, Koepp, Baldwin, Miller, cinematographer Stephen Burum, production designer Joseph C. Nemec III, and others. It’s mostly making-of boilerplate, but Baldwin at no point credits Mulcahy’s contributions to the film, nodding instead to Koepp, who at the time was a red-hot Hollywood screenwriter in the middle of penning five movies in two years, including Jurassic Park. Though others give Mulcahy a mention, Koepp’s name comes up so frequently, it’s as if he directed the film, too.