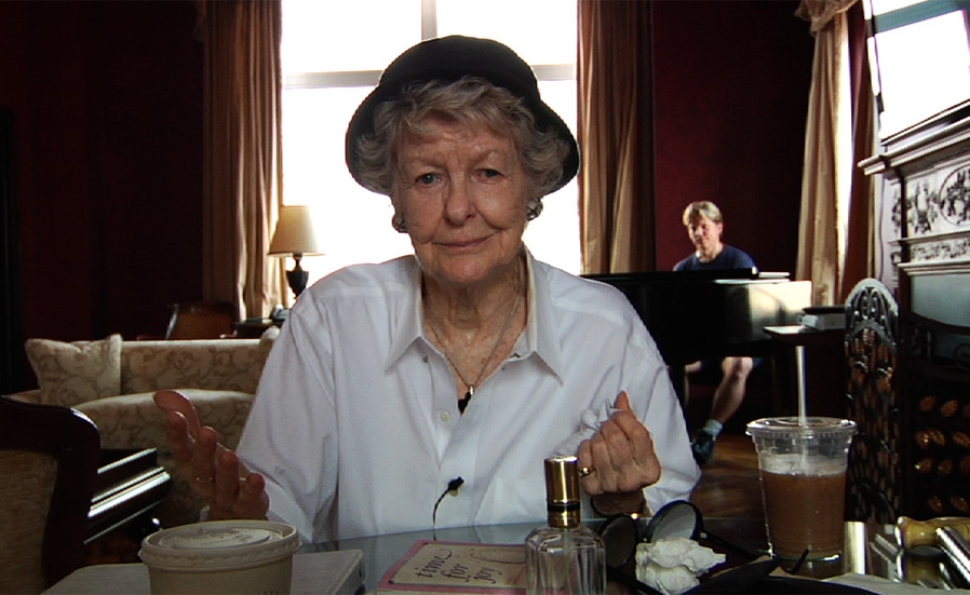 Elaine Stritch: Shoot Me could have been nothing more than a fawning, one-dimensional tribute to one of the most beloved ball-busters in show-business history. And initially, that’s exactly what it seems like it might turn out to be. In the opening moments of this intimate, surprisingly moving documentary, the camera follows Stritch—the nearly 90-year-old grande dame of Broadway, film, and television, whose bluntness is nearly unmatched—as she walks the streets of Manhattan, bumping into fans and friends at seemingly every intersection. “You’re still the best,” one woman gushes. “Thank you,” Stritch says, then waits a beat. “Still, eh?”

And when she runs into Ramona Mallory—with whom she co-starred in a recent revival of Stephen Sondheim’s  A Little Night Music—she asks, “Are you doing anything now?” “Yeah, I just did a film where I played a 1960s lesbian vampire,” Mallory says. “This business sucks,” Stritch replies.

It’s Stritch at her Stritchiest: swaddled in fur, showing off those stockinged gams that still refuse to quit, and parking her eyes behind a pair of those signature oversized glasses that look like two full moons resting on her face. Chiemi Karasawa, a veteran producer and script supervisor making her directorial debut here, honestly could have continued in this vein for the entire movie, and it would have been perfectly entertaining to watch.

But thanks to remarkable access to her subject, and a refusal to turn away during even the most personal moments, Karasawa has made something deeper: a portrait of Stritch just as the aging process is beginning to punch holes in her concrete dam of a personality. This movie is a reminder that even the toughest broad imaginable, a woman Broadway producer and director Harold Prince praises in Shoot Me for having “the guts of a jailbird,” can be blindsided by memory lapses and reduced to tears at the prospect of finally facing the end. Everybody dies. Despite all evidence to the contrary, that everybody will eventually include Elaine Stritch.

But to be clear: not yet. Despite health issues—Stritch has diabetes, which during this film leads to two hospital stays, one of which is documented on-camera—Stritch continues to work and to look forward. “It’s wonderful to be almost 87,” she says. “You can get away with murder.”

In keeping with that attitude, Karasawa doesn’t waste too much time wading through the specifics of Stritch’s career history. Old photographs, occasional video clips, and some choice anecdotes told by Stritch—including a particularly juicy one about John F. Kennedy—are sprinkled throughout the movie, providing enough context for the uninitiated to understand the breadth of a stage-and-screen career that has spanned nearly 70 years.

Shoot Me instead focuses on the now, that now being the period in 2011 and 2012 when Karasawa and her crew followed Stritch as she worked on the 30 Rock set and rehearsed for another of her cabaret acts at New York’s Cafe Carlyle, this one titled “Elaine Stritch, Singin’ Sondheim… Again. Why Not?” During those rehearsals and performances, the cracks start to show. At first, it’s just a matter of forgetting lyrics. Later, when her blood sugar drops so severely that she can’t speak intelligibly, and her music director, Rob Bowman, has to call the paramedics, the signs suggest that perhaps even the unstoppable Stritch can’t keep belting ’em out forever.

Yet somehow the spitfire always bounces back. Even though the audience can see how fragile she is before taking the stage, and how much she still struggles with alcoholism—“It’s such a warm, inviting heaven,” she says of drinking—she still gets out there, snaps on a smile, and if necessary, turns her forgetfulness into a gag that’s just part of the act.

Stritch has a reputation for being high-maintenance, to put it kindly. At times, she even bosses around the camera operators. “Don’t you think you’re awfully close to me, Shane?” she tells one. “I don’t know if this is a skin commercial or what.” But to her credit, and the filmmakers’ credit, the camera never gets turned off—even when her hair’s in curlers, her face is devoid of makeup, and she’s weeping in bed at Mount Sinai Hospital. It’s unsettling to see this hurricane of a human being reduced to such a tiny storm. But at least she’s still here. There are poignant reminders in the movie that not everyone is so fortunate, which makes Stritch’s resilience all the more remarkable.

There’s a moment in the film when James Gandolfini, a friend of Stritch’s, speaks with great admiration of her feistiness. “If we had both met when we were 35,” he says, that Tony Soprano twinkle still alive in his eyes, “I have no doubt that we would have had a torrid love affair that ended very badly.”

Since this documentary was shot, Gandolfini has died, and Stritch has moved out of Manhattan to Birmingham, Michigan, so she can be closer to family. Hopefully, she still has a long life ahead of her. But when she does finally leave this Earth, there’s something lovely about imagining a 35-year-old Gandolfini, his eyes twinkling just as they do in this movie when he speaks of her, greeting her warmly in heaven.