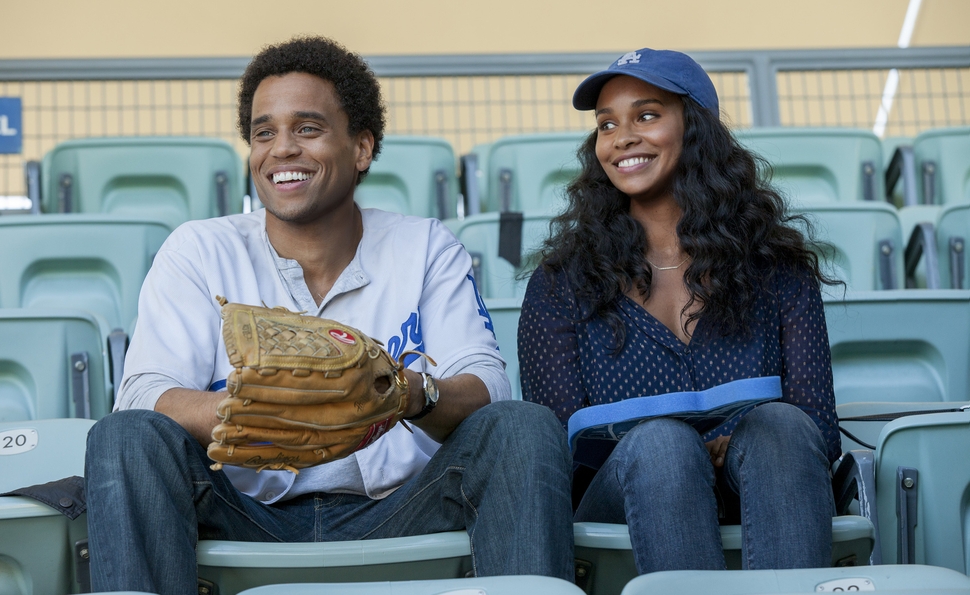 The first few minutes of About Last Night—a remake of the 1986 Demi Moore-Rob Lowe movie of the same name, adapted from David Mamet’s 1974 play Sexual Perversity In Chicago—ping-pong back and forth between two conversations with a zippy smuttiness that suggests maybe, just maybe, this new version could be more fun than the original.

In one conversation, Bernie (Kevin Hart) spills all the nitties and gritties about his previous night’s sexual adventures with Joan (Regina Hall), while chatting with his friend and co-worker Danny (Michael Ealy) over drinks at the Broadway Bar. In the other, Joan does the same thing with her roommate Debbie (Joy Bryant) as they make their way through city streets. The rapid-fire dialogue is funny, and vaguely Mamet-like, but sounds distinctly more 2014 than 1986; at one point, Joan describes Bernie as having “the John Legend of penises: impressive, but not threatening.” Eventually, the four meet at the bar. As Bernie and Joan argue, then drink heavily, then flirt gratuitously, Danny and Debbie decide to leave, and they run into one of Debbie’s exes. For his benefit, they pretend to be a couple. Suddenly, in that moment, they realize they’d like to get to know each other better.

That right there—the Danny/Debbie meet-cute that morphs into a hook-up, which then morphs into a relationship with all kinds of rom-com issues—is what’s wrong with About Last Night. The arc of the Danny and Debbie love story, which moves from tentative commitment to cohabitation to fighting approximately every 50 seconds, is a familiar one, not only from countless other movies, but specifically from the original About Last Night… As scripted by Leslye Headland and directed by Hot Tub Time Machine’s Steve Pink, the Ealy/Bryant Danny and Debbie largely walk the same miles, in almost the same shoes, as the Lowe/Moore Danny and Debbie: They deal with intrusive exes, pregnancy scares, and best friends with zero faith that their relationship will last. Between those familiar plot points and the predictable montages in which D-squared engage in sweet kisses and adorable tickle-fights, the movie threatens to drown in a sea of dreaded rom-com clichés.

Two things keep it from going permanently below sea-level, though: Kevin Hart and Regina Hall. While the filmmakers attempt to stay faithful to the core of the original movie—which, for the record, doesn’t hold up that well 30 years later, despite the enticement of Moore and Lowe tangled up and nude—they also actively diverge from it in some key ways, including switching the setting from Chicago to Los Angeles, and giving Bernie and Joan their own uniquely twisted, volatile romance. Hall and Hart have appeared together in several movies, including 2012’s Think Like A Man, but have never been paired as love interests. Here, they lock into a manic, improvisational groove from minute one. They have crazy sex, which sometimes involves wearing chicken masks, and they have insane blow-ups, which always involve a lot of shouting. The cutting remarks get lobbed between these two with such ferocity that all other parties best get out of the way, especially when the other party is a potential new girlfriend. (Joan takes one look at one of Bernie’s paramours and bluntly tells her: “You are making a brief cameo in a very tragic porno.”) Their dynamic is a marked, largely welcome change from the first movie, in which Bernie and Joan, played by Jim Belushi and Elizabeth Perkins, served mostly as wry but muted vessels for Danny and Debbie’s venting sessions.

Hart and Hall are sometimes a bit too much; Hart’s entire, increasingly successful career is based on the premise that he can be a bit much. But given how insufferable the rest of the movie gets, their combative energy gives the film a zing it desperately needs. At times, their relationship is even the more relatable of the two. When Joan and Bernie decide which sexual position to assume based on the outcome of rock-paper-scissors, that feels like a more recognizable depiction of the act of lovemaking than the moment when Debbie and Danny knock all the dishes off a table so they can do the deed. (Who does this in real life? Also: Those were really nice plates!)

The new About Last Night clearly wants to honor the old. At one point, Ealy and Bryant can even be seen watching the original on TV. But it needs to embrace the new more often. The first film was Danny and Debbie’s story. It becomes increasingly clear while watching the 2.0 version that this one should have belonged to Bernie and Joan.