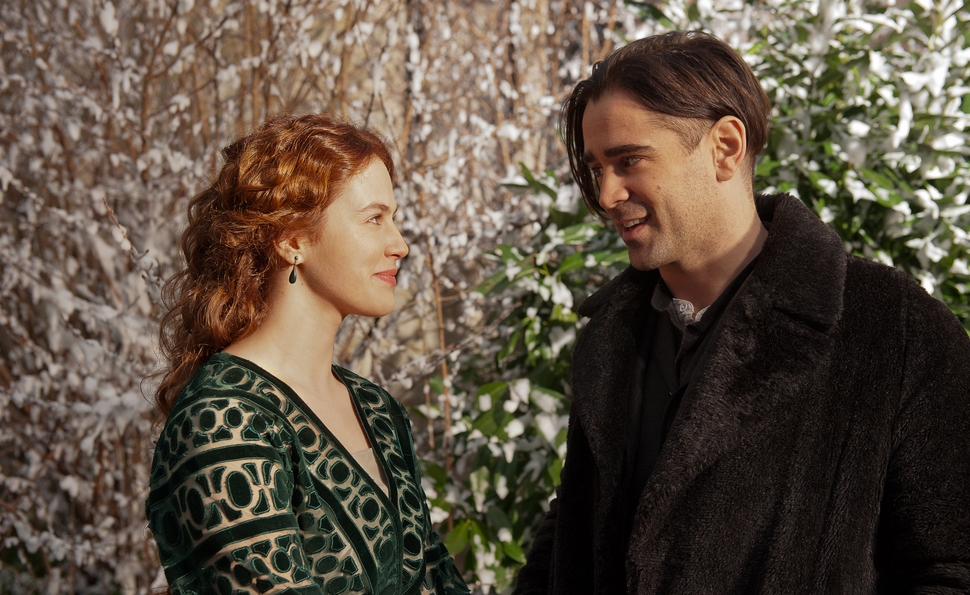 When a movie declares in its first minute, via voiceover, that “magic is everywhere,” it’s pretty safe to say viewers are being encouraged to check their senses of disbelief in the lobby. If that opening weren’t enough to reinforce the “just go with it” directive of Winter’s Tale’s tagline—“This is not a true story. It’s a love story”—the appearance of a flying white horse shortly thereafter should drive the point home. The current trendy term/warning label for such a film is “supernatural romance,” but Winter’s Tale is really just a plain old fairy tale, complete with love at first sight, an enchanted animal sidekick, and unambiguously evil black-hatted villains, most of whom helpfully wear actual black hats throughout the film. Hell, there’s even something called a “princess bed,” referred to several times with utmost seriousness.

Based on Mark Helprin’s 1983 novel of the same name, Winter’s Tale is the directorial debut of screenwriter Akiva Goldsman, who made his career adapting popular books, from The Client to The Da Vinci Code to A Beautiful Mind (which won him an Oscar). Goldsman also wrote the screenplay for Winter’s Tale, which does an admirable job of streamlining a novel that spans more than a century, and he gives it a pretty storybook aesthetic that goes nicely with the unabashedly heightened material. Whether viewers cotton to that material is dependent on their tolerance for open-hearted melodrama, everything-is-connected didacticism, and simplistic, capital-letter notions of Good and Evil.

The winter-set tale in question centers on Peter Lake (an oddly cast Colin Farrell, shooting for boyish charm even though he’s pushing 40), an orphan-turned-thief in 1916 Manhattan, on the run from hulking baddie Pearly Soames (Russell Crowe, attempting to out-brogue Farrell). Peter has a couple of nominal distinguishing characteristics—he’s good with machines, and has an unexplained connection with a magical white horse he encounters while on the run from Pearly’s goons—but he’s a pretty standard Romantic Hero, dutifully plodding along the path of his destiny. That path leads him to Beverly Penn (Downton Abbey’s Jessica Brown Findlay), a wealthy young woman with consumption. Beverly’s condition not only places an expiration date on her romance with Peter, it also gives her a sort of fever-vision that drapes lens flare and a golden glow over everything she sees, a visual Goldsman takes advantage of frequently, usually to nice effect. (Occasionally, though, it tips over into Thomas Kinkade-esque light-paintings.)

But impending death isn’t the only thing complicating Peter and Beverly’s romance: There’s also the matter of a future miracle, something the audience is told many times that Peter possesses the potential for, and which Pearly is determined to deny him. Pearly’s obsession with preventing the miracle he believes Peter and Beverly’s romance will spawn is explained with the revelation that he’s a demon, living on earth among other demons and doing the devil’s work. (Lucifer’s identity is a great piece of stunt-casting best left unspoiled.) Or, as Pearly proudly proclaims, he’s “been blackening souls and crushing miracles for longer than I can remember.” That claim reveals the level of nuance in Winter’s Tale’s central conflict—and also its eternal nature, which lets the story skip ahead 100 years for its present-day third act. Suffice to say, the events that happen there—Peter, alive and unchanged save for amnesia that robs him of his memories of Beverly, meets a single mother (Jennifer Connelly) with a terminally ill daughter—are connected to those that happened in 1916.

Arriving in theaters on Valentine’s Day, Winter’s Tale makes no bones about its mission to propagate the fairy-tale fiction of Love As Destiny, a thin narrative gruel the film makes little effort to enhance, beyond some visual flair. It looks nice and goes down easy—and with a few hearty laughs for more cynical viewers—but has little narrative substance or emotional sustenance. It’s a greeting card of film, full of platitudes and pleasant imagery, and destined to be thrown in a drawer and forgotten in short order.