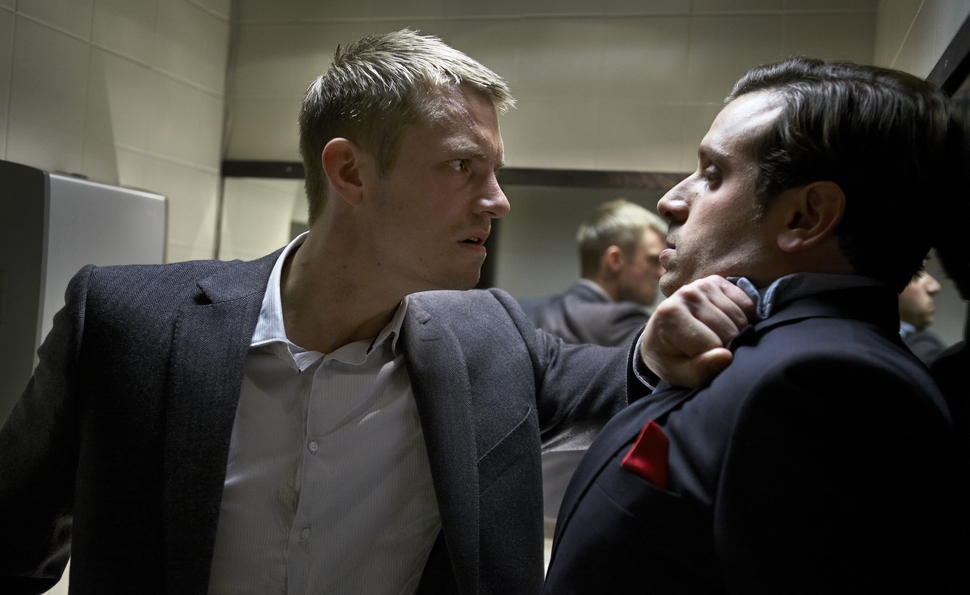 Three generations ago, in an era when Sweden’s most popular cultural export in America was the children’s novel Pippi Longstocking, each episode of the radio show The Shadow was preceded by the finger-wagging advisory, “These half-hour dramatizations are designed to forcibly demonstrate to old and young alike that crime does not pay.” The 2012 Swedish import Easy Money: Hard To Kill carries no such warning, but it feels every inch as didactic as those old radio shows, or gangster films made under the Hays Code. Rarely has a life beyond the law seemed less enticing than it does in Babak Najafi’s bleak crime picture. It’s unrelentingly intense and utterly humorless, but there’s no denying the skill and brio with which it unspools.

Shame about that American title, which suggests a Woody Harrelson vehicle from his comedic-actor days, bolted to a Steven Seagal picture from his theatrical-release-film days. No money changes hands easily in this film, ever. Snabba Cash II, the film’s native-language title, looks like the name of a fading rapper’s heir and sounds like Jabba the Hutt cursing, but at least it’s memorable. At any rate, this is the middle chapter of a trilogy extrapolated from Jens Lapidus’ crime novels Snabba Cash and Aldrig Fucka Upp; the first film, Easy Money, came out in Sweden in 2010, while the final installment, Easy Money: Life Deluxe, hit Swedish theaters in 2013.

The prerequisites turn out not to matter much. Najafi, inheriting the reins from Easy Money director Daniel Espinosa, establishes the main criminal quintet in a few efficient strokes. Most of the key outlaws from the prior film return: JW (RoboCop-elect Joel Kinnaman), an economics student turned drug runner, is about to be released from prison. He hopes a financial software application he’s developed during his time inside will let him go straight. Mrado (Dragomir Mrsic), a former legbreaker for the Serbian mob, is JW’s crippled cellmate and partner. Mahmoud (Fares Fares) is a low-rung thug, disowned by his family and massively in debt to a Serbian drug kingpin. Jorge (Matias Varela) becomes a hunted man after a drug deal he’s planned goes sour. In the carnage that follows, he accidentally rescues a hooker who’d been held in bondage by her murderous pimp.

While it takes nearly the entire running time for the characters’ relationships to completely reveal themselves, that disorientation actually contributes to the powerful sense of menace. Najafi uses predominantly handheld photography to immerse the audience in his claustrophobia-inducing Babel. Most of the dialogue is in Swedish or Spanish, with smatterings of other tongues. (Relying on the English subtitles gets confusing in scenes where characters deliberately speak a language they know, but that another character in the scene doesn’t understand.) The judicious application of flash-forwards that jump just moments ahead reinforce the sense of grim inevitability—and also papers over the plot’s heavy reliance on coincidence.

It’s likely that the panoply of languages and unfamiliar locales (Stockholm, Gothenburg, Hamburg) may give American viewers a sense of exoticism that makes Easy Money: Hard To Kill seem more original than it really is. The picture isn’t radically inventive; it’s the sequel to an adaptation of a novel that borrows from nearly a century of American pulp fiction. But it’s taut and vivid. The grimy window it opens onto a desperate, dangerous lifestyle makes viewers feel like accomplices.