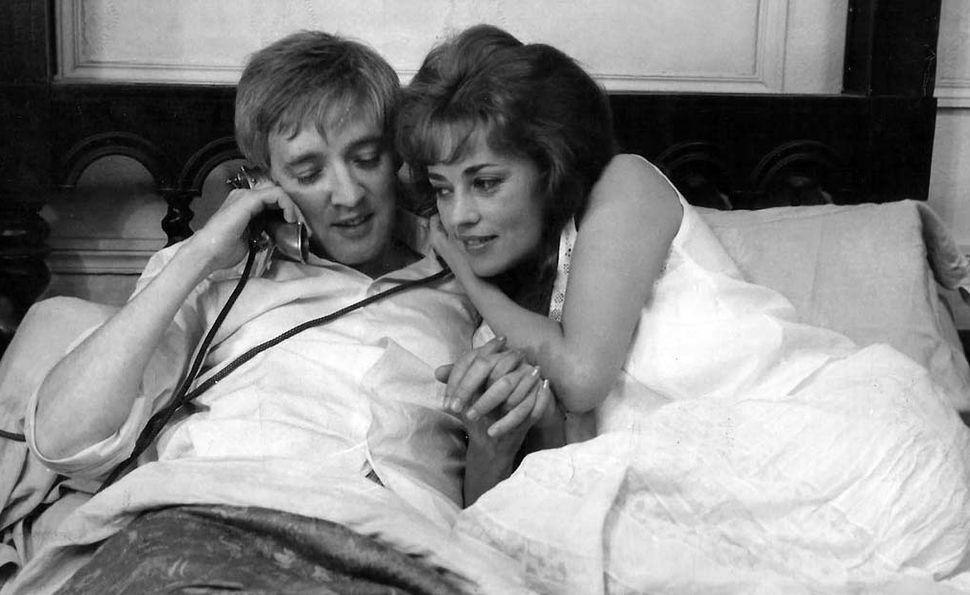 François Truffaut’s Jules And Jim is many things, not least among them a modernist Pygmalion. The eponymous characters, Jules (Oskar Werner) and Jim (Henri Serre), bohemians with money in Belle Époque Paris, are besotted with a work of classical statuary, a woman with an enigmatic smile. When the beguiling free spirit Catherine (Jeanne Moreau), the living embodiment of their ideal, saunters into their orbit, the best friends are electrified. Her life force jolts them—and the movie—to life. Can a woman love two men at once and not come between them? Can the men’s friendship withstand her volatility? Jules and Jim are the bridge; Catherine is the troubled water.

Their story begins in Paris in the heady years before World War I, when the city was the modernist’s laboratory for art, literature, and music, a magnet for intellectuals such as the Austrian Jules. Though he’s described as the Sancho Panza to Jim’s Don Quixote, Werner’s Jules dominates the screen with a fierce passivity in the film’s early scenes. French isn’t his mother tongue, and he speaks haltingly, unlike Serre’s Jim, who talks fast and picks up girls even faster. When Catherine arrives, both men are drawn to her; Jules marries her, but she loses interest in him. Then the war begins, and the two men fight on opposite sides. Finally, they adopt an unconventional domestic arrangement, as Jules nudges Jim toward Catherine to keep both near.

Truffaut’s third feature film is modernist in form as well. Where artists like Pablo Picasso and Juan Gris collaged found objects and newspaper clips to create their Cubist canvases, Truffaut intercuts footage from silent movies to suggest the period milieu. Juxtaposed with the sun-dappled sequences of cameraman Raoul Coutard, the found footage gives the film its Belle Époque authenticity. It’s a period film, not a costume drama. Truffaut said he wanted it to resemble an “old photo album.” The film’s numerous freeze-frames—mostly of Moreau’s planar face and lush pout captured from different angles (also a Cubist technique)—create that effect.

In one of Moreau’s greatest performances—and 60 years after the fact, one of the great screen characterizations in movie history—she plays a woman who follows her desires and not the rules, a sexual conqueror and tyrant (is her name an allusion to Catherine the Great?), and a drama queen who finds her power in dominating others, in always claiming the center of attention, not caring whether she’s unsympathetic. Like the siren of Greek mythology, Catherine draws men to her. She pulls Jules and Jim out of smoke-filled cafes into the fresh air. The men abandon their philosophical debates to follow her as she instigates footraces, bicycle rides, mayhem, and music. In this pas de trois, she leads, they follow.

Truffaut uses the soundtrack narratively to suggest the film’s shift from a celebration of the era to an ultimately rueful elegy for it. Georges Delerue’s bittersweet score opens with carousel music befitting a slapstick movie, and proceeds to romantic longing. “Le Tourbillon” (the whirlpool of life), Catherine’s siren song, conveys the film’s dominant theme. It’s the ballad of a man’s attraction to “the femme fatale fatal to me,” of man and woman coming together and coming apart in the whirl of life. The song hints at the film’s fearful geometry: the ménage a trois of Jules, Jim, and Catherine caught in the opposing currents of the whirlpool encircling them. “The triangle in the circle,” as Truffaut nicely put it.

To a college-aged cinephile, Jules And Jim plays like a romantic triangle tinged with levity and gravity—its tempo fast, as in comedy, its shadows long, as in drama. On second sight, more mature moviegoers might view it as a case study in romantic triangulation, with Catherine pitting the clinging Jules against the independent Jim, whom she takes as a lover. There are psychological and psychosexual nuances that an inexperienced 18-year-old might miss: Is Catherine erratic, or certifiably crazy? Are Jules and Jim homosocial or homosexual? In the scene where Catherine dresses as a boy, does she both turn them on and turn them? One line in the film alludes to this: Jules muses on the difference between German and French gendering of words. In German, unlike in French, war and moon are masculine, while love and sun are feminine. Life, on the other hand, is neuter. Jim responds: “The neutral life—it is very pretty, and above all, very logical.”

An even more seasoned viewer might see in it an allegory of the sweetness of the prewar years of artistic and social experimentation, and a premonition of fascism in the melancholy postwar years with the newsreel sequence of Nazis burning books. Is Catherine, who needs control—and acolytes—a forewarning of Hitler? Germaine Greer may have thought so. She ended a 2008 piece on the film with,  “I hope I am not wrong in thinking that most people seeing Jules And Jim for the first time will find the ending to be not an act of poetic justice, but the final atrocious act of an indulged and destructive narcissist.” Amen, sister.

Criterion’s Jules And Jim Blu-ray looks crisper than most prints of this film, and the set’s standard DVD looks darned fine. The sound synchronization on the Blu-ray seems a frame off, but the wealth of extras—including probing interviews with Truffaut in 1965, 1969, 1997, 1979, and 1980—reveals that the director post-dubbed the dialogue of all his early features, which would account for the barely discernible lag. Other extras include John Powers’ sprightly essay, updated from his original 1992 Criterion liner notes, and Truffaut’s 1981 essay on Henri-Pierre Roche, author of the semi-autobiographical Jules And Jim and of Two English Girls, which Truffaut adapted into a 1971 film. Roche, the model for Jim, was an artist, art collector, and journalist famous for his aesthetic liaisons (e.g., introducing Gertrude Stein to Pablo Picasso, encouraging Stein to continue “Three Lives”) as well as his amorous ones. The Truffaut essay on Roche also reveals that Franz Hessel, the German-born translator of Proust into German and Walter Benjamin into French, was the model for Jules; Hessel’s future wife, Helen Grund, who translated Lolita into German, was the model for Catherine.