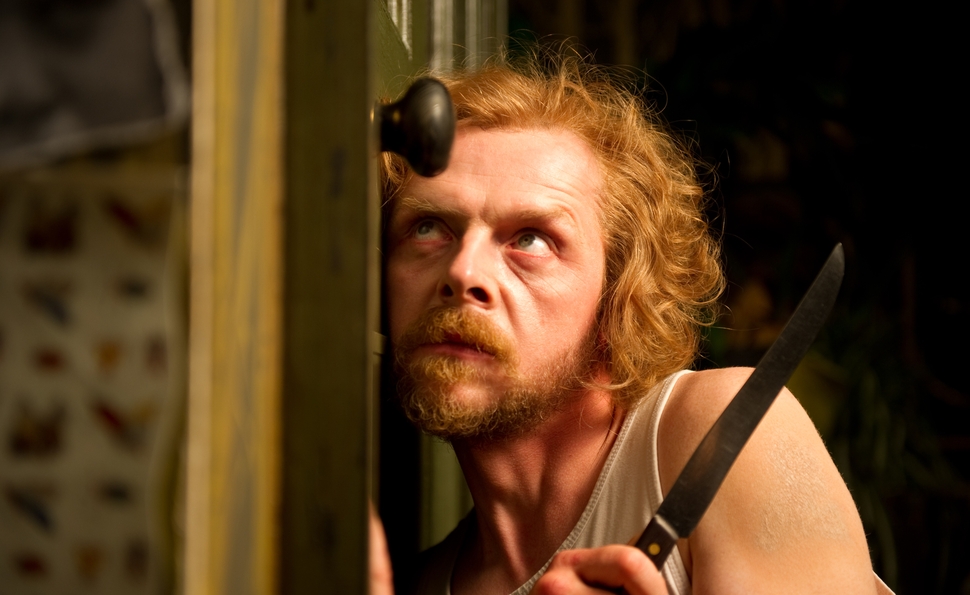 A Fantastic Fear Of Everything

The first act of A Fantastic Fear Of Everything is basically the last act of Repulsion: Haunted by a vivid imagination and past trauma, a man hides in his increasingly decaying apartment, plunging from one room to another with weapon in hand, trying to ward off things that aren’t there. But where Catherine Deneuve’s descent into insanity in Repulsion takes time, Fantastic Fear starts with the hysteria already revved up to engine-melting speeds. And where Repulsion only suggests the causes of madness, and leaves the protagonist’s disintegrating mental state as a compelling, horrifying mystery, Fantastic Fear explains, and explains, and explains—and then stops, right at the point where explanations might be useful. The poorly reviewed British film, first released in the U.K. in 2012, recently arrived on VOD and is abruptly getting a limited American theatrical run. But watching it, it’s easy to see why there wasn’t more of a rush to get it to larger audiences, even the ones most captivated by The World’s End/Star Trek star Simon Pegg.

Pegg gets the stage mostly to himself as Fantastic Fear protagonist Jack Nife (Oy.), a successful children’s author who hates his career, and has been trying to escape by writing a series of screenplays called Decades Of Death, heavily based in the true-life tales of Victorian serial killers. But the horrors his research has uncovered have left him phobic, panicked, and nightmare-ridden, certain that Dr. Crippen is going to leap out of his closet and dismember him at any moment. When his agent Clair (Clare Higgins) arranges a meeting with an influential BBC producer, the challenge of donning clean clothes and crossing the city seems insurmountable to Jack, whose life consists largely of running around his own home in filthy underwear, shrieking and stabbing at the curtains and bedspread every time they stir in an errant breeze. Eventually, after a lot of voiceover fretting, one-man-show slapstick, and ludicrous mishaps, he accepts that clean clothes will necessitate a trip to a public laundry facility, at which point the story suddenly decides he has a crippling fear of launderettes, which must be overcome at great length.

The storyline in Fantastic Fear Of Everything is always that clumsy and arbitrary; it proceeds from one hunk of story to the next as if a variety of authors are bending the narrative in their own directions, exquisite-corpse style, without having read more than a few pages back in the screenplay. Nothing about the setup makes sense: Jack is impossibly dysfunctional, but to judge from the wearying voiceover exposition, this is a relatively new development. Then the second act, in the launderette, suggests his problems are lifelong issues rooted in childhood trauma. The third act, which yanks in a bystander (Amara Karan) and abruptly turns the story into an intimate thriller, drops the dysfunction, as if identifying the childhood source has erased the adulthood problem. None of this would necessarily be a problem if the storyline was cohesive, or the emotional resonance made any sense. But Fantastic Fear leaps all over the place narratively and conceptually, servicing the comedy of every individual scene without considering or linking the others.

Some of those individual scenes are marvelous, though. First-time directors Crispian Mills and Chris Hopewell have a strong visual aesthetic, with deep, intense colors and precise use of gimmicks like slow motion and stop-motion. The music is more problematic. It’s no surprise that they both think in terms of foregrounding music: Mills, who also scripted, is a successful British singer-songwriter-guitarist. Hopewell, an experienced commercial director, cut his teeth on music videos for Radiohead, Scissor Sisters, The Killers, and Franz Ferdinand. But their use of popular songs is intrusive to the point where some scenes play like music videos, particularly when Jack strolls down the street to Ice Cube’s “Wrong Nigga 2 Fuck Wit,” or a late-arriving character makes ridiculous use of Europe’s “The Final Countdown.” The images are always visually compelling, even during the periodic stretches when nothing else about the story is.

Pegg’s partnership with Edgar Wright (Shaun Of The Dead, Hot Fuzz, World’s End) has given the actor plenty of chances to prove that he’s a charming, versatile performer. But it’s hard for him to prop up something this heavily based in set dressing and striking imagery, with so little thought for cohesion or his character. Asked to run back and forth for half an hour, talking to himself and eventually super-gluing a knife to his hand, he gives the film a manic, babbling energy and some sense of momentum. Most importantly, he’s funny, whenever the script lets him be funny, and Mills and Hopewell get the camera right up into his face, letting his charisma take over the entire screen. But his character doesn’t even rise to the level of caricature or cartoon, and there’s only so much he can do with what feels like a particularly hectic improv session. Mills and Hopewell give the sense that they have boundless ambition as filmmakers, and strong talents to go with them. But like Jack Nife, helplessly paralyzed by the implications of his own writing project, they might be better off letting someone else pick their material.