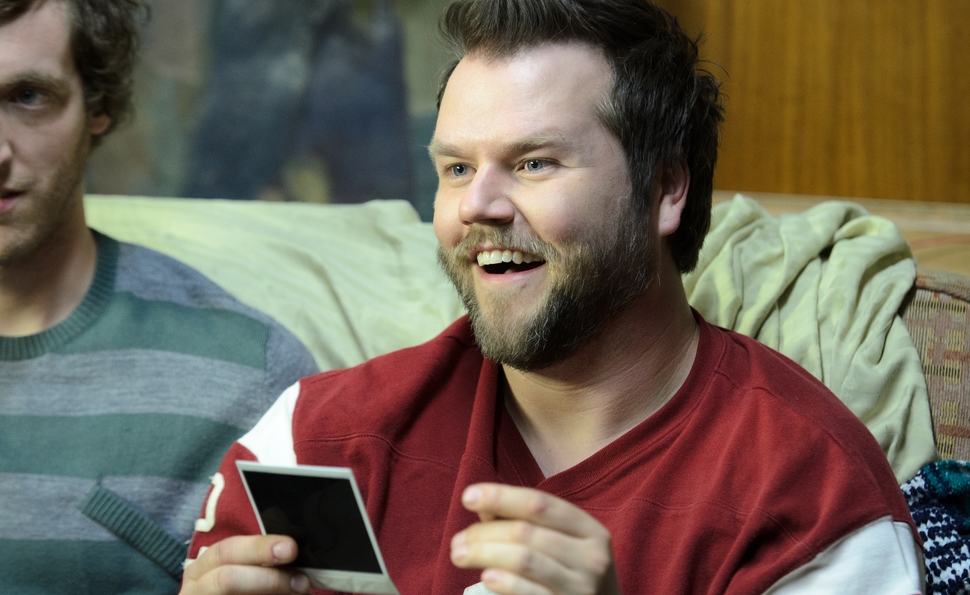 Writer-director Rob Pearlstein stages Barry’s early misbehavior with TV-sitcom-grade visuals, but just enough creative profanity to keep the proceedings sporadically chuckle-worthy. When the ornately filthy Barry goes into a detailed digression about how he created the epithet “twunt,” it’s hard not to be mildly amused with the character’s clueless nastiness. Someone Marry Barry coasts along on such gags until Barry’s three friends decide that in order to save their own faltering personal lives, they need to escape their ne’er-do-well pal—specifically, by finding him a bride who’ll be forced to put up with his nonsense forever. That leads to dating mishaps—including a speed-dating montage—in which the game Labine delivers hilarious blunt-talk to his prospective mates, but true love doesn’t become a viable possibility until he experiences an unlikely cab-ride meet-cute with Melanie (Lucy Punch), a Brit with an equally foul mouth and lack of interest in propriety.

Labine and Punch have a natural curse-for-curse chemistry that suggests Someone Marry Barry might actually push past the now-standard juvenile-men-grow-up template. But no, once Pearlstein pairs off Barry and Melanie, he resorts to stale second-act crises that throw everyone’s sense of stability into disarray, forcing Barry and Melanie to reconsider their immaturity, what’s important to them, and all sorts of similar gibberish that murders any remaining humor. The way the film hews to tiresome conventions is itself a buzzkill, but worse is its sheer lack of energy, as Pearlstein stages serious and/or heartfelt conversations that go on twice as long as necessary and treat the characters as more than the two-dimensional caricatures they actually are. By not remembering that its only trump card is its creatively smutty way with words, Someone Marry Barry instead eventually falls on its face dispensing the very clichés—about love, friendship, loyalty, tolerance—a real “Barry” would waste no time on.