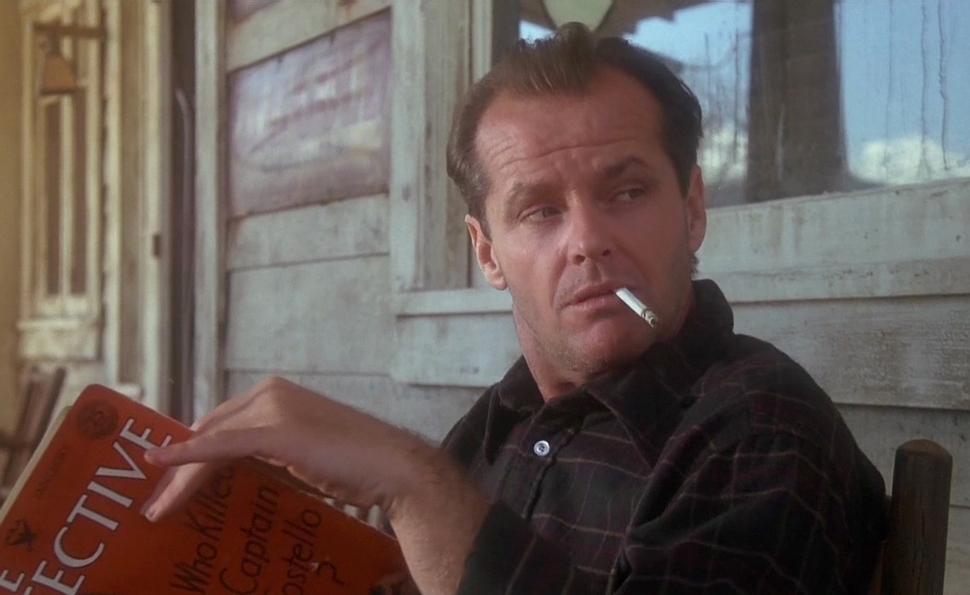 James M. Cain was in his 40s when he wrote his first published novel, 1934’s The Postman Always Rings Twice; at that point, he had already been a reporter, an editorialist, and a humorist. The book became a blueprint for a new kind of American story: a tale of an ordinary man with loose morals and a semi-shady past, who gets in over his head because of a woman, a criminal opportunity, or both. By the time Postman was adapted into a Hollywood movie in 1946, Cain’s terse language and hardened tone was starting to take over the movies, in the form of film noir. Also by the time the Hollywood version came out, Cain’s book had already been adapted twice overseas, as the 1939 French film Le Dernier Tournant and as Luchino Visconti’s 1943 masterpiece Ossessione. That’s how much impact Cain’s slim, tawdry little novel had.

Bob Rafelson’s 1981 version of The Postman Always Rings Twice arrived long after the first noir wave had subsided, and toward the beginning of what came to be known as neo-noir, a genre that picked up momentum later in the decade. The film stars Jack Nicholson, who worked with Rafelson on the director’s best work at the start of the 1970s (most notably Five Easy Pieces), and whose starring role in Chinatown had proven that neo-noir was viable. In Postman, Nicholson plays Frank Chambers, a down-on-his-luck drifter taken in and given a job by a boisterous, cloddish immigrant gas-station owner named Nick Papadakis (John Colicos), whose young American wife Cora (Jessica Lange) catches Frank’s fancy. Soon, Frank and Cora are plotting Nick’s demise, imagining a life for themselves as a married couple running a profitable small business.

Rafelson turned the screenwriting assignment over to Cain fan David Mamet, who’d never written a movie before, but who’d already developed a reputation as a playwright who understood the rhythms of human speech. (On the Postman Always Rings Twice Blu-ray, Mamet says he modeled his first screenplay after Ernest Hemingway’s advice to young writers: “Write the best story you can, and then take out the best lines.”) The mission of the 1981 Postman team was to forget Hollywood and get back to Cain, in all his squalor, desperation, and sweaty lust. At the time, the movie raised eyebrows for its violent sex scenes between Frank and Cora. It also produced howls of derision from many major American critics, who felt Rafelson had sapped all the energy out of noir and replaced it with cheap smut and prolonged, pointless naturalism.

That middling-to-dismissive response to Rafelson’s The Postman Always Rings Twice may have been a case of the film being out of step with its times. With its earthy Sven Nykvist cinematography and its emphasis on the character’s rumpled clothes and weathered homes, this Postman is like something from the Rafelson of 10 years earlier: pensive and realistic. The disconnect between Rafelson’s low-key style and Cain’s hard-boiled storytelling is jarring at times, and because most of the major plot points are dispatched in the first hour, after a while, it starts to feel like the movie has no structure, and that it could just keep rolling on and on. But then it does end (altering Cain’s original ending only slightly), and it becomes clearer that this was never a film about murder, but about two lonely people who find each other in a place where they’re not allowed to be together.

The 1981 Postman Always Rings Twice compares well to Todd Haynes’ recent HBO miniseries adaptation of Cain’s Mildred Pierce, in that it’s less interested in the broad strokes of the story than in Cain’s grasp of detail: how a restaurant is run, how difficult it is to plan and execute a crime, and the hard physical labor that goes into work, sex, and killing. Mostly, Rafelson emphasizes the fragility of Frank and Cora’s affair. Early on, Cora practically begs Frank to help her get free of Nick, who isn’t a terrible person, but is oppressive to her, with his loud laugh and his desires. But nothing comes easy for these two, and more than anything, Rafelson’s Postman is about how it feels to pine for a pipe dream.

The only major extra is a new commentary track with Rafelson, Mamet, and Nicholson—each recorded separately. It doesn’t run for the full two hours; the comments play over an abridged version of the film, running for about 80 minutes total. But the three men are fun to listen to, with their deep, gravelly voices and their general inclination toward frankness. They talk about the legal troubles that derailed Rafelson’s movie career for years prior to this project, which Nicholson initiated in part to rescue his old friend. Rafelson cops to his reliance on insert shots, and his attraction to ladies’ hindquarters. (“I’m sort of an ass-conscious person.”) All of them talk about their desire to capture the raw sexuality of Cain’s novels, which they felt had never been conveyed onscreen before, and which may have been the reason the film was a bigger hit with critics in Europe than in the United States. “Americans like sexy movies,” Nicholson growls. “But they don’t like sexual movies.”