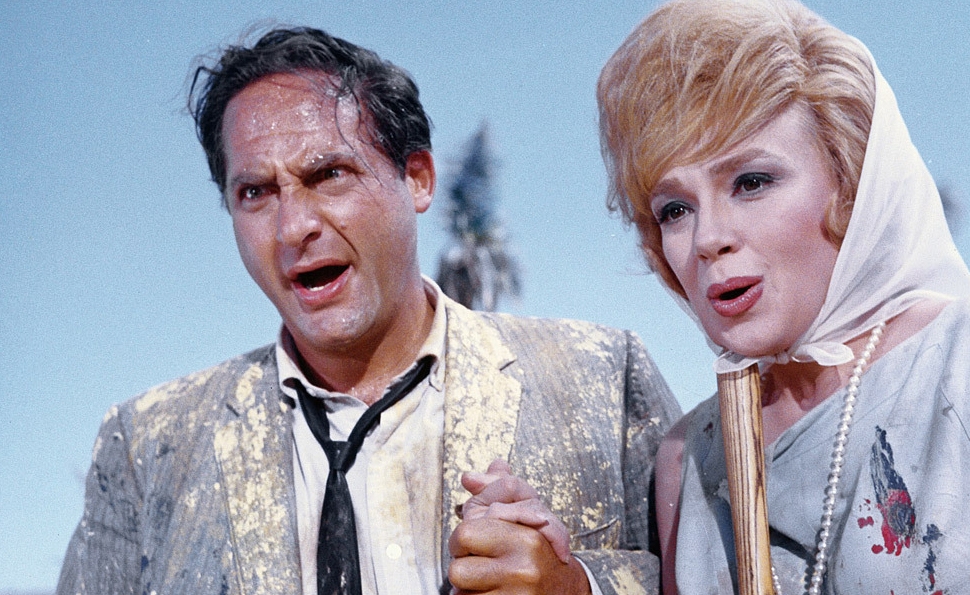 Stanley Kramer’s epic 1963 comedy It’s A Mad, Mad, Mad, Mad World—which Criterion has just released in an appropriately excessive five-disc (three DVD, two Blu-Ray) version—has a complicated, contradictory legacy. During the 51 years since its initial release, the ultimate ensemble comedy has aired in a seemingly constant loop on television. Homages to the film include 1979’s Scavenger Hunt, 1987’s interactive Million Dollar Mystery (which let audiences hunt for cash along with the film’s characters, with a $1 million bounty offered for the viewer who first discerned the location of the film’s buried loot), and 2001’s Rat Race—all of which owe so much to Mad World, they border on unofficial remakes. (The Simpsons episode “Homer The Vigilante” essentially borrowed its last act from Kramer’s film, too.)

But Mad World’s cultural impact can be felt widely outside its direct homages: in the orgiastic frenzy of automotive destruction in the similarly ubiquitous The Blues Brothers, but also in the more or less universally reviled vehicular slapstick of Steven Spielberg’s 1941 and every other film that filled the screen with choreographed, motorized mayhem. That’s part of Mad World’s mixed legacy: Many of the trends it helped popularize became, over the following decades, blights on movie comedy. The film is a cherished piece of Americana, but viewers—particularly critics—had a less-favorable attitude toward many of the stunt-fueled, car-chase-heavy, big-budget, broad, spectacle-rich slapstick comedies that followed. The Stanley Kramer-directed comedy didn’t invent any of these elements, but its success and endless second life played a big role in making them into fixtures of mainstream comedies.

More than anything, though, It’s A Mad, Mad, Mad, Mad World embodies comic hugeness, for better or for worse. It isn’t the best comedy of all time, but it’s one of the largest and broadest. Everything about it is big. First: the unprecedentedly famous ensemble, which included just about every prominent funny person of the time—Sid Caesar, Phil Silvers, Milton Berle, Mickey Rooney, Ethel Merman, Dick Shawn, Terry Thomas, Spencer Tracy, Peter Falk, Don Knotts, Carl Reiner, Buster Keaton, William Demarest, and the proverbial cast of thousands, including more than a hundred speaking roles. Second: the runtime. The film was hacked down from an original cut of five hours. It’s the rare non-drama that includes both an opening overture and an intermission, and those are featured in one of the shortest cuts, a wide-release version that runs a mere 163 minutes. Third, the format: Mad World was released in 70mm, after being filmed in “Ultra Panavision.” The format is more associated with massive epics than slapstick romps, but Mad World is both.

And fourth, the tone: It’s an orgy of sweaty slapstick, over-the-top mugging, and vaudevillian shtick-slinging. Once things get going, they’re perpetually in overdrive as an ever-increasing cast of kooky caricatures chase the money with sweaty, wild-eyed desperation. The film is emotionally pitched at a level of hysteria. At its best, it attains a fine, frothing comic frenzy that becomes self-perpetuating. At first, the film’s bigness works against it, but once it builds up a pleasing velocity in its third act, the momentum snowballs—it’s as much an asset as the famed cast—and Mad World becomes an unstoppable anarchic force. The Criterion edition features, among many wonderful extras, new illustrations by Jack Davis, and the film captures the Mad staple’s genius for creating tableaux of controlled chaos, spilling out ideas in all directions.

It’s A Mad, Mad, Mad, Mad, World was nominated for six Academy Awards, and ranks 40th on The American Film Institute’s 100 Greatest Comedies. But it’s hard to imagine a more dramatic leap, in substance or commercial fortunes, from the director’s dour, more characteristic 1961 drama, Judgment At Nuremberg, to his follow-up. While its predecessor lost money, It’s A Mad, Mad, Mad, Mad World turned a huge profit on its theatrical release alone; adjusted for inflation, it currently ranks 82nd on Box Office Mojo’s list of the all-time 100 biggest earners, with an adjusted gross of almost half a billion dollars in today’s money. Before Mad World, critics weren’t expecting a light comedy or a gaudy profit from Stanley Kramer, whose name remains synonymous with social-issue dramas like Ship Of Fools or Guess Who’s Coming To Dinner, rather than wild comedies. Mad is a striking anomaly on his résumé, sort of: He still couldn’t make a film this massive without trying to hammer home some Very Important Themes. And while he makes unsubtle points about greed and the all-American mania for wealth, those heavy-handed messages take a backseat to elegantly choreographed slapstick of both the human and motorized variety. For once, Kramer was more intent on entertaining audiences than educating or uplifting them, and the film is better for it.

Mad World follows the machinations that ensue when a group of motorists encounter “Smiler” Grogan (Jimmy Durante), an ex-convict who dies in a car crash in the Mojave desert, after revealing cryptic clues about the final location of a stash of money purloined during the robbery of a tuna factory many years earlier. His dying confession transforms seemingly sane human beings into money-crazed lunatics. The sense of competition doesn’t stop with the film’s fortune-crazed characters; it also extends to the cast. Each actor seems intent on stealing the most star-studded comedy of all time. Still, none of the giants make as indelible an impression as Jonathan Winters, who turned in one of the all-time great cinematic debuts as Lennie Pike. In the most impressive setpiece in a film full of them, his good-natured bear of a truck driver literally tears a gas station apart with his bare hands.

In scenes like that, Mad World has the sublime simplicity and gorgeous desert vistas of a Looney Tunes Roadrunner cartoon. In its first two acts, the treasure-hunters group into an ever-changing series of combinations. In the third act, seemingly half of Southern California, along with a goodly percentage of the Shriner’s Club, sets out in search of the loot, building to a crashing comic crescendo.

It’s A Mad, Mad, Mad, Mad World is a bit of a one-joke, one-note movie. It hammers home a specific, seemingly limited variety of slapstick involving hours of desperate people flagrantly misusing vehicles. The frenzy and intensity should be exhausting, and sometimes it is. But eventually, it comes around to being exciting, even exhilarating. It succeeds through excess and through maddening but ultimately cathartic repetition.

The film’s complicated legacy extends to every subsequent star-studded automotive comedy where the car-stunt coordinator was as important as any of the actors—the Cannonball Run movies, for instance. In that respect, Mad World is a victim of its success: It did stunt- and car-based comedy on a massive scale so definitively that its followers couldn’t help but seem deficient by comparison. John Landis had to destroy half of Chicago in The Blues Brothers just to get people to concede that he’d made it into the same ballpark as Mad World.

It’s A Mad, Mad, Mad, Mad World left behind a mixed legacy, but for a strange, wonderful, brief epoch in American comedy, grand spectacle and the most excessive deployment of star power in American comedy history was the formula for an enduring hit. It remains a technological and creative marvel for reasons beyond its sometimes fitful ability to make audiences laugh.

Criterion has really outdone itself with this set: The features alone more than justify the cost. It includes both the 163-minute wide-release version and a 197-minute restored version, with dense, insightful commentary from experts Mark Evanier, Michael Schlesinger, and Paul Scrabo.

Other highlights includes a series of radio and television commercials written by Stan Freberg (who also appears briefly in the film); an entertaining 2012 Billy Crystal-hosted reunion featuring ancient alums Reiner, Freberg, Winters, and Rooney, who launches into ex-wife jokes apropos of nothing; and a surprisingly compelling featurette on the groundbreaking special effects and sound work.

Winters not only steals the film, he steals the bonus features as well. The late cult icon figures prominently in two 1963 episodes of Telescope, a cinéma vérité-style Canadian television show that features fascinating footage from Winters, at the height of his creative and professional peak, improvising brilliantly and extensively during the film’s appropriately epic press junket. Winters is also one of the guests of honor during a 1974 talk show that features him trading wild stories with host Kramer and co-stars Caesar and Hackett about the making of the film. In all, the features not only pay loving tribute to It’s A Mad, Mad, Mad, Mad World, they constitute a genuine pop-culture event.